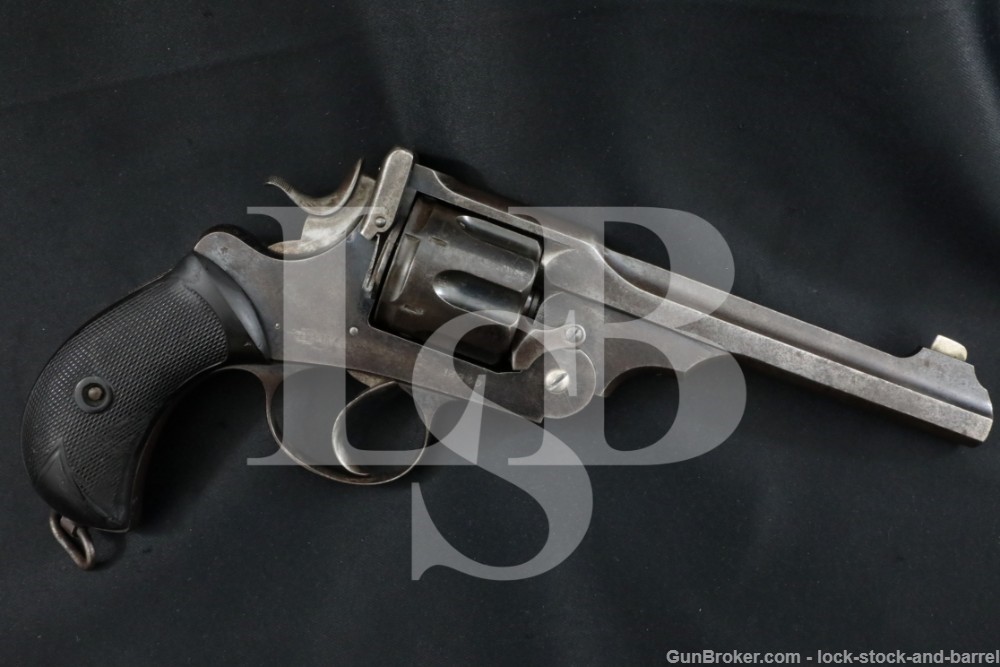 Stock Configuration & Condition: The grips are checkered black vulcanite on a bird’s head grip frame. There are a few areas of repaired material loss including the top rear of the left and right panel and on the front of the right panel as well. The smooth borders of each panel show nicks and scratches. The checkering shows wear but is generally well defined. The grips are in about Good-Very Good overall condition as repaired and Antique.

Bore Condition: The bore is dim scattered erosion and pitting. The rifling is defined.

Overall Condition: This handgun retains about 20% of its metal finish. There is surface oxidation all throughout the metal surfaces. There is pitting on many of the leading edges, notably on the barrel. There are nicks and dings throughout the metal. There is thinning at all leading edges. The cylinder shows similar imperfections and has a distinct turnline. The grip straps show a deep, dark patina. The screw heads range from sharp to lightly tool marked with strong slots. The markings are all clear. Overall, this handgun rates in about Good condition as Antique.

Mechanics: The action functions correctly. The cylinder lockup produces hardly any notable play in single and double action. The barrel locks up tightly with a tiny amount of play. We did not fire this revolver. As with all previously owned firearms a thorough cleaning may be necessary to meet your maintenance standards.

Our Assessment: This revolver has a neat little story behind it. Based on the backstrap marking, this pistol was gifted to a man named A.C. Tweedy, who was one of the royal engineers of the 2nd Royal Cheshire Militia. The regiment was originally raised in Macclesfield on 25 July 1853 to provide additional Army strength during the Crimean War. On 1 July 1881 it was renamed 4th (Militia) Battalion, Cheshire Regiment, as part of the reorganisation of the militia made during the Childers reforms. The battalion was embodied on 22 January 1900 for service during the Second Boer War in South Africa. Issued to the Lieutenant in March of 1901, it is possible that this revolver saw some use in battle during the war. This revolver would make a terrific addition to any Webley collection. Please see our photos and good luck!