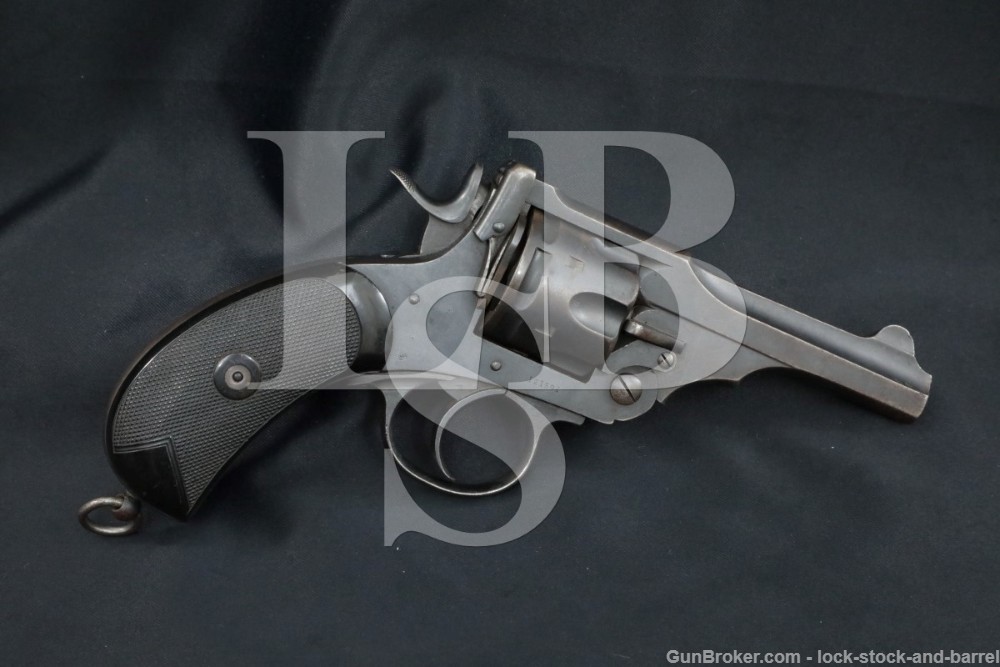 Barrel Length: The barrel is round on the bottom with flat sides and a full-length top rib. It is 4” in length.

Sights / Optics: The front sight is a half-round blade fixed to a raised base on the barrel. The rear sight is a square notch at the bottom of a “V” in the top of the barrel latch.

Stock Configuration & Condition: The grips are black checkered synthetic panels on a bird head frame. The grips have scattered nicks and scratches on the smooth portions. The checkering is well defined with a few minor interruptions. There are no chips or cracks. Overall, the grips are in about Good-Very Good condition.

Bore Condition: The bore is dim and the rifling is visible. There is scattered erosion and pitting in the bore.

Overall Condition: This handgun retains about 75% of its metal finish. There is thinning at all leading edges. There is scattered erosion with the most notable on the cylinder and the bottom of the barrel at the muzzle. There are little nicks and scratches throughout. The screw heads range from sharp to tool marked with strong slots. The markings are clear. Overall, this revolver is in about Very Good condition.

Mechanics: The action functions correctly. The cylinder lock up produces some play as does the barrel lock-up. We did not fire this revolver. As with all used firearms, a thorough cleaning may be necessary to meet your maintenance standards.

Our Assessment: The South African Constabulary (SAC) was a paramilitary force set up in 1900 under British Army control to police areas captured from the two independent Boer republics of Transvaal and Orange Free State during the Second Boer War. Its first Inspector-General was Major-General Robert Baden-Powell, later the founder of the worldwide Scout Movement. After hostilities ended in 1902, the two countries became British colonies and the force was disbanded in 1908. The Webley MK IV .450/ .455 revolver was approved for British military service on 5th October 1899. These weapons were supplied in such large quantities to British troops engaged in the South African wars during 1899 – 1902 , it was often referred to as the ‘Boer War Model’ (see page 201 of Webley Revolvers by Reinhart). This revolver retains about 75% of its finish. Please see our photos and good luck!