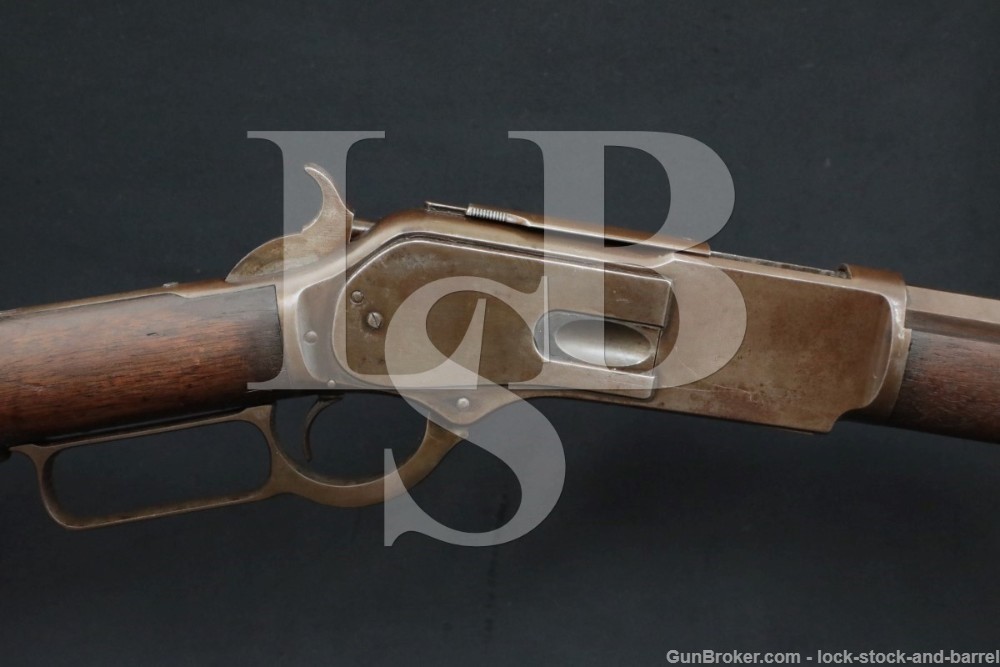 Sights / Optics: The front sight is a blade in a slotted base dovetailed to the front of the barrel. The rear of the blade appears to have broken off. The base is not tight in the dovetail, it can be pushed side-to-side by hand. The rear sight is a folding “U”-notch elevator sight which has a patent number on it which was granted to Savage Arms Corp. in 1937. The top tang is drilled, tapped and filled for a tang sight (none present).

Stock Configuration & Condition: The stocks are two-piece smooth walnut with a straight grip, steel nosecap and steel crescent buttplate with trapdoor storage compartment. The stocks have some scattered nicks, dings, scuffs and scratches. The wood has been lightly sanded and has some scattered discoloration from age and oil. There are no chips or cracks. The LOP measures 13” from the front of the trigger to the back of the buttplate. The buttplate has gone to a light-moderate patina with wear and some light erosion at the heel and toe. The stocks are in about Very Good overall condition as refinished Antique.

Finish Originality: Some of the remaining blue may be original, most surfaces show treatment with cold blue.

Bore Condition: The bore is gray with well defined rifling. There is light erosion scattered through the bore with some light pitting.

Overall Condition: This rifle retains about 7% of its metal finish. Finish remains in protected areas only, such as the bottom of the barrel, the top of the magazine tube and around the edges of the sideplates. Other surfaces have mostly worn to white or gone to a light patina. There is some scattered light surface erosion and some light nicks and scratches. The action shows operational wear The screw heads range from sharp to tool marked with serviceable slots. The markings range from clear to worn, but legible. Overall, this rifle rates in about Good-Very Good condition as Antique.

Mechanics: The lever safety’s spring is weak, and it does not properly engage. Otherwise, the action functions correctly. We have not fired this rifle. As with all used firearms, a thorough cleaning may be necessary to meet your maintenance standards.

Our Assessment: The Winchester Model 1876 was a heavier-framed rifle than the Model 1873, and was the first to be chambered for full-powered centerfire rifle cartridges, as opposed to rimfire cartridges or handgun-sized centerfire rounds. While similar in design to the 1873, the 1876 was actually based on the prototype 1868 lever-action rifle that was never commercially produced by Winchester. It was introduced to celebrate the American Centennial, and earned a reputation as a durable and powerful hunting rifle that was also used by the Canadian North-West Mounted Police and the Texas Rangers. Theodore Roosevelt used one on his early hunting expeditions in the West and one was found in the possession of Apache warrior Geronimo after his surrender in 1882. Unfortunately, the 1876 lost popularity when the Model 1886 was introduced in heavier calibers. This rifle is chambered in .45-60 Win., a cartridge designed for the short action Model 1876 rifle, a shortened version of the .45-70 Govt. This is a Model 1876 rifle that is in about Good-Very Good condition with the surfaces appearing to have been treated with cold blue in the distant past. The bore is gray with well defined rifling, light erosion scattered throughout and some light pitting. The lever safety’s spring is weak, but otherwise the rifle is functioning properly. The 1876 Winchester was only made for 21 years, with a total of about 63,871 made in rifle, carbine and musket formats, with the result that ALL are collectable. This would be a great rifle to add to a collection, placed between an 1873 and an 1886. Please see our photos and good luck!