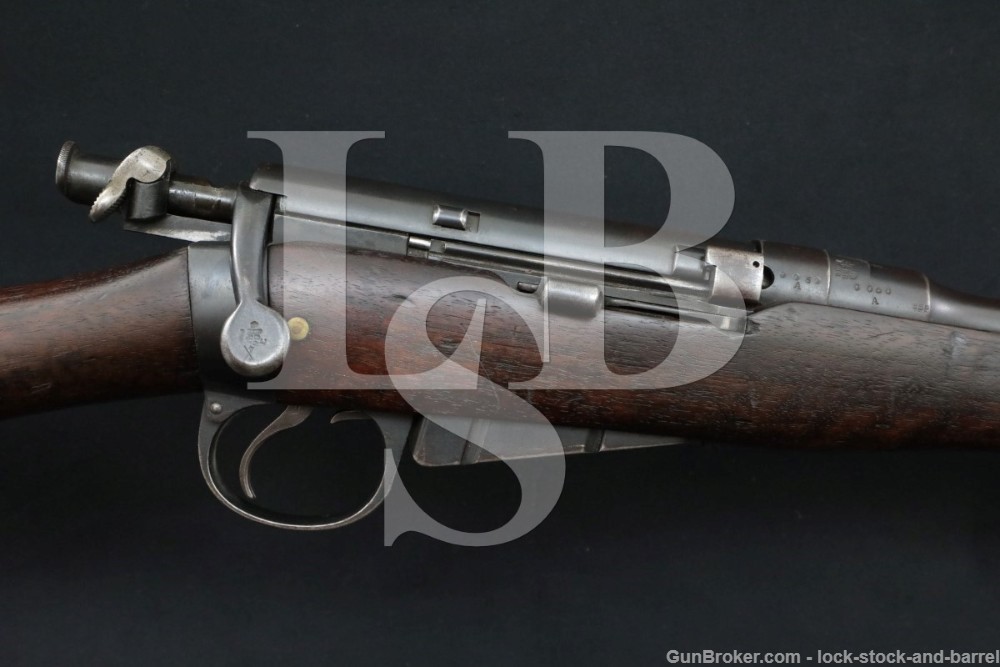 Markings: There is no visible import mark. The left side of the stock collar is marked “crown / V.R. (Victoria Regina) / ENFIELD / 1900 / L.E.C. / I.”. The right side of the receiver and barrel shank are each marked with the serial number, with “touching arrowheads” (out of service mark), with “crossed flags’” proofs, “crowned” inspection stamps, and with “crown / BNP” proofs. The left side of the barrel shank is marked with a British export mark (applied by Britain not an importer). It reads “.303 2.222 / 18.5 TONS PER square inch” (the rifle fires a .303 projectile, the case max overall length was 2.222 inches and it was pressure tested to 18.5 to tons). The knox form (top of the barrel shank) is marked with an “E” indicating the barrel has deeper Enfield rifling. The rear of the bolt handle and bottom of the rear sight ladder are marked with the serial number. The right side of the butt is marked “I.*” and with a circular cartouche containing “R crown M / ENFIELD”. The bottom of the grip and top of the buttplate are each marked with inspection stamps. The brass marking disk on the butt is marked with “crossed out numbers” and “3.  ’05 / R.I.C. / 9960”. This marking indicates that the rifle was converted by the Royal Irish Constabulary in 1905. There are other several small stamps on the rifle including “crowned” inspection stamps & proofs.

Sights / Optics: The front sight is a small inverted “V” post set atop a small ramped base. The rear sight is a “V” notched blade attached to an escalator assembly. The left side of the sight base is marked “200 300 400 500” for use with the escalator. It flips up to become a sight ladder that uses a sliding “V” notched blade. The ladder is marked from “6-20”.

Stock Configuration & Condition: The wood stock has a straight grip with finger groove, nose cap with bayonet lug, two sling loops, marking disk on the right side of the butt, and a brass buttplate with a hinged door for storage. The buttplate shows several scratches, small dents, and surface erosion. The nosecap shows scrapes & discoloration from oxidation. The bottom of the forearm shows a repair. The wood shows numerous  scrapes, scratches, and compression marks. Several have damaged small portions of the surface wood. Most of these marks have been oiled over. The LOP measures 13  inches from the front of the trigger to the back of the buttplate. The stock rates in about Very Good overall condition as a refurbished antique.

Bore Condition: The muzzle and grooves are grey. The rifling is deep. There is fouling and intermittent erosion in the grooves & near the muzzle.

Overall Condition: This rifle retains about 40% of its metal finish. The dust cover has been treated with cold blue. The metal shows scrapes, scratches, discoloration from oxidation, and thinning on the leading edges of the metal. The left side of the receiver shows thinning from the dust cover cycling with the bolt. The screw heads show use and oxidation. The markings are deep. Overall, this rifle rates in about Very Good condition as an antique.

Box, Paperwork & Accessories: The rifle comes with a 6 round magazine and a dust cover that have each been treated with cold blue. A few scratches and small areas of surface erosion show through the cold blue on the magazine. The magazine shows some scrapes and discoloration. The magazine is in about Very Good condition. The dust cover has oxidation showing through the cold blue finish. It shows scratches and discoloration. It is in about Very Good condition.

Our Assessment: This Rare Lee Enfield Mk I RIC Carbine started life in 1900 as a Lee Enfield Mk I Carbine (LEC I). In 1905 it was updated by the Royal Irish Constabulary (RIC). The RIC update required a collar to be added at the muzzle to increase the barrel diameter to accept a Pattern 1888 bayonet ring. Only LEC I and LEC I* carbines were updated. About 11,000 carbines were updated by the RIC.
This Carbine has great markings including a rarely seen “L.E.C. / I.” marking on the stock collar. The rifle comes with its standard short magazine and a dust cover. This is a great find for the Enfield collector.
For more info see pages 208-209 of Phillip Peterson’s Standard Catalog of Military Firearms 4th Edition.