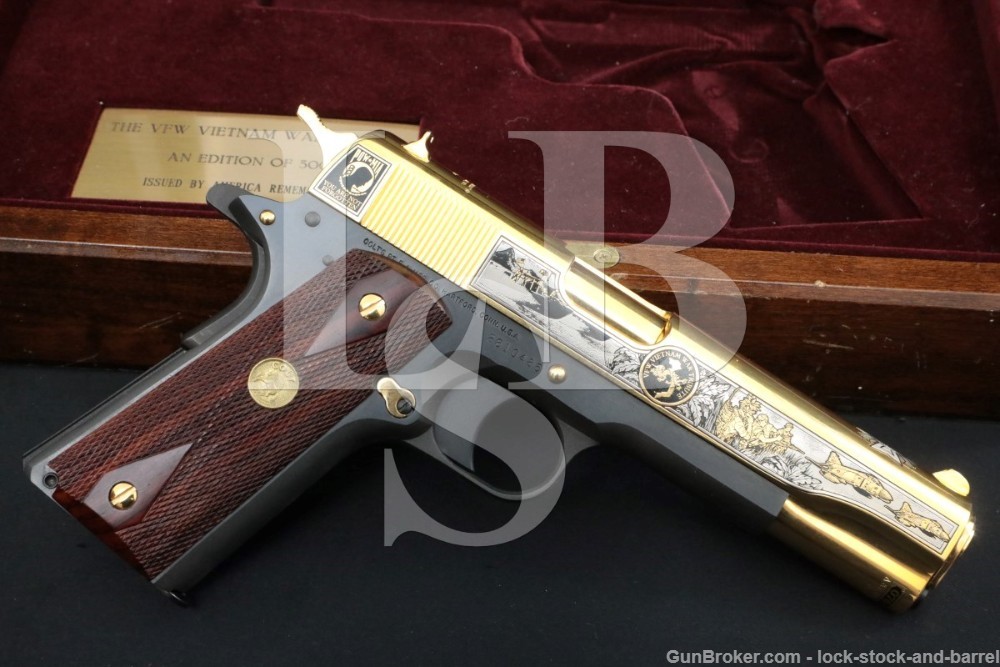 Markings: The left side of the slide has a Vietnam war scene in gold, silver and black surrounding a circle marked “VFW VIETNAM WAR TRIBUTE” over an outline of Vietnam superimposed over a dragon. Behind the slide serrations on each side is a POW-MIA logo over “YOU ARE NOT / FORGOTTEN”. The right of the slide has a different war scene around the same circle. The top of the slide has a VFW emblem and “WE’D DO ANYTHING FOR THIS COUNTRY” in front of the ejection port and “”AMERICA REMEMBERS” / AHL ASHLAND, VA / .45 AUTO” in front of the rear sight. The chin of the slide is marked “070 OF 300 / A&A ENGRAVING Inc. / Rapid City, S.D.”. The right of the frame is marked “COLT’S PT. F.A. MFG. CO. HARTFORD, CONN. U.S.A. / 2810486”.

Stock Configuration & Condition: The grips are checkered walnut with gold-colored Colt medallions and smooth diamonds around the grip screws. The grips have no notable wear or damage, only light handling marks. There are no chips or cracks. Overall, the grips are in Excellent condition.

Overall Condition: This pistol retains about 99% of its metal finish. There is no notable wear or damage, only light handling marks. The screw heads are sharp. The markings are clear. Overall, this gun is in Excellent condition.

Mechanics: The action functions correctly. The slide has very light play to the frame. We did not fire this pistol. As with all used firearms a thorough cleaning may be necessary to meet your maintenance standards.

– One 7-round Colt magazine.

Our Assessment: Made in 2003 as a limited edition of 300 pistols to pay tribute to those who served in the Vietnam War, this Colt Government Model 1911 was commissioned by America Remembers. Here is what they have to say about the pistol:

“Our involvement in Vietnam spanned three decades, from the 50’s to the 70’s and it is estimated that more than 2,500,000 Americans served in Vietnam.  Just as their parents and family members had in previous wars, the young American warriors who served in Vietnam put their lives on the line in support of freedom and liberty, and served with courage and valor under very difficult conditions.  Their sacrifices were great and in the course of nearly two decades of conflict, some 58,000 Americans lost their lives in Vietnam, and another 365,000 were wounded.

In this spirit, it is fitting that we pay tribute to those who served in America’s longest war, particularly in light of recent events, both on American soil and far from home.  Threats to America have strengthened our resolve to preserve our liberty and to appreciate those who have put their lives on the line to defend our way of life.  The spirit of patriotism is running strong in America these days.  As a nation, we are finding many ways to honor those who have served in our armed forces, bravely upholding the principles upon which our great nation was founded.”

We couldn’t have said it better ourselves. This pistol will make a wonderful addition to any veteran’s collection as well as a fine gift. Please see our photos and good luck!