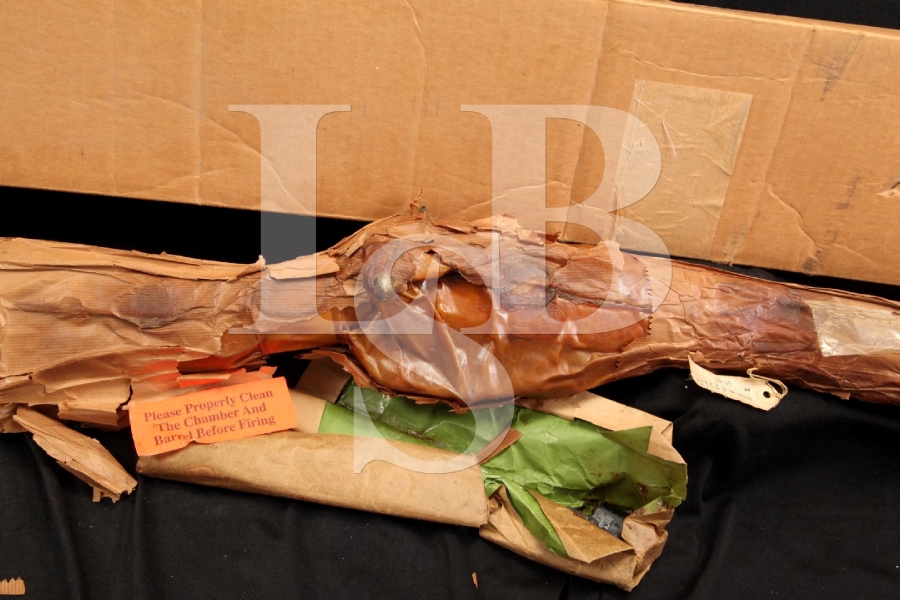 SOLD FOR:$1,671.00
Make: Royal Ordnance Factory Fazakerley, England
Model: No4 Mk2
Serial Number: A2252
Year of Manufacture: 1955
Caliber: .303 British
Action Type: Bolt Action, Detachable Magazine
Markings: The rifle is still wrapped in its original paper and cosmoline. We have only removed paper to view the import mark and the serial number. The import mark on the front of the barrel reads “CAI ST ALB VT”. The left side of the receiver reads “UF 55 A22522”. The tag on the center of the rifle is marked “SERIAL No. A22522 / UF 55”. The tag on the right side of the butt is marked “RIFLE No.4 Mk2 / CR. 18GA / NORMAL BUTT / FAZ AUG1955 / NEW”. The tag on the end of the butt is identical. The storage tag reads “PLEASE PROPERLY CLEAN THE CHAMBER AND BARREL BEFORE FIRING”.
Barrel Length: Not Measured
Sights / Optics: Not Viewed
Stock Configuration & Condition: Not Viewed
Type of Finish: As Military Applied
Finish Originality: Original
Bore Condition: Not Viewed
Overall Condition: The rifle comes in its original packing paper and cosmoline. The rifle appears to be in unissued condition.
Mechanics: Not Cycled
Box, Paperwork& Accessories: The bayonet and bayonet scabbard are included. They are also wrapped in paper and cosmoline. We assume they are in unissued condition. The rifle comes in a cardboard box marked “46 CARBINE”. The box has torn corners.
Our Assessment: This Enfield No4 Mk2 is in its original storage paper and cosmoline. It was made at the Fazakerley Royal Ordnance Factory in 1955. It has been kept in this condition by the owner for collector value. Many collectors prefer that these rifles be left in their storage paper and cosmoline. From its appearance, we believe the rifle to be in unissued condition. This unissued Enfield should be in pristine condition once unwrapped and cleaned.