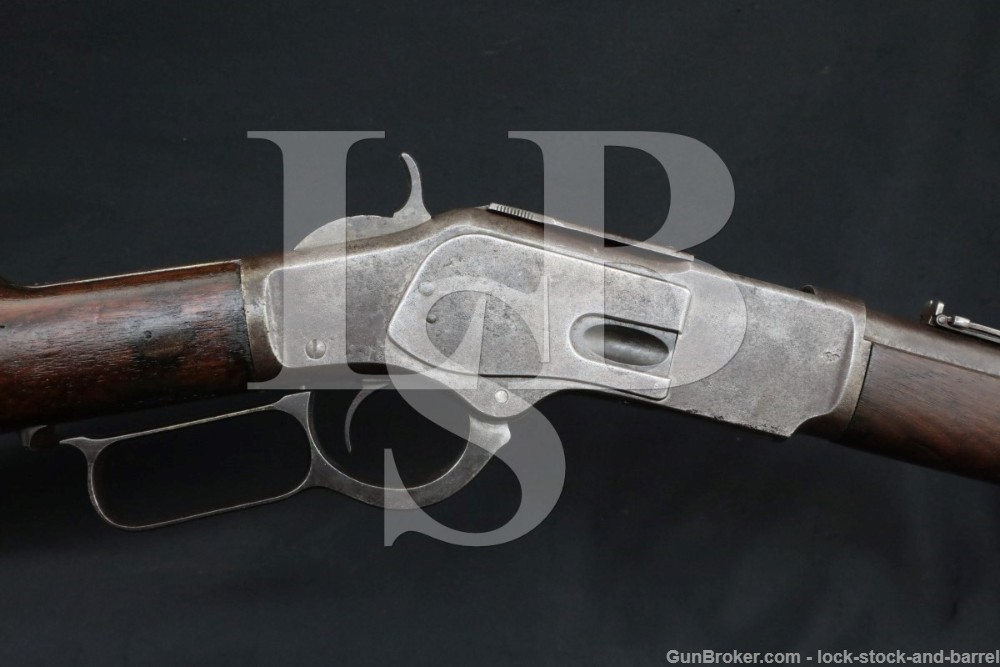 Action Type: Lever Action with Full Length Tubular Magazine. This rifle does not have a set-trigger.

Sights / Optics: The front sight is a blade integral to a base fixed to the front of the barrel behind the front band. The rear sight is a folding ladder-style sight, presenting a “V”-notch when folded down. When folded up, the ladder has a “U”-notched slider. The ladder is marked from “0” to “20” in increments of 5 with hash-marks in between.

Stock Configuration & Condition: The stocks are two-piece smooth walnut with banded forend, straight grip, straight comb and steel carbine-style buttplate with sliding-door storage compartment. The stocks have several scattered nicks, scuffs and scratches with a few more notable dings. The buttstock has cracks extending back from the top tang on each side and one extending back from the bottom tang in the belly. This appears to have cracked through the wrist, as there are fill-repairs on each side, indicating a cross-piece repair. There are a few small losses and discoloration at most edges. The LOP measures 12 7/8? from the front of the trigger to the back of the buttplate. The plate has a mottled appearance, showing treatment with cold blue, some light erosion, wear, nicks and scratches. Overall, the stocks are in about Fair-Good condition as repaired and refinished Antique.

Finish Originality: No original finish remains. There is an area around and behind the front sight which shows treatment with cold blue, most other surfaces don’t show refinishing.

Bore Condition: The bore is light gray. The rifling is generally well defined, mostly sharp where not interrupted by erosion. There is some scattered light erosion in the bore, infrequent light pitting, and three spots of more notable erosion in the top of the bore about half-way down. There is a bulge in the bore about 3″ from the muzzle. The bulge is immediately visible inside the bore, but not as noticeable on the exterior

Overall Condition: This rifle retains about 0% of its metal finish. The area around the bulge appears to have seen some buffing and then treated with cold blue in the distant past. Other surfaces show a fairly consistent light surface erosion and discoloration from oxidation. There are scattered nicks, scuffs and scratches with tool marks at most screw heads. The action shows operational wear. The screw heads are worn with unusable slots. The markings are worn, but mostly legible. Overall, this rifle is in about Fair condition as Antique.

Mechanics: There is a bulge in the bore about 3″ from the muzzle. The bulge is immediately visible inside the bore, but not as noticeable on the exterior. Otherwise, the action functions correctly. There is a dust cover on a rail on the receiver, typical of the Third Models. We have not fired this rifle. As with all used firearms, a thorough cleaning may be necessary to meet your maintenance standards.

Our Assessment: One of the most successful, and certainly one of the most famous Winchester rifles was the Winchester Model 1873, known as “The Gun that Won the West” for its predominant role in the hands of Western settlers. The Model 1873 had a steel frame that was much stronger than the brass framed Model 1866, allowing Winchester to develop a family of powerful new cartridges, with Colt usually producing Single Action Army revolvers in the same calibers shortly after they were developed. The .44-40 Win. cartridge was one of the most popular cartridges of the era, able to take game as large as deer. This example is a saddle ring carbine and looks like it has had a long and useful life. This would make a great addition to a Winchester or early cartridge rifle collection, and will display well with its “been there, done that” appearance. Please see our photos and good luck!