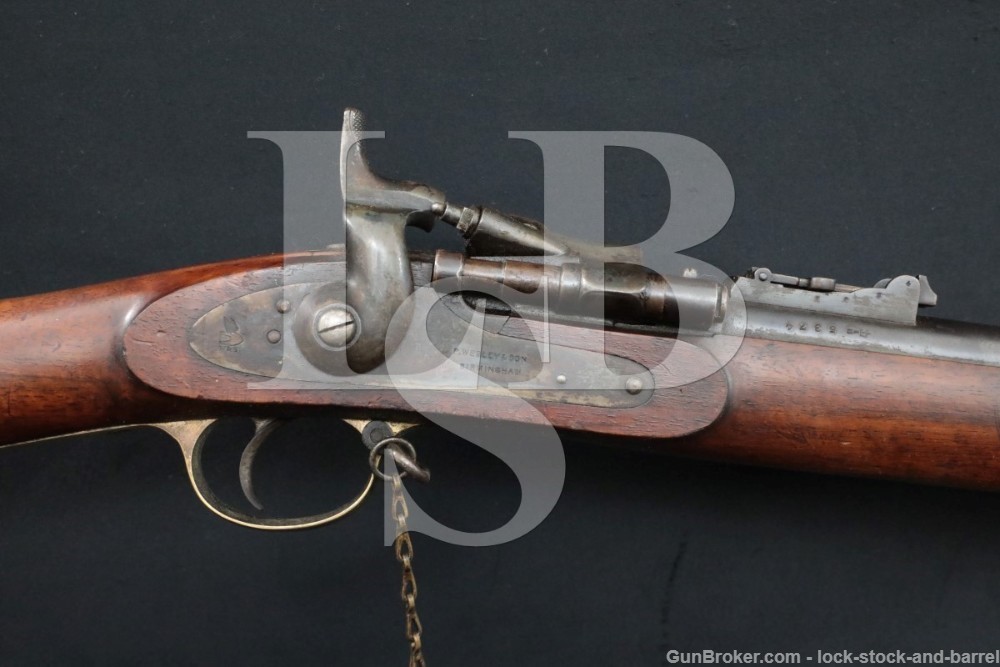 Stock Configuration and Condition: The stock is one-piece wood with nose cap, three barrel bands, straight grip, straight comb, brass buttplate, sling swivel on the front barrel band and a sling swivel in the front of the trigger guard. The stock has several scattered nicks, dings, scrapes and scratches. A kind of white spray residue can be seen on the buttstock and grip portions of the wood. There is a more notable loss on the right side of the forend. The LOP measures 14” from the front of the trigger to the back of the buttplate. The plate has scattered wear and light staining. Overall, the stock rates in Good-to-Very Good condition, as antique.

Bore Condition: The bore does retain some level of brightness, but is overall quite dirty, with well-defined rifling. There appears to be intermittent spots of light erosion along with light stubborn fouling throughout.

Overall Condition: This rifle retains about 77% of its metal finish. The barrel retains most of the remaining finish with the receiver and breech assembly having shifted to a light patina. The barrel has intermittent patches of light surface oxidation throughout. There is light thinning on the barrel tip. The screw heads range from sharp to disfigured with usable slots. The markings are clear. Overall, this rifle is in about Very Good condition, as Antique.

Box, Paperwork, and Accessories: There is a ram-rod.

Our Assessment: Originally developed by a New York-based entrepreneur for the British, the Snider breech-loading system was designed to economically convert existing muzzle-loading arms to use a breech-loaded cartridge. This allowed Britain to convert their existing inventory to use the new technology which allowed rifles to be fired faster, more reliably, and with ammunition easier to store and transport. The Snider was more of a stop-gap, being swiftly replaced by the Martini, but was a significant development in military small arms. This is indeed one of those stop gap weapons, specifically a P53 converted using the Snider patent. At the time, this upgrade gave troops an astonishing 284% increase in fire-rate. The sound of Infantry line volleys were described as “canvas ripping”. Conversion such as these are a fascinating aspect of military weapons history. This example is, for an antique, in Very Good condition with a more than decent bore and much of its original finish. Good luck and happy bidding!