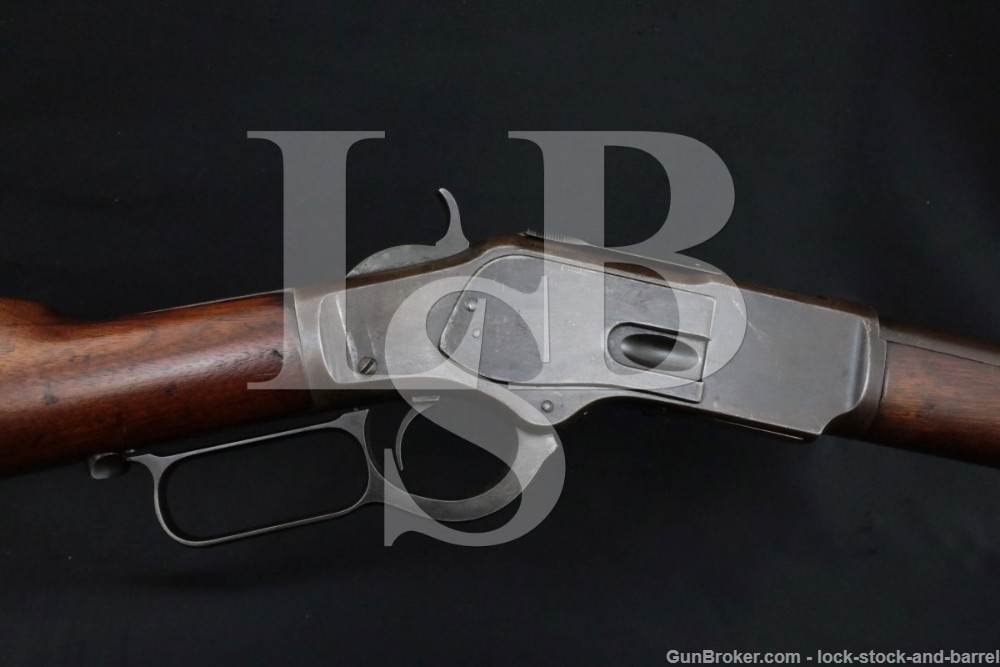 Sights / Optics: The front sight is a blade integral to a base dovetailed to the front of the barrel. We suspect that the front sight is not original to the rifle as there are punch marks in front of and behind the slot as from fitting it to the sight base. The rear sight is a flat-top “V”-notch elevator sight dovetailed to the rear of the barrel. The top tang is drilled, tapped and filled for a tang sight (none present).

Stock Configuration & Condition: The stocks are two-piece smooth walnut with capped forend, straight grip, straight comb, and steel crescent buttplate with a sliding brass door covering a storage compartment in the butt (there is nothing in the storage compartment). The stocks have some scattered nicks, scuffs and scratches, many have been finished over. There are two filled holes in the belly. There is a crack in the right of the stock below the front of the comb which goes into the right of the wrist but does not appear to reach any edges. There is a patch-repair at the heel in front of the buttplate’s tang. There are two lines on the left of the buttstock at the rear. They do not catch a fingernail and appear to be either scratches which were finished over or well-repaired cracks. The LOP measures 12 3/4? from the front of the trigger to the back of the buttplate. The plate shows old treatment with cold blue, having a mottled appearance and scattered wear, most notable at the heel and toe. Overall, the stocks are in Good-plus condition as repaired and refinished Antique.

Finish Originality: Some remaining finish may be original, most surfaces show treatment with cold blue.

Bore Condition: The bore is gray and the rifling is well defined. There is scattered light erosion and pitting in the bore.

Overall Condition: This rifle retains about 10% of its metal finish. Remaining finish is infrequent and fairly evenly scattered throughout. Other surfaces have a mottled appearance of worn areas showing treatment with cold blue and some areas going to a light patina. There are scattered nicks, scratches and scuffs with swirling on the receiver flats and sideplates, consistent with aggressive cleaning. There are tool marks around several screw heads. The screw heads are usable though worn. The markings are clear. Overall, this rifle rates in about Very Good condition as Antique.

The .44-40 Win. cartridge, also known as the .44 WCF, was Winchester’s flagship center-fire cartridge and became a popular round in its day, also being chambered in Colt’s Single Action Army revolver.

This Model 1873 Rifle was made in 1888 and looks like it served generations well and survived through them in good shape. It will be interesting to collectors both for its special-order half-length, or “button”, magazine and its British proof markings.