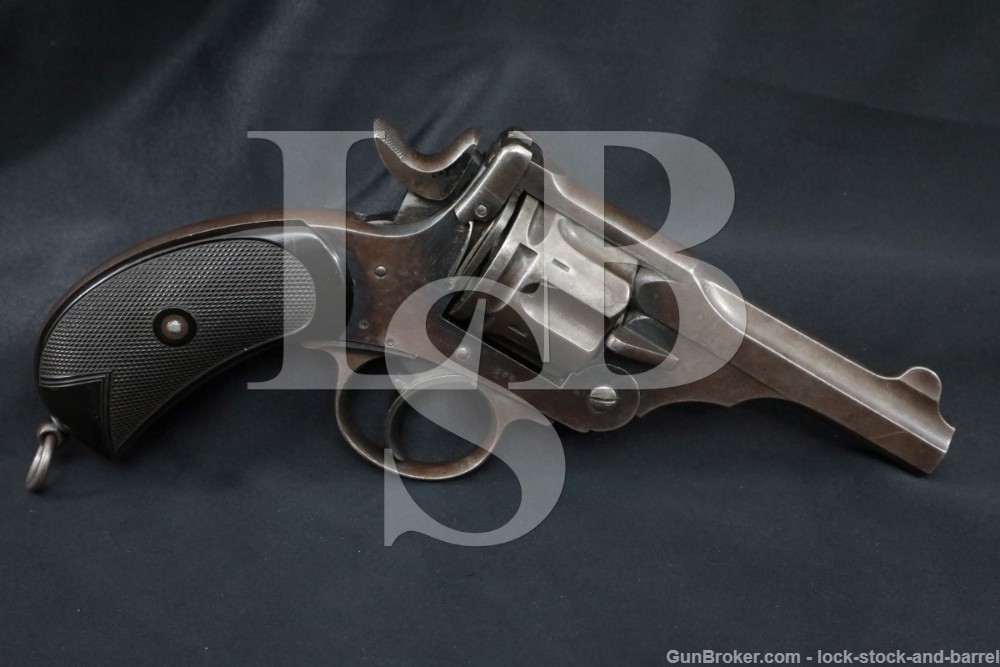 Markings: The left side of the top strap is marked with “MARK “III” 455“. The right side of the frame below the cylinder is marked “556”, the left has Webley’s flying bullet logo and “WEBLEY / PATENTS”. The cylinder is marked behind each flute with British proof marks. The left of the frame under the grip is marked “V / 12773” and “B”. The rear face of the cylinder and the front face of the barrel assembly are marked “556”. The top of the rib is marked “P. WEBLEY & SON LONDON&BIRMINGHAM”. There is a British proof at the rear of the rib on either side.

Stock Configuration & Condition: The grips are checkered black hard rubber with smooth borders. The grips have light-moderate handling wear with a few nicks, scuffs and scratches on the borders. The checkering is generally sharp with few interruptions and some faint discoloration. Overall, the grips are in Fair-Good condition.

Bore Condition: The bore is somewhat bright with well defined rifling. There is some scattered pitting through the bore.

Overall Condition: This handgun retains about 30% of its metal finish. There is remaining blue in protected areas, otherwise that majority of the metal surfaces have turned to a mottled patina. There are some scattered light nicks, scuffs and scratches. There is thinning at all leading edges. The screw heads range from tool marked to disfigured with serviceable slots. The markings are generally clear, some are worn, but legible. Overall, this revolver is in about Fair-Good condition as refinished.

Mechanics: The action functions correctly. The barrel locks up with no play to the frame. The cylinder locks with barely perceptible play when the trigger is depressed. The double action is smooth. We did not fire this handgun. As with all used firearms, a thorough cleaning may be necessary to meet your maintenance standards.

Our Assessment: From BBCFM, “The Mark III was introduced in October 1897 and approved for Government service on 27th November 1897. The most obvious visible difference from the previous models of the service revolver was the change to the way the cylinder was retained using a crossbar under the holster guide which engaged on a collar on the cylinder, effectively doubling the area of contact. A similar system was used on the 1891 Webley Government and in a revised form on later WG models. The cylinder arbour was now attached to the frame with a spiral groove cut into it to reduce fouling.” This revolver rates in about Fair-Good condition, retaining about 30% of its metal finish. Please see our photos and good luck!