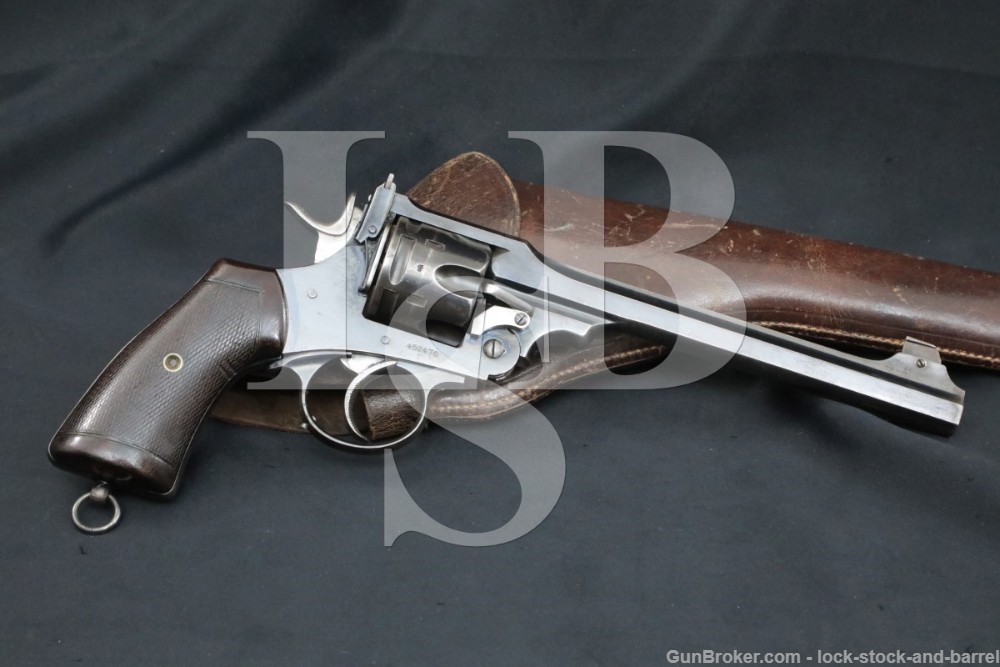 Sights / Optics: The front sight is a beaded blade slotted and set screwed to a raise in the rib. The rear sight is a U-notch leaf fixed to the top of the latch.

Stock Configuration & Condition: The grips are two-piece checkered walnut panels. The panels appeared to have been refinished at some point. There are some scattered nicks and compressions on the smooth borders. The left and right panels have two notable compressions on the checkering. Otherwise, the checkering shows wear but is defined. There are no chips or cracks. Overall, The grips rate in about Good-Plus condition.

Overall Condition: This handgun retains about 79% of its metal finish. There are several scattered nicks and scratches throughout. There is thinning all leading edges and notably on the bottom of the barrel and barrel assembly. The thinning is consistent with holster wear. The cylinder shows a distinct turnline. The screw heads are lightly tool marked. The markings are legible. Overall, this handgun rates in about Very Good condition.

Mechanics: The action functions correctly. The cylinder locks up with some play. We did not fire this handgun. As with all used firearms, a thorough cleaning may be necessary to meet your maintenance requirements.

Our Assessment: “After the year 1902, Webley & Scott launched another caliber .455 model as an alternative to the current W.G. and Mark IV revolvers. The initials W.S. may be interpreted as representing Webley Service, as the weapon was certainly an improved version of the official service revolver. Furthermore, the serial numbering of W.S. models occurred within the same range as those allotted to the Mark IV and subsequent service patterns. The W.S. Target model featured a 7.5” barrel and had checkered walnut stock plates. The majority of Target models also have a deep horizontal groove machined along each side of the barrel lug. The W.S. revolver continued to be advertised in Webley & Scott catalogues until the second World War, when all production ceased and was never resumed.” This revolver is in about Very Good condition with solid bore. Please see our photos and good luck!