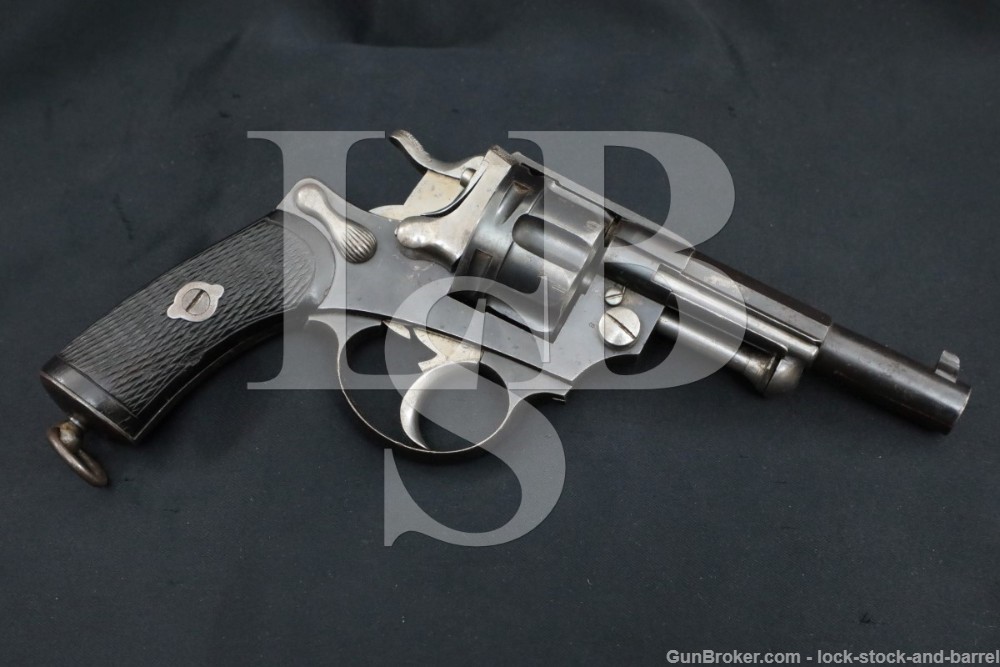 Sights/Optics: The front sight is a tall blade fixed to an arched base which is fixed to the barrel. The sight appears as a slightly oblong bead when viewed from the rear. The rear sight is a “V” groove at the rear of the top strap.

Stock Configuration and Condition: The grips are checkered ebony. The left grip is held in place by the left side plate and the right grip with a grip screw. The smooth areas have light nicks and compressions. Both panels have a few spots where the checkering is worn down. The checkering is well-defined. There are no chips or cracks. Overall, the grips rate in Very Good-to-Fine condition, as antique.

Type of Finish: Strawed and White

Bore Condition: The bore is semi bright and the rifling is well defined. There is no erosion in the bore, but there is some minor stubborn fouling in the lands.

Overall Condition: This revolver retains 0% of its strawed finish. Surfaces originally left white have either gone to a light patina or have light surface oxidation. Strawed surfaces have gone to white. There are minor nicks and scuffs scattered throughout the revolver. Screws have light tool marks with strong slots and pins are unmarred. Overall, this revolver rates in Good-to-Very Good condition, as antique.

Mechanics: The action functions correctly. We did not fire this handgun. As with all used firearms, thorough cleaning may be necessary to meet your maintenance standards.

Our Assessment: The Chamelot & Delvigne Model 1873 and 1874 revolvers were adopted by the French army as service revolvers for their non-commissioned (1873) and commissioned (1874) officers. The 1873 and 1874 pistols are very nearly identical, but the M1874 was blued vs. “In the White”, had a slightly shorter barrel and the cylinder was fluted. The French models were made by Manufacture d’armes de Saint-Étienne (MAS) but the revolvers were so popular, they soon began to be copied by German and Belgian gun makers, and versions were adopted by the Belgian, Dutch, Italian and Swiss armies. This revolver is a Belgian copy of the Model 1874 pistol that was made prior to 1893 as evidenced by the lack of a crown on the Liege proof on the cylinder. It is in Good-to-Very Good overall condition (as Antique) with 0% of its original finish remaining. This is a nice find for collectors of French and Belgian revolvers of the late 19th Century. Good luck and happy bidding!