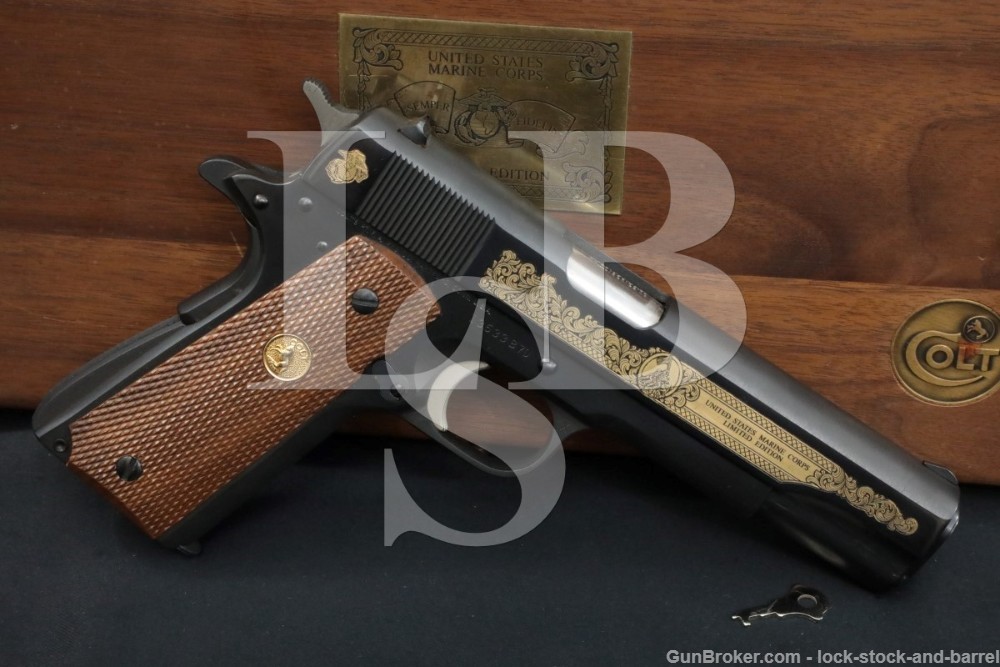 Stock Configuration & Condition: The grips are checkered walnut with gold-colored Colt medallions. The grips have no notable wear or damage, only light handling marks. The checkering is sharp. There are no chips or cracks. Overall, the grips are in Excellent condition.

Overall Condition: This pistol retains about 97% of its metal finish. There is some loss to the gold finish at the rear of the left slide panel. The action shows light operational wear. Otherwise, there are only light handling marks. The screw heads are sharp. The markings are clear. Overall, this gun rates in Fine condition.

Mechanics: The action functions correctly. The slide has very light play to the frame. The trigger is crisp. We did not fire this pistol. As with all used firearms a thorough cleaning may be necessary to meet your maintenance standards.

Our Assessment: Made in 1979 as a limited edition to commemorate the United States Marine Corps, this Colt Government Model 1911 is a worthy tribute to Marines, who have been serving America since before the end of the American Revolution. The 1911 served the Marines as the standard issue sidearm for nearly a century with some variants still in use today. This example is decorated with the Iwo Jima flag raising scene as well as the Eagle, Globe & Anchor emblem of the Corps. It will make a wonderful addition to any Devil Dog’s collection as well as a fine gift for the Jarhead in your life, and with the auction closing at the end of October, it should arrive in time for their birthday! Please see our photos and good luck!