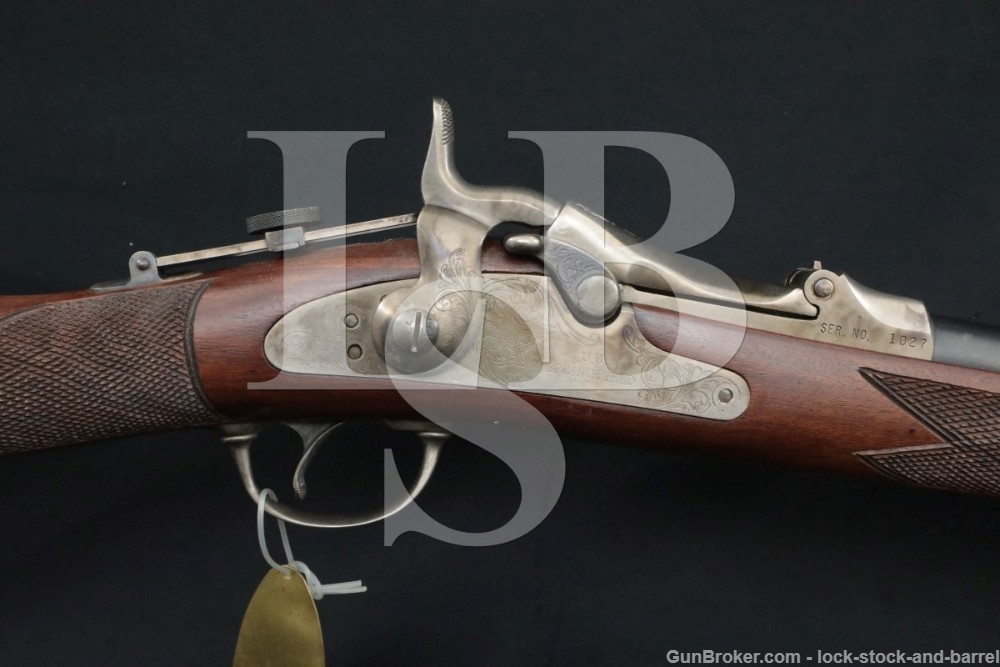 Sights/Optics: The front sight is a brass beaded post fixed to a flip-up protective hood that is notched into a base that is dovetailed into the barrel. A Model 1879 rear sight has been installed—this rifle did not feature this originally. It is a U-notch that is adjustable from 100 to 500 yards, denoted on the left side of the sight as “1-5”. When flipped up, the slider has a u-notch that is adjustable from 600-1,200 yards denoted on the face as “6-12”. The standard rear sight is a flip up tang mounted adjustable peep-sight.

Stock Configuration and Condition: The stock is a one-piece select hand-checkered walnut with forend cap, straight grip, straight comb and a steel buttplate. The forend is held with a steel barrel band. The underside of the nose cap and the front part of the forend are grooved for the included wood cleaning rod. The majority of the wear is relegated to the buttstock which has light-to-moderate nicks and scuffs on either side. There are scattered light nicks on either side of the forend. The LOP measures 13” from the front of the trigger to the back of the buttplate. The plate has a spot of moderate surface oxidation and a few minor nicks. Overall, the stock rates in Very Good condition.

Bore Condition: The bore is quite bright with sharp rifling. There is no erosion, but there is a bit of minor stubborn fouling in the grooves.

Overall Condition: This rifle retains about 92% of its metal finish. The case color has faded somewhat but the swirl is still visible. The barrel has a few light nicks along the top. The screw heads are lightly tool marked with strong slots. Overall, this rifle rates in Fine condition.

Our Assessment: The Model 1873 “Trapdoor” Springfield was the first standard-issue breech-loading rifle adopted by the United States Army and was one of the main service rifles of the U.S. Military until it was gradually replaced by the Springfield Model 1892 bolt-action rifle. This reproduction hails from 1971 and celebrates the 100th Anniversary of this storied American firearm, and is so named. It reproduces specifically the officer’s model and is more ornate than your average Trapdoor. A reproduction such as this allows us to see these rifles as they likely appeared when they were new, which is a rare sight; most Trapdoor rifles have some measure of wear, most of it heavy. There were relatively few of these made, and the low serial number is a boon. So do not miss out on a chance to own a classic, fascinating rifle! Good luck and happy bidding!