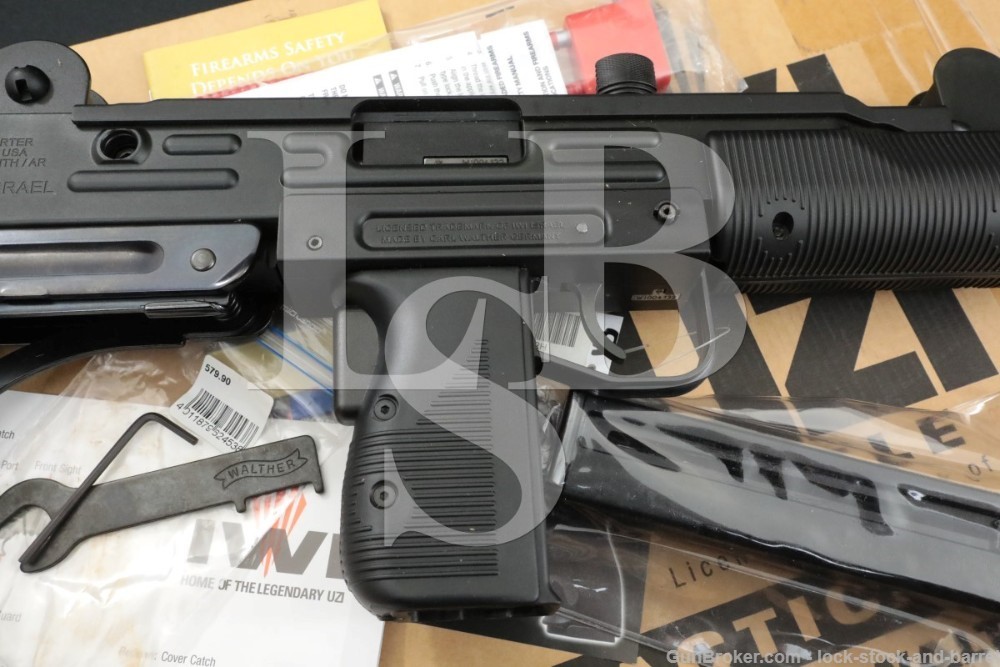 Stock Configuration & Condition/ Grip: The stocks are three pieces featuring a pistol grip integral to the frame, textured forend grip and a black metal folding butt-stock. The left side of the frame has a sling swivel and the left side of the folding stock has a sling bar (no sling is included). The stocks have some minor handling marks but they lack any notable defects. Overall, the stocks are in Excellent condition.

Overall Condition: The rifle retains about 99% of its metal finish. There are some handling marks but the rifle lacks any notable defects. The markings remain clear. The screwheads remain serviceable. Overall, the rifle is in Excellent condition.

Box Paperwork and Accessories: The rifle comes with its serial matched box, user manual, a single 10-round magazine for .22 LR rounds, and a padlock. The case has only minor handling wear and remains in Fine condition. The magazine is still wrapped and has standard markings. The magazine remains in Excellent condition.

Our Assessment: This Walther Uzi is a semi-automatic rifle that fires .22 LR rounds. The Uzi was the brainchild of Israeli IDF officer Uziel “Uzi” Gal who invented the gun in 1948. Gal did not want his brainchild to be named after him but the Israeli government did so anyway.  Following his military career, Gal would remain a firearm designer for the remainder of his life, eventually settling in the US. The Uzi entered service in the IDF beginning in the 1950s and in the 1960s it began to be exported around the world. It was the most widely proliferated submachine gun by the 1980s. This Uzi was manufactured by Walther under license from Israel Weapon Industries (IWI) to meet civilian market regulations, and it can now be yours. This is a gun you do not want to miss out on!