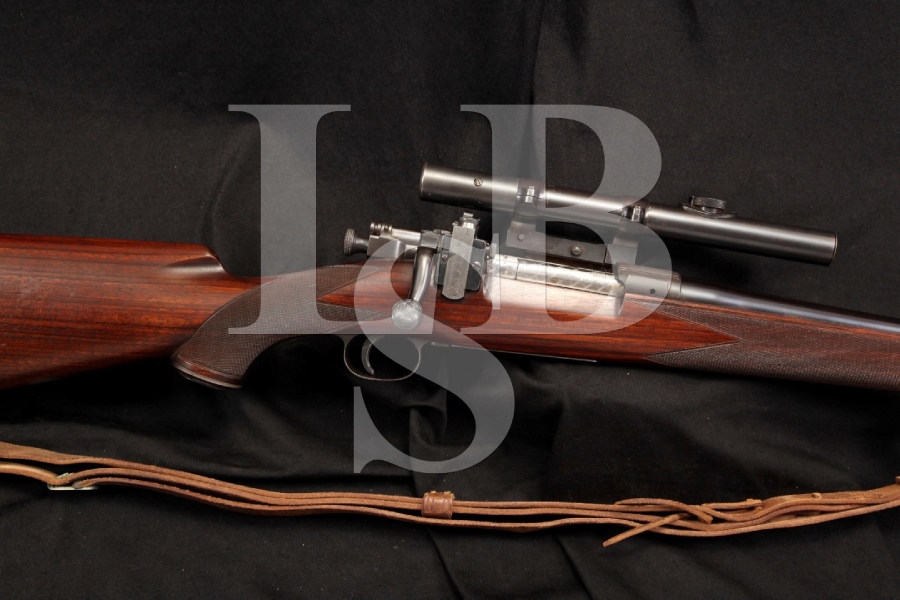 Sights / Optics: The front sight is a hooded bead atop a long ramped finely pebbled base attached to the barrel with a barrel band. The hood is machined, not stamped, and knurled for the front 5/16” of its body. The rear sight is a vintage Lyman #48 side mount receiver sight mounted to the right side of the receiver. It is adjustable for windage and elevation and the scale on the right side is marked from “0” to “125”. The large aperture is for close or moving targets and has a flip-up aperture with a small hole when fine accuracy is required. The knurling on the adjustment knobs is sharp. The receiver also has a scope mounted on a Griffin & Howe single lever quick release base on the left side. The scope is marked “Carl Zeiss / JENA” in a banner on the top, “GERMANY” on the left side and has a 0.870” tube diameter. The scope has a German reticle with a fine horizontal line that goes all the way across the scope. The scope lenses are clear and without distortion. The body of the scope shows thinning at the edges of the objective and eyepiece and a few light handling marks, including a mark through the finish near the eyepiece and marks from where the rings were previously located. The knurling on the adjustment ring is sharp. The checkering on the release lever shows light wear and tiny marks in the finish. The mount shows light handling marks and the large screw on the left side is disfigured. Overall, the scope and its mount are in about Fine condition.

Stock Configuration & Condition: The stock is one piece checkered dark walnut with a satin finish. The stock has a raised cheekpiece and a pistol grip with a blued steel grip cap secured with an engraved screw. There are sling swivel studs mounted at the butt and on the forend. There is a red rubber recoil pad mounted to the butt with a black spacer. The forend has a black tip. The stock shows a few light compression marks along the comb, a compression mark on the left side by the rear sling swivel and two compression marks in the cheekpiece. There are two compression marks on the left side of the forend along with several other handling marks. The cut checkering is sharp, but there are tiny mars in the pistol grip checkering and two large mars on the underside of the forend checkering. The LOP measures 13 ¾” from the front of the trigger to the back of the recoil pad, which is deformed and in Poor condition. The stock rates in about Fine condition not considering the recoil pad.

Type of Finish: The rifle is blued with a jeweled bolt. The top of the chamber ring is finely pebbled and the front of the magazine floorplate is checkered.

Bore Condition: The bore is bright at the breech tending to gray at the muzzle. The rifling shows slight wear. There is no erosion. Our bore gauge measures a ME of 0.5.

Overall Condition: This rifle retains about 97% of its metal finish. The barrel shows a few light handling marks and a few isolated spots of surface frosting. The right side of the receiver shows frosting. The serrations on the cocker and the knurling on the bolt knob are sharp, but there are one or two tips in the checking of the bolt knob that show surface loss. There is a mark on the front of the trigger guard and the magazine floorplate shows thinning and light frosting. The screw heads are sharp. The markings are clear. Overall, this rifle rates in about Fine condition.

Box, Paperwork & Accessories: This rifle comes with the attached scope, scope mount and receiver sight. Also included is vintage one piece brown leather carrying sling. The sling has an aluminum double-hook and two leather sliders. The leather is dry and shows scuff marks. The sling is in about Very Good condition.

Our Assessment: Griffin & Howe started the company in 1923 to produce custom sporting rifles based on Springfield actions. They later made custom rifles based on other actions. They enjoyed a reputation for making a quality product, and Gary Cooper, Ernest Hemingway, Clark Gable and Jack O’Connor were among their customers. According to the Blue Book of Gun Values, fewer than 2800 custom rifles have been made since 1923. This rifle is a custom G&H sporting rifle based on a Springfield action and chambered in 30-06 Springfield. From the G&H side mount scope mount, it was made in the late 1920s or early 1930s. Besides the early single lever quick detachable side-mount, this rifle includes a vintage Zeiss scope and a Lyman No. 48 receiver sight. The rifle is in Fine condition with just a few marks and some surface frosting in the finish. Unfortunately, the recoil pad is disfigured from sitting too long in a safe. The rifle has a nice bore. It was made at a time when American quality was at its finest, with checkering on the magazine floorplate, and fine pebbling on the receiver crown and the front sight ramp. Even the screw on the grip cap is engraved! This rifle is sure to find a spot in a collection of vintage American hunting rifles.