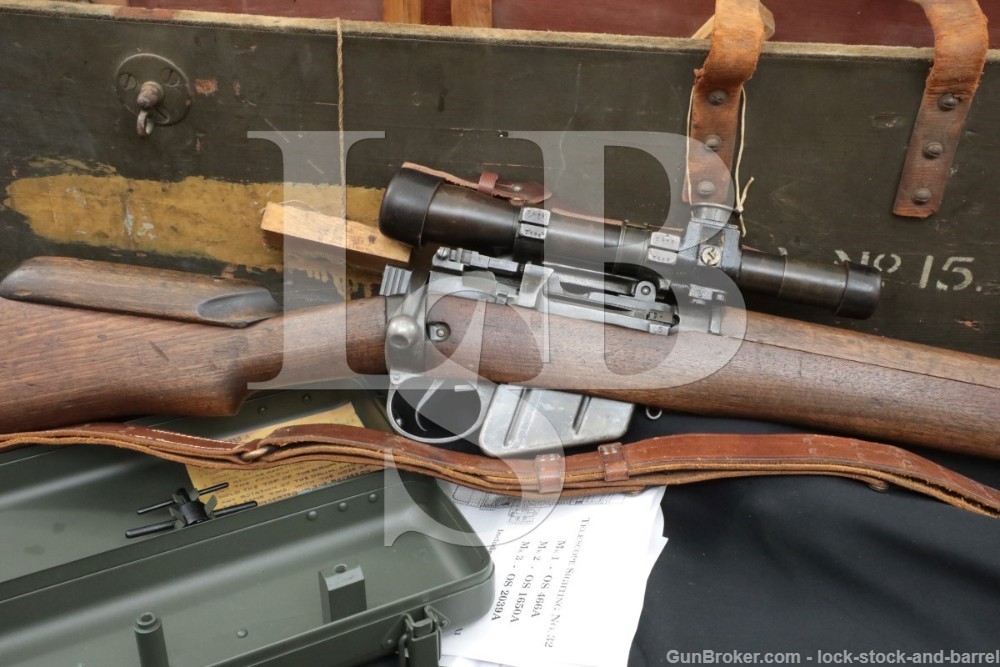 Markings: The import mark on the bottom of the barrel reads “C.A.I. GEORGIA VT. / NO.4 MK1 .303 UK”. The left side of the stock collar is marked “M47C” (the code for BSA Shirley), “1944”, with the serial number, and “TR” (the final inspection proof prior to being upgraded to a sniper by Holland & Holland). The left side of the receiver is marked “No.4 Mk.I” (faded) and “T” (signifying a No.32 telescope had been fitted, and the combination had met all inspections). The rear of the receiver is marked with 2 “crowned” inspection stamps. The rear of the bolt handle and bottom of the magazine (restamped) are marked with the serial number (no letter prefix). The bolt head is marked with “1”. The cocking piece is marked “N67 MKII”. The front of the magazine well is marked “M/47C”. The nose cap is marked “MB13” on the top and “circled WLM/260” on the bottom. The bottom of the grip is marked with faded or partial stampings. The bottom of the butt is marked “S51” which is a Holland & Holland mark. The top of the grip is marked with the scopes serial number “16946” and with “crossed out numbers” from a scope that had been previously paired to the rifle. There are a few other small markings on the rifle.
The No.32 scope is marked “TEL. STG. No 32 MK III / OS. 2039 A / AK & S No16946 / 1944 / arrow head”. The side of the scope base is marked “N92” and “F35132”. The scope base and rings are marked with matching assembly numbers, “T425 / T425” & “T426 / T426”. The refurbished metal scope case is marked “CASE, STG. TEL. / No 8 MARK.I.” and with tape listing the scopes serial number “S/N 16946”. The interior of the metal scope case has instructions attached that explain how to zero the scope with the tool that is held in the case.
The front & back of the wood chest are both marked “CHEST S.A. No.1.5. Mk.I” and “TEL SGT MKI” in white paint. They are also marked with the rifle’s serial number and other markings in ink. The tag on the end of the crate is marked “BA 10317 / EQUIPMENTS No4 T W / RIFLES MkI W/NB / QTY 1” and “T 37353 in pencil. The underside of the top door has a worn & torn equipment list attached to it. Its markings include “EQUIPMENT, RIFLE, NO.4 (SNIPING)”.

Sights / Optics: The front sight is a blade set between two protective ears. The rear flip up sight ladder normally uses a fixed aperture in the down position. The aperture was removed inorder to mount the scope. The ladder is marked from “2 – 13”.
The left side of the receiver has two threaded holes for accepting the scope base that is attached to the scope. The scope has been refurbished. Paperwork related to the refurbishment is included; see photos. The scope is a fixed 3 power with a post reticle. The glass lens view is clear but there are a few very small flecks on the reticle. The adjustment knobs turn. The scope tube shows scrapes, scratches and discoloration. The front of the tube shows light surface erosion. The small screw heads show heavy use. The mounting screws are integral to the base. The base shows scrapes, small scratches, discoloration and surface erosion. Overall the scope assembly is in about Very Good condition.

Stock Configuration & Condition: The hardwood stock has a straight grip with finger groove, raised cheek piece, 2 nose caps, 2 barrel bands, 2 sling loops and a metal buttplate with hinged door for storage. The buttplate and stock hardware show several scarpes & small scratches. The raised cheek piece is secured by two screws.  The wood shows numerous scarpes, scratches and compression marks. Several have damaged small portions of the surface wood. Most of the marks have been finished over. The LOP measures 13 ¼ inches from the front of the trigger to the back of the buttplate. The stock rates in about Very Good overall condition as refurbished.

Bore Condition: The lands are bright and the grooves are light grey. The rifling is deep; less pronounced at the muzzle. There is fouling and intermittent erosion in the grooves. The fouling should clean up some..

Overall Condition: This rifle retains about 95% of its current metal finish as refinished. The metal shows scrapes, small scratches and a few areas of discoloration. The right side of the stock collar shows oxidation. The screw heads show heavy use. Some of the receiver markings are faded. Overall, this rifle rates in about Very Good condition, as refinished.

Box, Paperwork & Accessories: The rifle comes with a refurbished No 32 scope assembly; see above. Copies of paperwork listing details of the scopes refurbishment is included in the auction as well as a photocopied scope manual. The scope comes in a refurbished metal case. The case shows scrapes & scuffs. The interior of the metal case securely holds the scope assembly which screws to the metal mounts. The refurbished case is in about Fine condition.
The rifle comes with a 10-round magazine that shows scrapes, scratches, and thinning. Overall it is in about Very Good condition. A leather sling is attached. It shows scrapes & discoloration as well as cracking at the sling loops. Overall it is in about Very Good condition.
The rifle, scope assembly and magazine are stored in a wooden carrying case. The wood case has metal hinges, metal latches, interior leather attachments and two leather straps for carrying. The wood inside the case holds the rifle in position. It uses wooden inserts to do this. The top & bottom inserts are covered in felt. The top inserts are secured by thin cords so they will not be lost. The top door and one end of the case each show a large crack and surface damage. The exterior of the case shows numerous scrapes and scratches that have removed paint and/or damaged areas of the surface wood. There are multiple marks and excess paint on the case. The leather straps show heavy surface loss, cracking, and heavy fraying. Overall the case is in about Good condition.

Our Assessment: This Enfield No.4 Mk1 T Sniper Rifle started out as an Enfield No.4 Mk1 made at BSA Shirley during WWII. It was selected for its inherent accuracy and then upgraded to sniper configuration by Holland & Holland. The rifle was eventually imported into the U.S. and is marked accordingly on the barrel. The rifle comes with a refurbished No. 32 scope that has a clear view. The rifle and scope are held in a wooded carrying case. This is a nice package that will add to your collection.