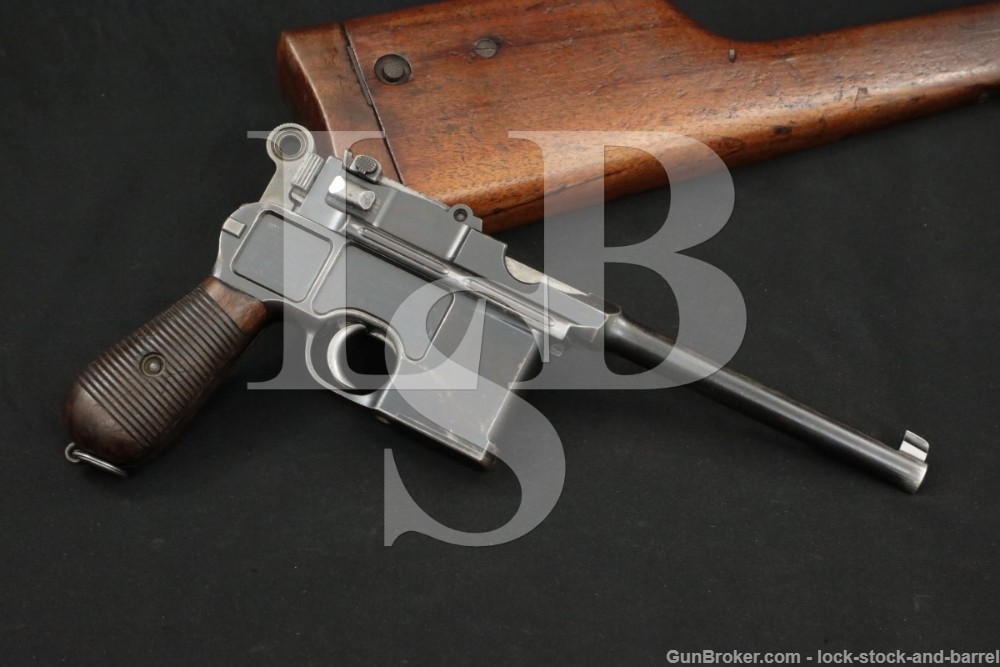 Markings: The top of the barrel extension’s chamber ring is marked “WAFFENFABRIK / MAUSER / OBERNDORF A/N”, the left shoulder is marked with the serial number “20861”, the left has a crowned “U” and “J 198” (it is unclear if this is a unit marking, inventory/rack number, or something else), the right has an Oberndorf proof mark. The bottom of the barrel has inspection markings. The bottom of the bolt has a crowned “U”, also found on the bolt locking block. The top of the bolt stop is marked “861”. The rear face of the bolt has “861”. The top of the bolt locking block is marked “861”, found again inside the magazine floorplate, the top of the magazine follower, the side of the sear arm, sear and the rear of the hammer. The rear of the frame and lock frame are each marked “20861”. The inside of each grip panel is stamped “20861”.

Sights / Optics: The rear sight is a “V” notched rear sliding elevator sight with markings from “1-10” in hundreds of meters, pinned to the barrel extension. The front sight is a blade fixed to the front of the barrel.

Stock Configuration & Condition: The grips are two-piece serrated walnut panels. The grips have scattered light handling wear with wear on their bottoms from the lanyard ring. There are some light nicks and scratches. The serrations are well defined. There are no chips or cracks. Overall, the grips are in about Very Good condition.

Type of Finish: Blued, some parts In The White, a few small parts Fire-Blued

Bore Condition: The bore is gray with well defined rifling. There is light erosion and minor pitting scattered through the bore.

Overall Condition: This pistol retains about 85% of its metal finish. The finish is thinning at all edges. There is scattered light finish wear, most notable in the barrel, the leading edges of the barrel extension, the right of the magazine well, the frontstrap and the backstrap around the stock slot. There are some scattered light nicks and scratches. There is scattered minor surface oxidation and infrequent minor erosion. The action shows operational wear. The screw head is lightly tool marked with a strong slot. The markings are clear. Overall, this pistol is in about Very Good-plus condition.

Box, Paperwork & Accessories: This pistol comes with a wood stock/holster with “20861” marked on the mounting bracket, matching the pistol’s serial number. The stock/holster has a repaired crack at the opening of the holster portion, over the rear sight assembly when the pistol is inserted, with a small repaired chip loss above this. There are some scattered nicks, scuffs and scratches. The holster lid functions properly. Overall, the stock/holster is in Good-plus condition as repaired.

Our Assessment: The Broomhandle Model 1896 Mauser is certainly an interesting looking firearm. Its features are very distinctive with its tangent rear sight, forward magazine, grasping tabs for the bolt and ring hammer. In addition to being used in the Great War, popularized in Soviet films as the iconic weapon of the Russian revolution and civil war, it was also used as a basis for futuristic weapons like the blaster used by Han Solo in Star Wars. This pistol was made around 1899, during a period of design updates and changes. Known as a “Large Ring” among collectors, this pistol has several early features including the first styles of trigger assembly, safety, and extractor. It has a transitional style sight with graduations which go to 1,000 meters, but has 1-10 markings rather than 50-1000. The distinctive Large Ring hammer followed the “Cone Hammer” and preceded the small ring hammers which would be used for most of production. Most C96 pistols of this era show quite a bit more wear, due to both their age and being produced during, and frequently used for, some of the most devastating conflicts of the 20th century. This example is in quite nice condition, especially compared to most other specimens, retaining about 85% of its metal finish, a decent bore, strong mechanics, and all-matching serial numbered parts including its stock/holster! For the collector missing a Large Ring C-96, this is a great find and may even replace a lower condition one already in your collection. Please see our photos and good luck!