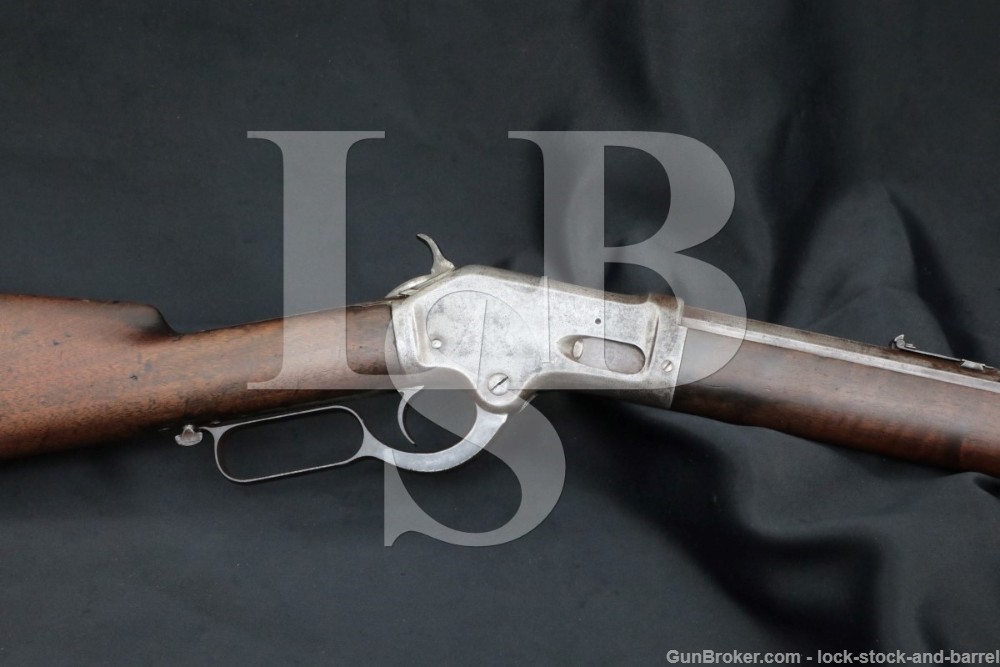 Stock Configuration & Condition: The stocks are two-piece smooth walnut with capped forend, straight grip, straight comb and steel crescent buttplate with sliding door over a storage compartment. The stocks have some scattered nicks, dings, scuffs and scratches, most notable in the sides of the buttstock. There are a few minor grain-line cracks at edges with more notable cracks at the toe on each side. There are small losses at the top-front corners of the wrist on each side of the top tang. The LOP measures 12 7/8” from the front of the trigger to the back of the butt plate. The plate has gone to a moderate patina with some scattered wear and infrequent surface erosion. The stocks rate in about Very Good overall condition as Antique.

Finish Originality: We see no evidence of refinishing.

Bore Condition: The bore is gray with strong rifling. There is scattered light erosion and some pitting in the bore.

Overall Condition: This rifle retains only traces of its metal finish; all of which has turned dark patina. The surfaces of the rifle are generally gray from cleaning an old and dark patina. There is scattered erosion and scratching, with some nicks and edge wear, etc. The action shows operational wear. The screw heads are tool marked with serviceable slots. The markings are generally clear, the rampant colt is worn and incomplete. Overall, this rifle rates in about Very Good condition as Antique.

Our Assessment: Although Colt predominately was a manufacturer of popular revolvers, such as the Colt Single Action Army, the company began in the 1880s to seek to compete against Winchester in the rifle market. In 1882, Colt contacted Andrew Burgess to design a lever-action rifle and by July 1883, production of the new rifle had begun. The Colt-Burgess was produced for sixteen months thereafter, with a total of 6,403 guns manufactured. Approximately 60% of these were of the rifle variation. When compared to production figures of Winchester’s 1873 rifle, the Colt-Burgess failed as a serious competitor to Winchester. From 1873 to 1919, Winchester manufactured 720,610 Model 1873 rifles, or an average of over 15,000 per year.

The short production history of the Colt-Burgess has led to much speculation as to the reason of its demise. According to legend, upon hearing of Colt’s entrance into the lever-action rifle market, Winchester began to develop a prototype revolver to compete with Colt’s market. A “gentleman’s agreement” then followed between Colt and Winchester, with Colt agreeing to drop production of the Burgess and Winchester abandoning its plans to develop a revolver. The truth of this story has never been fully verified, and as such, the reason for the Burgess rifle’s short production history is unknown.

Whether you collect Colts or Winchesters, you need a Burgess in your collection. They are quite rare and when we do see them, they are usually pretty thrashed. This gun shows its age, but still has strong mechanics and a reasonable bore for a 130 year old gun which would have seen exclusive use with black powder. Please see our photos and good luck!