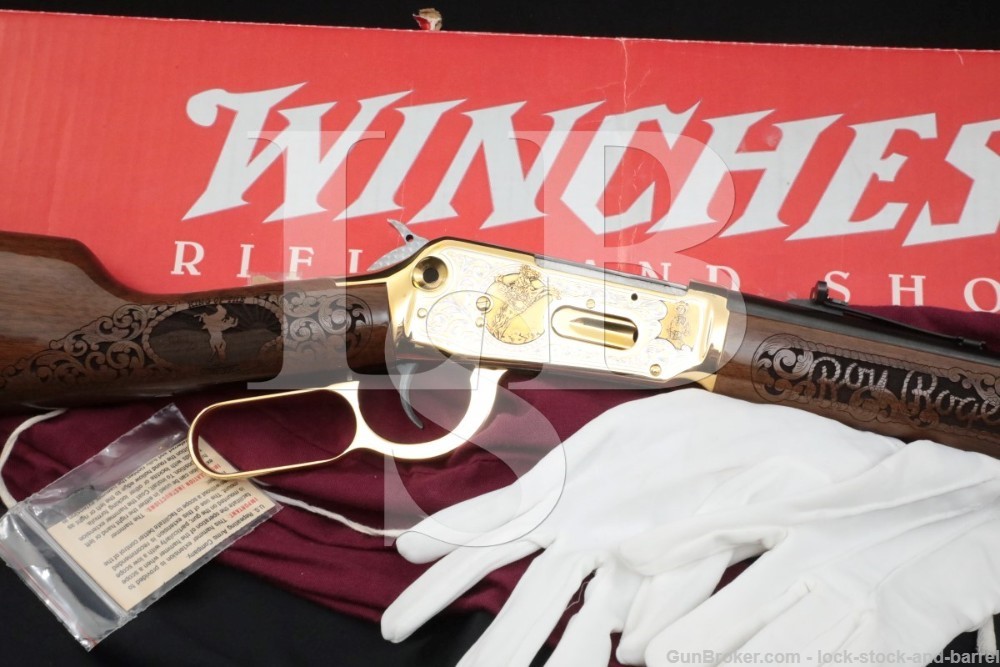 Markings: The left side of the barrel is marked “WINCHESTER MODEL 94AE CAL. 30-30 Win. / -MADE IN NEW HAVEN, CONN. U.S.A. – WINCHESTER PROOF STEEL-”. The top of the barrel bears the Winchester proof mark. The bottom of the receiver is marked with the serial number, “A&A ENGRAVING Inc. / Rapid City S.D.”, “026 of 300”, and ““AMERICA REMEMBERS” TM AHL © MECHANICSVILLE VA.”.  The upper tang is marked “R / R” and with Roy Rogers’s signature. As stated on the ‘America Remembers’ website, “The right side of the receiver features Roy in two familiar scenes, with his six-guns drawn and rearing on his legendary golden palomino, Trigger in 24-karat gold and nickel.  Left side of the receiver features a classic portrait of Roy with his trademark scarf and Stetson in 24-karat gold and nickel. The solid walnut stock is laser-carved to dramatic effect.  On both the left and right sides of the buttstock is a stunning silhouette of Roy and Trigger, posed before a mountainous Western vista at sunrise and encircled with the legend, “King of the Cowboys.”  On both sides of the stock, a winding lariat spells out the familiar signature of Roy Rogers.” The sides of the receiver also have decorative scroll engraving. There is jeweling on the hammer and bolt.

Sights / Optics: The front sight is a gold hooded beaded blade atop a serrated riser that is screwed to the barrel. The rear sight is a U-notch elevator sight with a white triangle aim guide.

Stock Configuration & Condition: The stocks are engraved walnut with a banded forearm, straight grip, straight comb, and a checkered hard rubber Winchester buttplate. The wood shows only a small amount of light finish wear on the left side. There are no chips or cracks. The LOP measures 13 5/8” from the front of the trigger to the back of the checkered hard rubber Winchester plate, which shows no notable wear. The stocks rate in about Fine-Excellent overall condition.

Bore Condition: The bore is bright and the rifling is sharp and deep. There is no erosion.

Overall Condition: This rifle retains about 99% of its metal finish. The balance of the finish shows light handling marks. The gold plating is bright and beautiful. The screw heads are sharp. The markings are crisp. Overall, this rifle rates in about Excellent condition.

Box, Paperwork & Accessories: This rifle comes in a red Winchester box with a cloth protector and white handling gloves. The box has a couple punctures on the back side and one on the bottom. There are several creases.

Our Assessment: This beautiful rifle is a limited Roy Rogers Commemorative number 026 of the 300 that were made. Taken from the America Remembers website, “For generations of kids, Saturday afternoon was time to saddle up. Some settled in for a double feature at the local moviehouse and some strapped on six-guns in the backyard. It didn’t matter where you were because we all ended up in the same place: riding side by side with our favorite cowboys of the Old West. There were plenty of horseback heroes, but every week, that sagebrush crooner and “King of the Cowboys,” Roy Rogers, led the pack. To this day, Roy Rogers remains one of the most popular cowboys ever to ride the range during the golden age of westerns. In his career, Roy appeared in more than 100 films. In 1943, he passed Gene Autry to become Hollywood’s top western star. He stayed at the top of that list for more than a decade. At the height of his popularity, Roy’s films and personal appearances broke all attendance records. His comic books sold over a million copies a month and his television show drew a huge, loyal viewership. Roy Rogers did things bigger and better than everyone else. He could steal the show with a gun or a guitar. He rode the smartest horse in the movies, and he rounded up the scoundrels while still fighting fair. Through it all, he made taming the Wild West look easy. Roy Rogers was a shining example of good old cowboy values, and a role model who showed us the difference between right and wrong. No matter how many unscrupulous individuals tried to bring him down, Roy proved that goodness always prevailed.” This rifle is handsomely decorated in 24-karat gold artwork. Barrel bands, lever, trigger, hammer, and hooded site are decorated in 24-karat gold. This rifle is in excellent condition and is waiting to be taken home by one lucky bidder. Please see our photos and good luck!