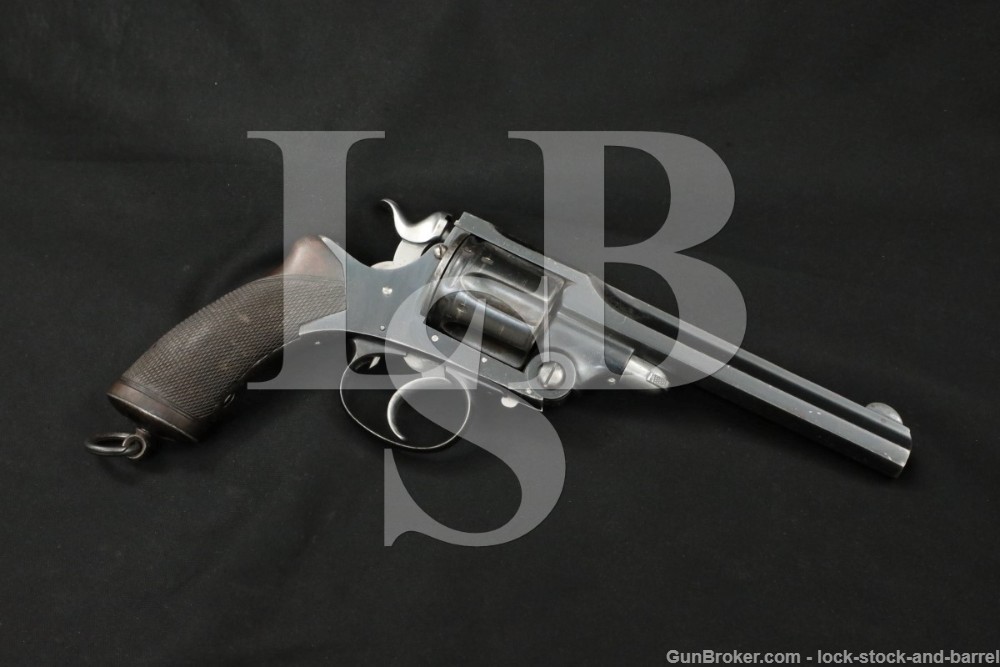 Sights / Optics: The front sight is rounded blade pinned to the barrel rib at the front. The rear sight is a “V” notch in the topstrap and the lug at the top-rear of the frame.

Stock Configuration & Condition: The grip is one-piece checkered walnut with a lanyard ring on the butt cap. The grip has light handling wear with some scattered light nicks, scuffs and scratches. The checkering is generally well defined. There are no chips or cracks. Overall, the grip is in Very Good-Fine condition as Antique.

Bore Condition: The bore is gray, the rifling is well defined. There is scattered light erosion and pitting in the bore.

Overall Condition: This handgun retains about 80% of its current metal finish. The finish is thinning at all edges. There is handling wear in the frontstrap. There is scattered minor surface oxidation, most notable in the cylinder flutes. There are several scattered light nicks, scuffs and scratches. There is a dent on the rear edge of the cylinder, leaving the rim recess on one chamber slightly out of round. The action shows operational wear, including turn-wear on the cylinder. The screw heads range from sharp to tool marked with strong slots and there are tool marks around most screw heads. The markings range from clear to worn and incomplete. Overall, this handgun rates in Very Good-plus condition as refinished Antique.

Mechanics: The action functions correctly. The barrel locks to the frame with very little play. The cylinder locks up with little play on each chamber when the trigger is depressed. We did not fire this handgun. As with all used firearms, a thorough cleaning may be necessary to meet your maintenance requirements.

Our Assessment: William Tranter had a large influence in early British cartridge firearms. He partnered with James & Isaac Hollis, made improvements to the Adams revolver, was a founder and director of the Birmingham Small Arms Company (BSA), and when he retired he sold his company to George Kynoch, his friend. He had contracts with the British government for military revolvers as well as Snyder rifle conversions. He even sold revolvers to both the Confederacy and the Pinkertons! This is his ultimate revolver design, the Model 1879. It is a robust top-break revolver and was retailed by William Moore & Grey of London. The revolver is in nice shape given its age, having been refinished so it still looks great. This will make a great addition for any collector who has an interest in early cartridge revolvers, especially British revolvers. Please see our photos and good luck!