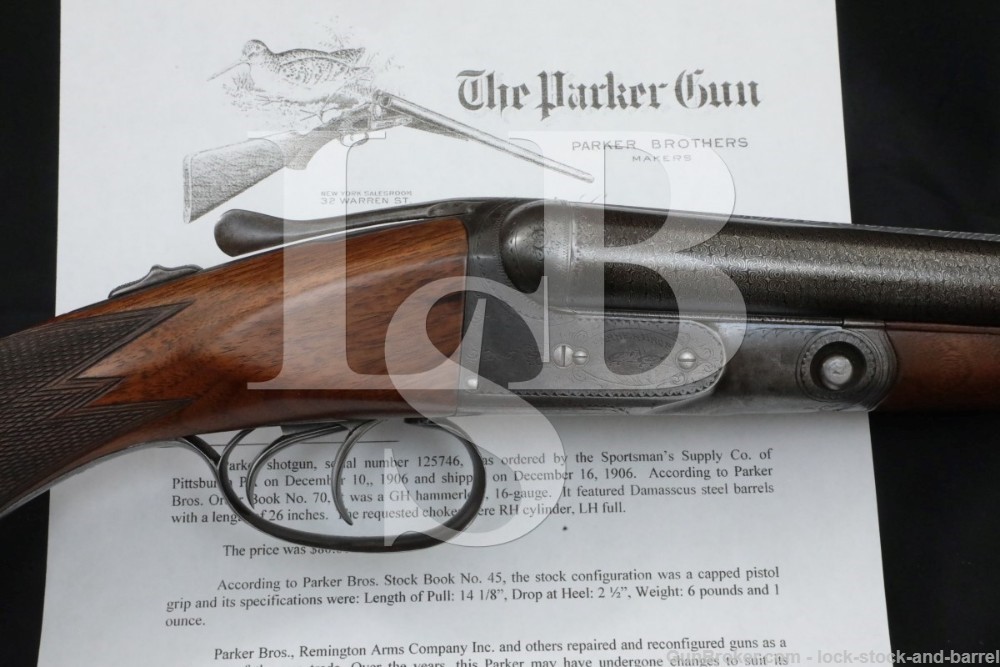 Stock Configuration & Condition: The stocks are two-piece checkered walnut with splinter forend, capped pistol grip, initial plate inlaid to the belly, straight comb and checkered black hard rubber Parker Bros buttplate with Dog scene. The forend has an inlaid steel tip. The stocks have a few scattered minor marks and some minor scuffing along each side of the stock behind the grip. There are a few very minor losses around the front edges of the wrist and a tiny repaired crack at the rear of the top tang. The checkering is well defined. The drop at comb is approximately 1 5/8″, drop at heel 2 1/2″. The cast is about neutral. LOP measures 14 1/8″ and 13 1/4″ from the fronts of the triggers to the back of the buttplate. The plate has light wear, mostly at the heel and around the edges, with good detail in the dog and generally well defined checkering. Overall, the stocks are in about Fine condition as professionally restored.

Finish Originality: Per the consignor, this shotgun was restored by Brad Bachelder of Bachelder Master Gunmakers, though we suspect that the receiver’s finish is original.

Bore Condition: The bores are mostly bright. There is infrequent minor erosion in the bores and some stubborn fouling toward the muzzles. The bores appear to have had a few dents pressed out.

The consignor provided minimum barrel wall thickness measurements. We have not measured the wall thickness and these figures should be confirmed prior to firing: Left- 0.027″, Right- 0.031″

Overall Condition: This shotgun retains about 87% of its metal finish. The barrels have strong damascus patterning with some thinning at the edges and a few nicks along the edges of the rib. The exposed portions of the receiver have mostly muted, with strong color around the triggers, under the lever, and on the water table. The muted areas show some discoloration from oxidation. The receiver has a few minor marks. The action has operational wear. The screw heads range from sharp to lightly tool marked with strong slots. The markings are clear. Overall, this shotgun is in Very Good-plus condition as restored.

Box, Paperwork & Accessories: This shotgun comes with a Parker Gun Collectors Association letter which confirms that this shotgun was ordered by the Sportsman’s Supply Co. of Pittsburgh, PA on December 10, 1906 and shipped December 16, 1906 as a GH Hammerless 16 GA with 26″ Damascus barrels choked Full and Cylinder Bore. The original stock configuration was a capped pistol grip, 14 1/8″ LOP, 2 1/2″ drop at heel, and a weight of 6 pounds 1 ounce.

Our Assessment: This Parker Brothers GH Grade Hammerless comes to us from 1904. The GH Grade filled a gap between the lower grade or “knockabout” guns and the higher grade or “fine” guns, offering a finer quality fit and finish, engraving and style in a gun which could still be taken to the field without feeling like you’re ruining a presentation piece. This example is a 16 gauge made on the desirable size 0 frame, resulting in a fantastically light gun, just over six pounds. Its 26″ barrels are choked Full and Cylinder Bore, making for a versatile, fast-handling gun that won’t wear you out even if you’re in the field all day. The gun has bee restored by Brad Bachelder of Bachelder Master Gunmakers, but has no notable deviation from its factory configuration apart from the barrel and stock finishes. Mr. Bachelder found the gun sound mechanically when he inspected the gun, but it wouldn’t hurt to double-check before firing. It ought to make for a great upland bird gun for the lucky winner. It will also make a nice addition to a Parker collection. Please see our photos and good luck!