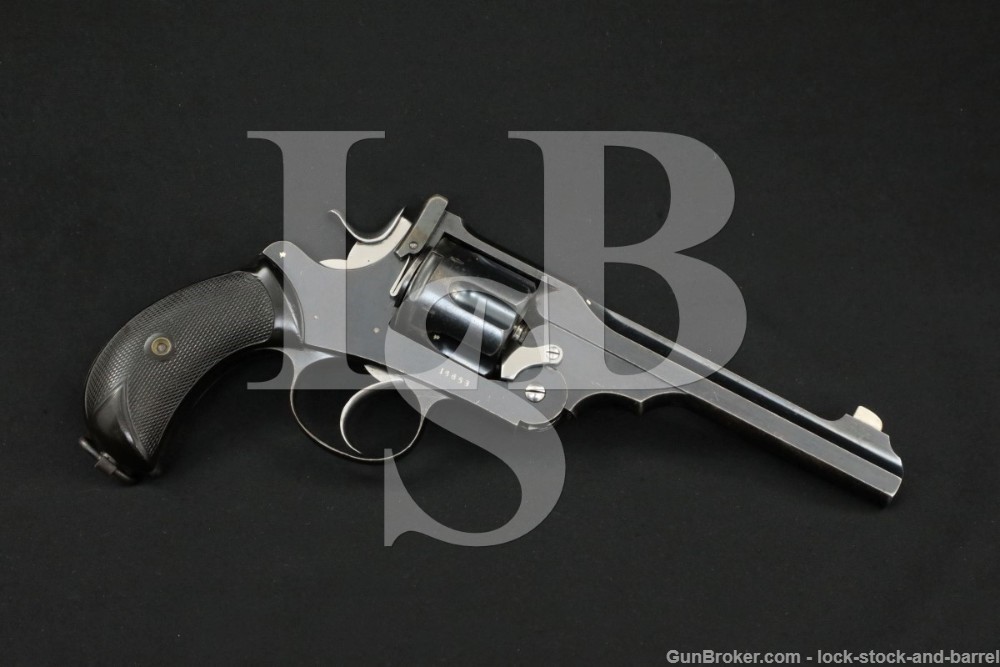 Stock Configuration & Condition: The grips are checkered black vulcanite on a bird’s head grip frame. The smooth borders of the grips show several nicks and scratches. The top rear of the right panel has an area of repaired material loss. The checkering is generally well defined with a couple of minor interruptions on the right panel. The grips are in about Good-Plus overall condition as repaired and Antique.

Bore Condition: The bore is mostly bright with some scattered faint erosion and well defined rifling.

Overall Condition: This handgun retains about 13% of its metal finish. There is scattered light oxidation throughout with the most notable on the bottom of the barrel, on the back strap, the trigger guard, and on the cylinder. There are also scattered little nicks and scratches throughout. There is thinning at all leading edges. There is some minor pitting on the top edge of the barrel latch. The cylinder shows a distinct turnline. The screw heads range from sharp to lightly tool marked with strong slots. The markings are all clear. Overall, this handgun rates in about Very Good condition as Antique.

Mechanics: The action functions correctly. The cylinder lockup produces some play in single action and barely any when the trigger is depressed. The barrel locks up tightly with no play. We did not fire this revolver. As with all previously owned firearms a thorough cleaning may be necessary to meet your maintenance standards.

Our Assessment: From “Webley Revolvers” by Bruce & Reinhart: “The Webley W.G. models started with the Model 1886 and ended with the Model 1896. The revolver’s “W.G.” marking was meant to represent “Webley Government” model. This model was sold to both civilians and to officers of the British Army (who had to supply their own personal weapons), and there was also a target version available with target sights. Unlike the matte finish of the Service revolvers, the W.G. models had a polished blued finish. The W.G. revolvers achieved almost immediate success in shooting matches. At the 1889 NRA Wimbledon Camp matches, celebrated American shooter Chevalier Ira Paine found his revolvers were not eligible, picked-up a Model 1889 he had never shot before, and obtained three “Highest Possible” scores with it.”. This revolver was sold to the Army and Navy Cooperative Society for sale to British officers, and with the British being involved in several wars in Africa during the late 1890s as well as conflicts in Afghanistan, the revolvers were probably sold as fast as they could be made. This revolver has a 6” barrel marked with the distributor’s name. It has its original finish and all of the parts have matching serial numbers, including the grips. The revolver is in about Very Good condition with 73% of its finish remaining. One interesting and puzzling aspect about this revolver is the W.C. REID / I.S.C” marking on the backstrap. Despite our best research efforts, we could not come up with any specific information to clarify what this marking refers to. It could also very well be the initials of the first owner but who knows? This would make a fine addition to a Webley revolver collection as well as a fun research project. Please see our photos and good luck!