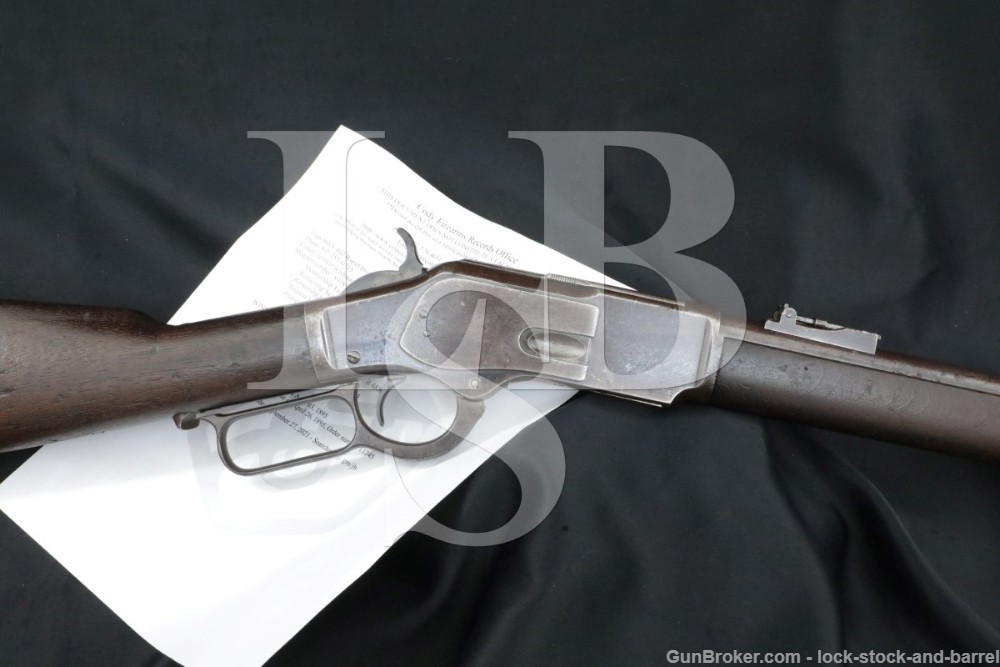 Sights / Optics: The front sight is a tapered blade integral to a rectangular base fixed to the front of the barrel. The rear sight is a folding ladder-type with “V” notch when folded down and a “V”-notched slider on a ladder marked from “2” to “8” when folded up. There is a small “V” notch in the top of the ladder. The top tang is drilled, tapped and filled for a tang sight (none included).

Stock Configuration & Condition: The stocks are a two-piece walnut set with nosecap, two barrel bands, straight grip, straight comb, carbine-style steel buttplate with sliding door, a sling swivel in the belly and another mounted to the forward barrel band. The stock has a storage compartment behind the sliding door in the buttplate. The stocks have some scattered nicks, dings, scuffs and scratches. There are no chips or cracks. The LOP measures 12 3/4? from the front of the trigger to the back of the buttplate. The plate has gone to a light-moderate patina with scattered wear and surface erosion. Overall, the stocks rate in Very Good-plus condition as Antique.

Bore Condition: The bore is mostly bright and the rifling is sharp. There are some scattered spots of light erosion and minor pitting, nearly all in the grooves along the edges of the lands.

Overall Condition: This rifle retains about 15% of its metal finish. Most of the finish is in the left of the receiver and the left sideplate, but there is some on the bottom, the bottom tang, the right of the receiver, and in some other protected areas. Other surfaces have gone to a mottled light patina with some areas and all edges worn to white. There are scattered nicks, scuffs, scratches and some minor surface erosion. There is a patch of more notable erosion on the left of the receiver and left sideplate. The action shows operational wear. The screw heads are mostly sharp with a few showing tool marks with strong slots. The markings are clear. Overall, this rifle is in Very Good condition as Antique.

Mechanics: The action functions correctly. The hammer has a half-cock safety position, lever safety, lever lock on the lower tang, and a dust cover on the receiver that slides on an integral rail typical of the Third Models. We have not fired this rifle. As with all used firearms, a thorough cleaning may be necessary to meet your maintenance standards.

Box, Paperwork & Accessories: Included is a Cody Firearms Records Office search which shows that this rifle had its serial number applied September 6, 1894, was received in Winchester’s warehouse April 3, 1895 and shipped as a Musket April 26, 1895 on Order Number 11245. Unfortunately, the records search did not include any information about where the rifle was shipped.

Our Assessment: One of the most successful, and certainly one of the most famous Winchester rifles was the Winchester Model 1873, known as “The Gun that Won the West” for its predominant role in the hands of Western settlers. The Model 1873 had a steel frame that was much stronger than the brass framed Model 1866, allowing Winchester to develop a family of powerful new cartridges, with Colt usually producing Single Action Army revolvers in the same calibers shortly after they were developed. The .44-40 Win. cartridge, also known as the .44 WCF, was introduced by Winchester in 1873 as Winchester’s first metallic centerfire cartridge. Colt produced a single action revolver chambered for this cartridge in 1877. Through law enforcement use and hunting, and made popular through its dual use in rifle and pistol, the .44-40 soon became the most popular cartridge in the United States. It led to the M1873 Winchester being called “The Gun That Won The West”, and has the reputation of killing more deer in the United States than any other save the .30-30 Winchester. This Model 1873 Musket was made in 1895, has a 30” round barrel chambered for 44-40 and a carbine-style buttplate with sliding-door compartment. The rifle has a US marking on the buttplate, US-style “U” markings on the barrel bands and inspector markings on the receiver and stocks. The rifle is in Very Good overall condition as Antique with some of its original finish remaining, a surprisingly nice bore, and strong mechanics. This rifle is 126 years of age, but is still in good shape. The 1873 muskets are not particularly common, consisting of about 5% of total 1873 production, and one in this condition will take a prized spot in a collection of lever action rifles next to its 1866, 1876, 1892 and 1894 cousins. Please see our photos and good luck!