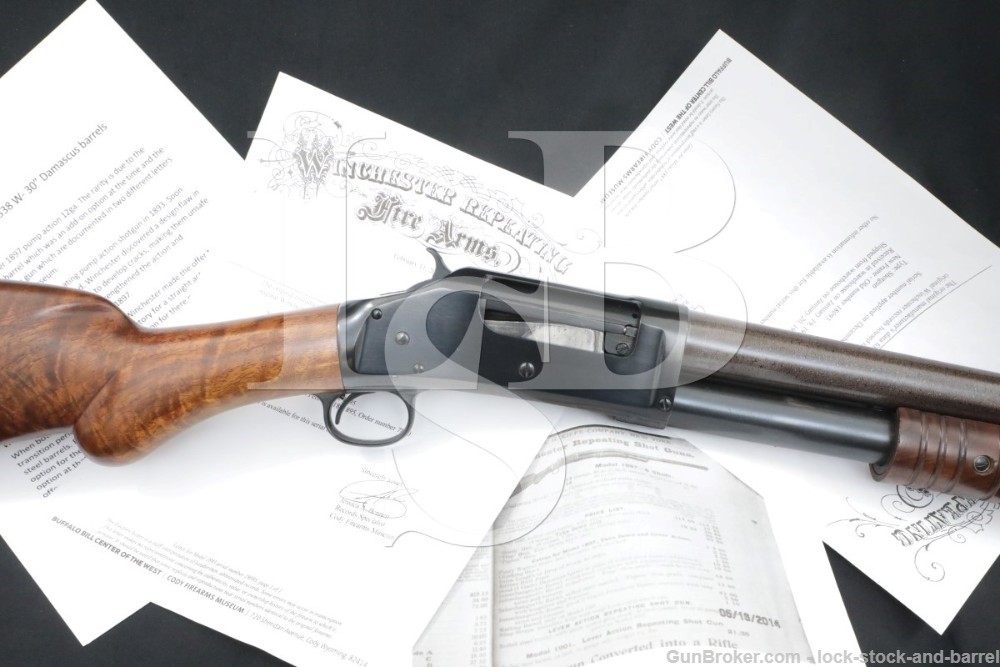 Sights / Optics: There is a brass bead at the front of the barrel. The top of the receiver has a shallow groove for a sighting plane.

Stock Configuration & Condition: The stocks are two-piece select walnut with grooved slide handle, semi-pistol grip, straight comb and smooth steel buttplate. The slide handle has 14 grooves in front of its three mounting screws and three behind. The slide handle has a few light nicks and tool marks around the screw heads. The buttstock has only light handling marks. There are no chips or cracks. The LOP measures 13 5/8″ from the front of the trigger to the back of the buttplate. The plate has some minor erosion under the finish. Overall, the stocks are in Fine-Excellent condition as not original to the gun.

Finish Originality: Per the consignor, this shotgun was restored by Brad Bachelder of Bachelder Master Gun Makers and the stocks were made by Donnie Gemmes of Show-Me GunStocks in Missouri.

Bore Condition: The bore is light gray. There is light erosion scattered through the bore.

Overall Condition: This shotgun retains about 96% of its current metal finish. Most of the balance is light operational wear. The barrel has generally strong damascus finish with infrequent spots of light erosion. There is some minor erosion under the finish on the blued parts, most on the magazine tube. The screw heads range from sharp to tool marked with strong slots. The markings are clear. Overall, this shotgun is in Fine condition as refinished and customized.

Box, Paperwork & Accessories: Included with this shotgun are two Cody Firearms Museum Winchester Factory letters and a letter from the consignor with some information about the gun. One letter confirms that Model 1897 serial 306338 had its serial number applied December 4, 1905 and was a replacement frame for Model 1893 serial number 18093. It was received in the Winchester warehouse January 19, 1906 and shipped on the 20th on order number 5308. The second letter is for Model 1893 serial 18093 and confirms that shotgun had its serial applied February 15, 1895 and was received in the warehouse and shipped February 18, 1895 with a 30″ Fine Damascus barrel on order number 7830.

Our Assessment: The 1897 was perhaps the best and most prolific shotgun ever made. It followed the 1893, which was the shotgun that Browning wanted to design even before the lever actions. He preferred the slide action to the lever action, only producing the lever action 1887 at Winchester’s behest. The 1893 is often referred to as the “wellspring” of all pump shotguns, even those manufactured today. It lead to the 1897, which eventually lead to the Model 12, 1200, etc. Over 1,000,000 Winchester 1897’s were manufactured through 1958. This example has a very interesting history. It appears that the owner of Model 1893 serial 18093 returned their gun to the Winchester factory to have their receiver replaced with a Model 1897 receiver. Winchester offered to replace any Model 1893s with a Model 1897 due to concerns about the safety of new smokeless shells. It appears that this owner preferred to keep the original gun’s Fine Damascus barrel, according to the information in the included Winchester Factory Letters. The gun has been lovingly restored by Brad Bachelder and Donnie Gemmes. The stocks have beautiful grain and the gun has a distinctive appearance due to the Fine Damascus Model 1893 barrel. The result is a striking shotgun which would make a great display in a collection of Winchester shotguns. Please see our pictures and good luck!