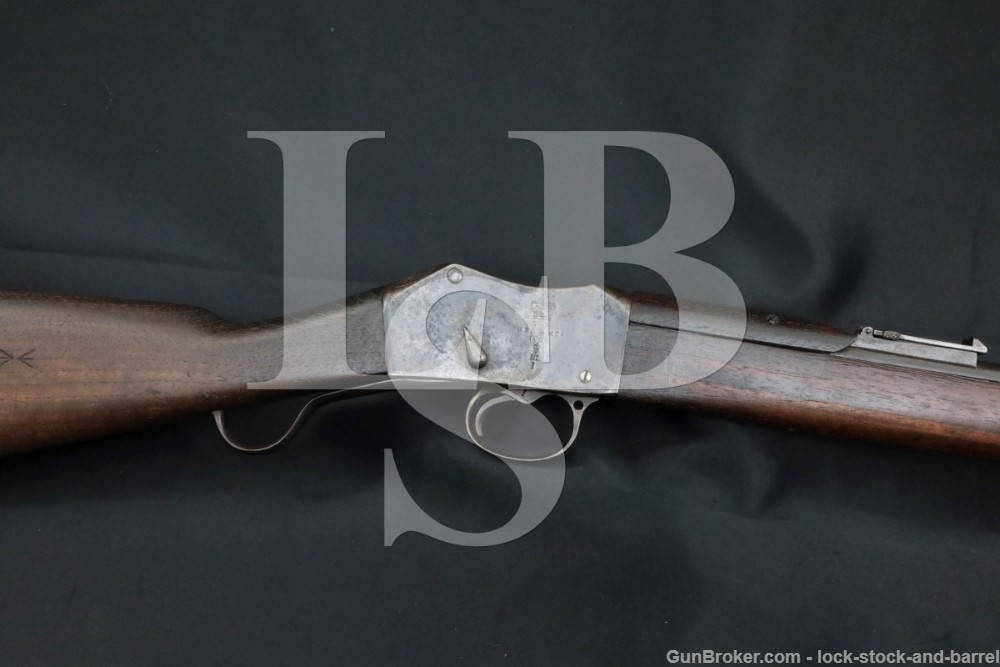 Serial Number: There is no serial marking on the receiver, the barrel has serial number 7710.

Sights / Optics: The front sight is a blade integral to a base fixed to the front of the barrel. The rear sight is a “V” notched sight escalator when down. The left side of the rear sight base is marked “WD” and “200 300 400 500” for use with the escalator. When flipped up it becomes a sight ladder that uses a separate sliding “V” notched blade. The ladder is marked from “6– 17”. There is a very small notch at the top of the ladder.

Stock Configuration & Condition: The two piece hardwood stock has a straight grip, metal nosecap, two barrel bands, one with stacking swivel and one with sling swivel, wood handguard between the rear sight and receiver, a metal buttplate, sling swivel in the belly, and a metal insert to catch the end of the lever. The stocks have some scattered nicks, dings, scuffs and scratches. The forend has a slot for a cleaning rod, but none is included. There is a small loss at the toe. There is some discoloration from age and oil. There are no cracks. The LOP measures 14 1/4 inches from the front of the trigger to the back of the buttplate. The plate has gone to a moderate-dark patina with wear at the heel and some scattered solid erosion. The stock’s markings are generally clear, the struck out markings are fairly crisp. The stock rates in Very Good-plus overall condition as Antique.

Overall Condition: This rifle retains about 50% of its metal finish. The rifle shows fairly evenly distributed wear, discoloration and some surface erosion. There are some scattered nicks, scuffs and scratches. The action shows operational wear. There are tool marks around most screw heads. The screw heads show use with serviceable slots. The markings are clear. Overall, this rifle rates in Very Good-Fine condition as converted and Antique.

Our Assessment: This beautiful Martini Enfield Rifle MK I was originally made as a Martini-Henry Mark III by the Birmingham Small Arms & Metals Co. back in 1886, it was converted to its current configuration by the Royal Small Arms Factory (RSAF) Enfield, which conversion consisted primarily of getting rid of its Henry rifled .455 caliber barrel and replacing it with a .303 Enfield rifled barrel. It has tons of markings on the metal and wood which are in great shape; which is very surprising since this rifle is 135 years old. This is one of the last Martini pattern rifles to serve the British Empire and will add nicely to a British arms collection. Please see our photos and good luck!