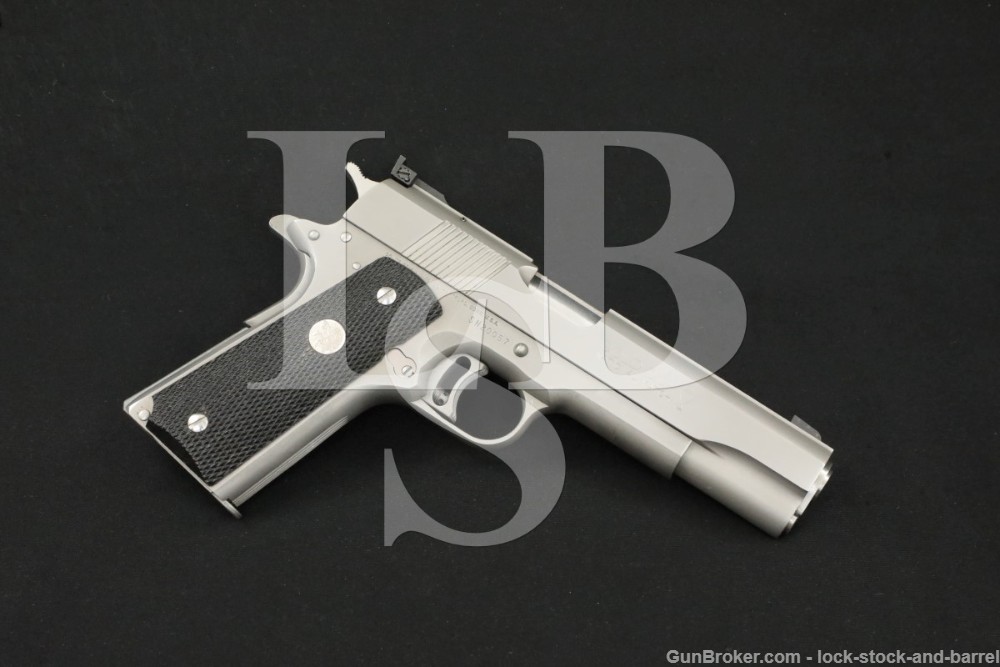 Sights / Optics: The front sight is a blade that is fixed to the finely serrated top rib of the slide. The rear sight is an square notch that is adjustable for windage and elevation pinned to the rear of the slide.

Stock Configuration & Condition: The grips are two-piece checkered black wood with silver-colored Colt medallions. The grips have a few scattered light nicks, most notable under the medallion on the right panel. The checkering is generally sharp. There are no chips or cracks. Overall, the grips are in Fine condition.

Overall Condition: This handgun retains about 96% of its metal finish. The action shows light operational wear. There are a few scattered light nicks, scuffs and scratches including a light “idiot mark” under the slide stop on the left of the frame. There is a nick on the inside of the dust cover which shows on the right exterior of the dust cover. The screw heads range from sharp to tool marked with strong slots. The markings are clear. Overall, this handgun rates in Fine condition.

Mechanics: The action functions correctly. The slide has barely perceptible play to the frame. The barrel bushing is a Series ’70 collet-style bushing. The trigger is light and crisp. There is a Series 80 firing-pin block safety. We did not fire this handgun. As with all previously owned firearms, a thorough cleaning may be necessary to meet your maintenance standards.

-Total of one 7-round Colt magazine.

Our Assessment: Introduced as an off-the-shelf target pistol, Colt’s Gold Cup National Match 1911s have been a benchmark standard of quality for decades. There have been some variations since their introduction in the late ’50s, the Series ’70 introduced a collet barrel bushing, series ’80 a firing pin safety, and newer models offered various combinations of features, grips and sights. This is one of the later Series ’80 Gold Cup National Match pistols with a firing pin safety, Elliason sight pinned to its ribbed slide, and stainless steel construction. It has had a Series ’70 collet-style bushing installed which has a fairly tight fit. The pistol shows signs of responsible use, retaining a great bore and strong mechanics. Whether you’re looking for a great 1911-style target pistol or want to add a stainless Gold Cup National Match to your collection, this is a nice old pony. Please see our photos and good luck!