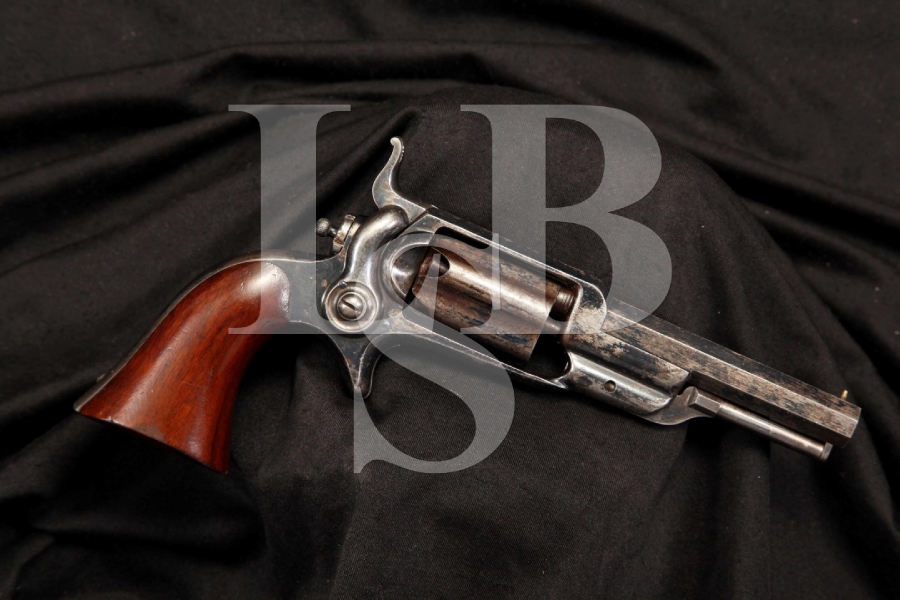 Sights / Optics: The front sight is a brass cone at the front of the barrel. The rear sight is “V” groove in the top strap.

Stock Configuration & Condition: The one piece grip is varnished walnut. Both sides show compression and handling marks with a large compression mark accompanied by finish loss at the bottom edges of the grips, with additional compression marks on the lower front edge. The grips rate in about Very Good overall condition.

Type of Finish: The finish is blued with a case colored hammer.

Bore Condition: The bore is bright and the rifling is sharp. There are spots of erosion in the flats about 3” from the muzzle.

Overall Condition: This handgun retains about 25% of its metal finish, mainly on the frame and in the protected areas. The barrel shows finish loss from polishing, polishing marks and erosion. The cylinder also shows finish loss from polishing and a small amount of erosion at the front and rear edges. The frame shows spots of surface loss with scratches on the sides and bottom of the loading lever housing and light handling marks on the trigger guard and backstrap. Both sides of the hammer show compression marks, but the hammer checkering is sharp, the case coloring is still deep and the side serrations on the front of the hammer are still sharp. One of the frame screws and the screw in the backstrap are disfigured, and the other screws show marks of a screwdriver. The markings are shallow but clear for the most part. Overall, this handgun rates in about Fine condition.

Mechanics: The action functions correctly. It is a little stiff but crisp. The cylinder lock-up has a small amount of play. We did not fire this handgun.

Our Assessment: In 1855, Colt introduced a spur trigger revolver that featured a fully-enclosed cylinder, Colt’s only percussion solid-frame revolver. These Model 1855 Sidehammer, or “Root” pocket revolvers, were named for Elisha K. Root, a noted inventor and holder of the Sidehammer patent, who at that time was employed as Colt’s Factory Superintendent and Chief Engineer. They were made in several different models and two calibers: .28 and .31. The first two models were .28 caliber revolvers with unfluted cylinders featuring engraved scenes. This 3rd Model is also in .28 caliber and has a 3 ½” octagon barrel and fluted cylinders. It is in Very Good condition with surface loss and erosion, but in great mechanical condition. This is a unique Colt revolver in that all other percussion revolvers (both before and after) had an open top for ease of maintenance. It wasn’t until the 1873 SAA that Colt turned to solid frame revolvers for good. This revolver deserves a spot in any serious Colt collection but would also make an excellent start to a beginning collection.