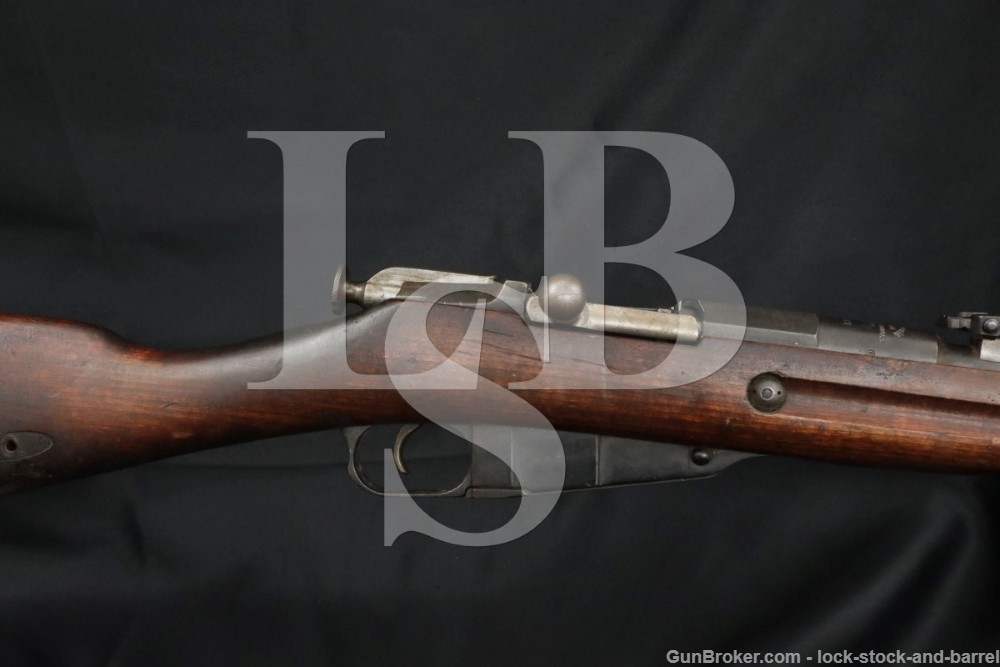 Sights/ Optics: The front sight is a blade which has been dovetailed to the muzzle end of the barrel. The rear sight is a tangent leaf rear sight with a “V”-notch and is marked “12”, “10”, “8”, “6”, and “4” on the left side, which is graded in the old Russian arshini measurement system. The bottom of the sight is numbered 13 through 32 inclusive which are also in the old arshini system. The sight bar can be used when the leaf is raised and it features a “V”-notch which is adjustable.

Stock Configuration & Condition/ Grip: The stock is two-piece arsenal refurbished wood featuring a forend that has a cap, slot for a cleaning rod (the cleaning rod is not included), slot with metal washer for a sling, two barrel bands that each have attachments for sling swivels (no swivels are included), a through bolt, a forend grip  while the buttstock has a straight grip, a slightly curved comb, a slot with metal washer for a sling and a metal buttplate. The stocks have moderate handling wear which includes dings, nicks and scrapes. Notably, the bottom of the butt and forend where arsenal refurbished and the splice markings are visible. The left side of the forend at the rear end of the bolt has a small chip, the right side of the forend is missing two screws that fit in front of each barrel band, and the bottom of the grip has a ding and scratch. The LOP is 13.5” from the trigger to the rear end of the buttplate. The buttplate has some wear which includes some oxidation which shows through the finish and handling marks. Overall, the arsenal refurbished stock is in Good condition for an antique.

Bore Condition: The bore is grey. The rifling is sharp. There is erosion in the bore which is concentrated in the grooves.

Overall Condition: The rifle retains about 75% of its metal finish. The rifle has moderate handling wear including patches of oxidation, scratches and nicks. Notably, the muzzle has some operational wear and most of the leading edges have finish loss. The markings remain clear. The screwheads remain serviceable. Overall, the rifle is in Very Good condition for an antique.

Our Assessment: This Imperial Russian Mosin Nagant model 1891 is a bolt-action rifle with fixed magazine that takes 7.62x54mmR rounds that was produced at the Tula Arsenal. The model 1897 was the standard rifle of the Imperial Russian military, and later Red Army, until the 1930s. The Imperial Russian Army first used these rifles during the Russo-Japanese War in 1905, it would later be employed during the First World War (WWI) and the Russian Civil War. The eventual successor of the model 1891 which was the 1891/30 introduced into the Red Army in the 1930s and would remain the Soviet Union’s primary rifle until the end of the Great Patriotic War (WWII). This is a rare item to come across as most of the old Imperial Rifles were altered by the Soviet and Finnish governments following the end of the Russian Civil War, while this rifle still proudly displays its Imperial markings. This is an Antique rifle you do not want to miss out on!