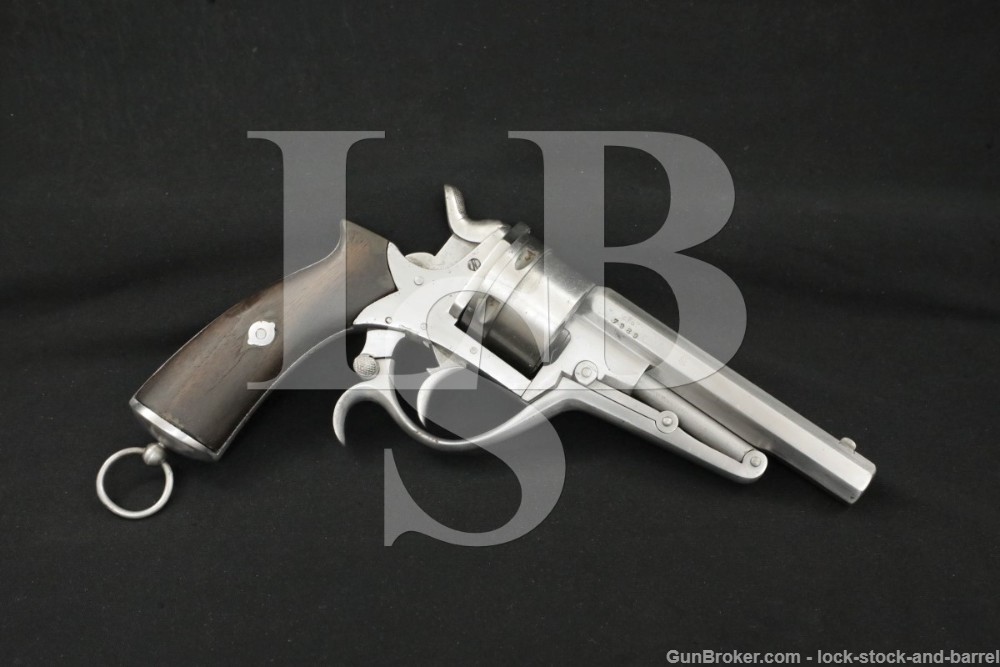 Caliber: 12mm Perrin (at the time this measurement was based on the case rather than the bullet, which was technically 11mm. Specifically, this revolver was chambered for 11.5×15.5mm)

Sights/Optics: The front sight is a small blade dovetailed flush into the front of the barrel. The rear sight is a v-notch that is integral to the frame.

Stock Configuration, and Condition: The grips are two-piece offset smooth wood panels; the left panel is thicker than the right. Both panels are rather dark in appearance and both have scattered minor dings and compressions as well as intermittent minor nicks along their edges. Most notably the left panel has split in two vertically and was at some point mended. There are no chips. Overall, the grips rate in Good condition, as antique.

Bore Condition: The bore is mostly dark with well-defined rifling. There is no apparent erosion, but moderate stubborn fouling persists throughout.

Overall Condition: This pistol was manufactured bright, or “in the white”, and as such there is no finish to assess; however, light surface oxidation can be found in some areas, most notably on the barrel and cylinder, and there are light nicks and scuffs most notably on the cylinder edges, the re-loading lever, and the barrel tip. Moderate surface oxidation can be found on all surfaces of the grip frame protected by the wood panels. Screws have light tool marks with strong slots and pins are not peened. All markings are clear. Overall, this pistol rates in Very Good condition, as Antique.

Mechanics: The action functions correctly. The revolver is re-loaded by pulling backward a release behind the trigger and then actuating the lever forward. These mechanics function correctly and lock up securely. The double action is heavy, the single-action is crisp and rather light. We did not fire this revolver. As with all used firearms, thorough cleaning may be necessary to meet your maintenance standards.

Our Assessment: Charles François Galand patented this revolver in the year for which it is named, 1868. It was at the time not just a novel firearm possessed of eye-catching design mechanics, but it was also a fast gun; re-loading consisted of dropping the lever and allowing the spent cartridges to simply drop out. While the user then did have to reload one cartridge at a time, considerable effort was saved by the simple removal of spent cartridges. This capability was enough to catch the eye of the Russian Navy who would go on to adopt a slightly modified version of the M1868, calling it the M1870. Galand spun many plates, manufacturing these revolvers in Britain, France, and Belgium, and sought also to have them adopted by the British and French militaries. That did not pan out, and Galand then turned his eye to the commercial market, where this example would have been procured. This is a Belgian made M1868 manufactured some time between 1868 and 1872 and, like most commercial versions, bears very few markings beyond Galand’s own trademark and the serial number; French examples did not feature proof marks as this example does. In overall Very Good condition for an antique, this M1868 has relatively little wear, mostly oxidation on the metal and fouling in the bore, and is mechanically sound. In our estimation, what made this revolver so interesting in the late 1800s is still true today—it is indeed novel and eye-catching, but is also sturdy and functional, despite its elaborate nature. A collector would do very well to scoop this revolver up. Good luck and happy bidding!