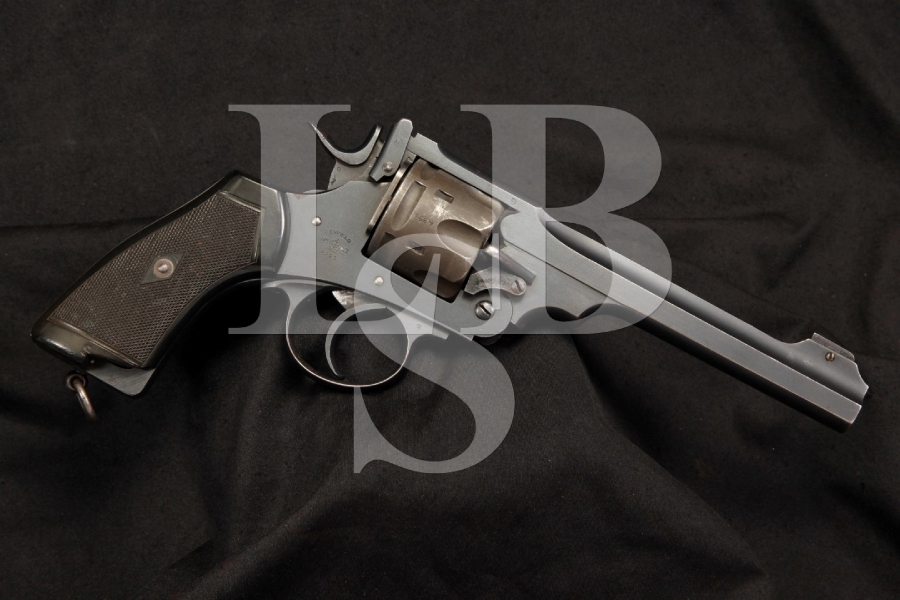 Barrel Length: The barrel has a full length rib with flat sides and a round underside. It is 6” in length.

Sights / Optics: The front sight is a Patridge style blade pinned to a raised slotted base on the barrel. The rear sight is a square notch at the bottom of a “V” in the top of the top strap latch.

Type of Finish: The finish appears to be Parkerized black, with a slightly lighter color to the cylinder.

Finish Originality: The finish appears to be original.

Bore Condition: The bore is bright and the rifling shows a slight amount of wear. There is no erosion in the bore.

Mechanics: Both the top latch lock-up and the cylinder lock-up are SOLID, with no play. The trigger pull is smooth in both single and double action, and breaks crisply in single action. The thumb latch return spring is missing. The action functions correctly. We did not fire this handgun.

Our Assessment: From Wikipedia: “The Webley Revolver was, in various versions, the standard issue service pistol for the armed forces of the United Kingdom, the British Empire, and the Commonwealth from 1887 until 1963. The Webley is a top-break revolver with automatic extraction. The Webley Mk I service revolver was adopted in 1887 and later the MK VI was introduced in 1915 during the First World War. The MKVI is perhaps the best-known model, and firing the large .455 Webley cartridge, it is among the most powerful top-break revolvers ever produced.” Many of the MKVI revolvers had their cylinders modified to accept .45 ACP cartridges, but this revolver is still in its original caliber, complete with lanyard ring, and with matching numbers on the cylinder, frame and barrel. This is a great find for the collector of WWI and WWII weaponry. It is very unusual to find one in this Excellent condition that hasn’t been refinished or modified.