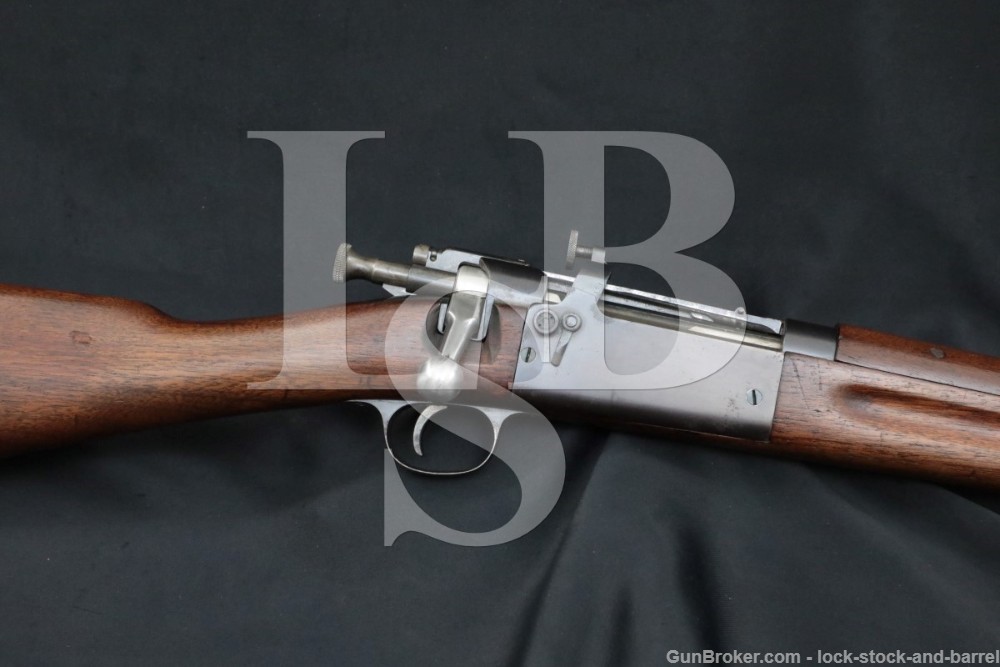 Year of Manufacture: December, 1897 (see page 233 of The American Krag Rifle and Carbine by Joe Poyer). The Stevens-Pope Eccentric Barrel Conversion was sold between 1901 and 1904.

Markings: The left side of the receiver is marked “U.S. / MODEL 1896. SPRINGFIELD ARMORY. 106203”. The barrel band is marked “U”. The rear of the bolt handle is marked “X / S18”. The top of the barrel is marked “STEVENS-POPE / MANUFACTURED BY THE J. STEVENS ARMS & TOOL CO. CHICOPEE FALLS. MASS. U.S.A.”. We removed the handguard to view the barrel markings.

Sights / Optics: The front sight is a pinned blade set atop a raised base. The rear sight is a custom adjustable aperture assembly. The riser is built into the side plate. The lever unlocks the riser and which can then be raised or lowered by rotating the knob. The top of the barrel, under the handguard, is drilled & tapped with 2 holes that can be used to secure a sight.

Stock Configuration & Condition: The hardwood stock has a straight grip, cutout for the bolt handle, 2 barrel bands (one on top of the other), 2 sling loops, and a metal buttplate with hinged door for storage. The buttplate shows scrapes, scratches, and thinning. The wood shows several scrapes, scratches, and compression marks. Many have damaged small portions of the surface wood. Most of these marks have been oiled over. The LOP measures 13 ½ inches from the front of the trigger to the back of the buttstock. This stock rates in about Very Good overall condition.

Bore Condition: The muzzle and grooves are light grey. The rifling is deep. There is fouling & intermittent light erosion erosion at the muzzle and in the grooves.

Mechanics: This is now a single shot rifle.
The action functions correctly. We did not fire this rifle. As with all used firearms, a thorough cleaning may be necessary to meet your maintenance requirements.

Our Assessment: This Springfield Armory Model 1896 Krag was made back in December of 1897. It has since been commercially converted to a .22 Caliber Training Rifle that uses a Stevens-Pope Eccentric Chambered Barrel. The Stevens-Pope conversion barrels were sold between 1901 and 1904. The U.S. Military purchased Stevens-Pope conversion barrels and used those to convert Military issue Krags to .22 Training Rifles.
This Krag was commercially converted and uses a custom side plate & sight. This is a Rare 1896 Krag .22 Training Rifle. It will add to your Krag collection.
It’s an antique so no FFL is required…unless you live in California.
For more info on the Stevens-Pope Eccentric Barrel Conversions see pages 2204 to 206 of Joe Poyer’s book, The American Krag Rifle and Carbine.