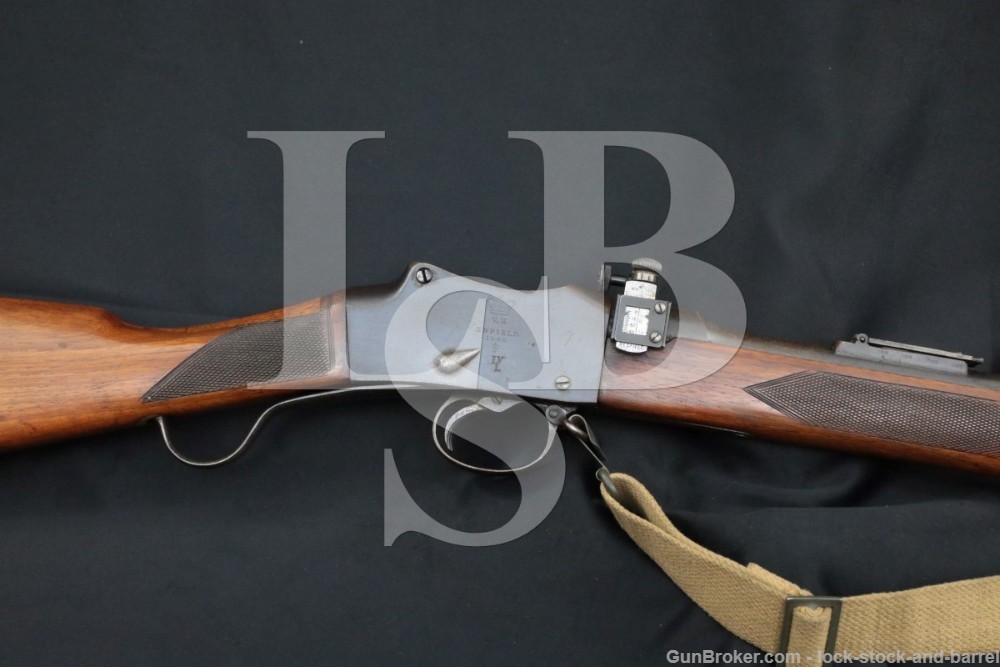 Markings: The right of the receiver is marked with crowned “V.R.”, “ENFIELD / 1886.”, a crowned broad arrow and “I.V / 1.”. The left of the receiver is marked “S.M.R.C.” above the logo for the organization, their motto “LOOK FORWARD” below and “TARGET”, “RIFLE” to each side. Below is “CONVERTED BY / THE LONDON SMALL ARMS CO LTD / FOR / THE SOCIETY OF MINIATURE RIFLE CLUBS”. The top of the barrel is marked “GUARANTEED ALL BRITISH” in front of the rear sight. The top of the knox is marked “.22″ L.R.”. The right of the buttstock has an Enfield cartouche over “1V. / 1”. There are British proof marks on the receiver, breech-block and barrel.

Sights / Optics: The front sight is a brass beaded blade dovetailed to a checkered, ramped, banded base screwed to the front of the barrel. There is a folding ladder-style sight installed at the rear of the barrel, but it is missing parts and is not currently usable. The right of the knox has been drilled and tapped with a Redfield aperture sight installed, adjustable for windage and elevation.

Stock Configuration & Condition: The stocks are two-piece checkered walnut with nosecap, two barrel bands, straight wrist, straight comb and steel buttplate. There are sling swivels in the front barrel band and the trigger guard. The belly has a patch where the previous lever socket was filled in. The forend has had the slot for a cleaning rod filled in and has had wood added to the inside to fit the smaller profile barrel. There is a patch-repair in the top of the wrist, interrupting the checkering. There are some scattered light nicks, scuffs and scratches. The checkering is generally well defined. The LOP measures 14 1/8″ from the front of the trigger to the back of the buttplate. The plate has scattered light-moderate erosion and wear. Overall, the stocks are in about Very Good condition as repaired and refinished Antique.

Finish Originality: The rifle has been refinished, but we believe the finish to be original to LSA’s conversion of the rifle.

Bore Condition: The bore is light gray with well defined rifling. There is minor erosion scattered through the bore, mostly in the grooves.

Overall Condition: This rifle retains about 60% of its current metal finish. The balance is mostly in the barrel, which shows scattered wear and light surface oxidation, the breech block and the bottom metal which are mostly worn to white with scattered discoloration from oxidation. The receiver has generally strong finish with some scattered minor oxidation. There are some scattered light nicks, scuffs, scratches and infrequent spots of light surface erosion. The screw heads are tool marked with strong slots. The markings range from clear to worn, but legible. Overall, this rifle rates in Very Good-plus condition as converted Antique.

Mechanics: The action functions correctly. There is a cocking indicator on the right receiver flat. We did not fire this rifle. As with all used firearms, a thorough cleaning may be necessary to meet your maintenance requirements.

Box, Paperwork & Accessories: This rifle comes with a web sling. The sling has “055” hand-written and a Danish stamp crown over “FKF”.

Our Assessment: The Martini-Henry served the British Empire from the 1870s to the 1890s as their primary service rifle and saw continued use into World War I. It was one of the most successful single-shot cartridge rifles which bridged the gap between percussion black-powder arms and the later cartridge repeaters. It was also the basis for a number of small-bore target rifles, with some of the most famous being produced by the Birmingham Small Arms Co. in the mid-20th Century. While those were typically purpose-built as rimfire target rifles, this example is a Martini-Henry Mark IV which has been converted by the London Small Arms Co. for the Society of Miniature Rifle Clubs, later to be named the National Small-bore Rifle Association. There were probably a few Mark IV rifles floating around at the time, it has been referred to as the pattern which “should never have been”, introduced just prior to the British moving to the .303 cartridge and eventually adopting a bolt-action rifle. The conversion of this rifle was quite painstaking, with the original forend, made for a .450 caliber barrel, having been filled in to fit the new barrel profile and a shorter lever installed, the socket for the Mark IV’s distinctive long lever being filled in. Despite the barrel being marked “GUARANTEED ALL BRITISH”, the rifle has a nice set of American target sights and, of all things, a Danish sling. This is a fascinating piece, perfect for any British rifle collection, especially one focused on Martini rifles or small bore target guns. Please see our photos and good luck!