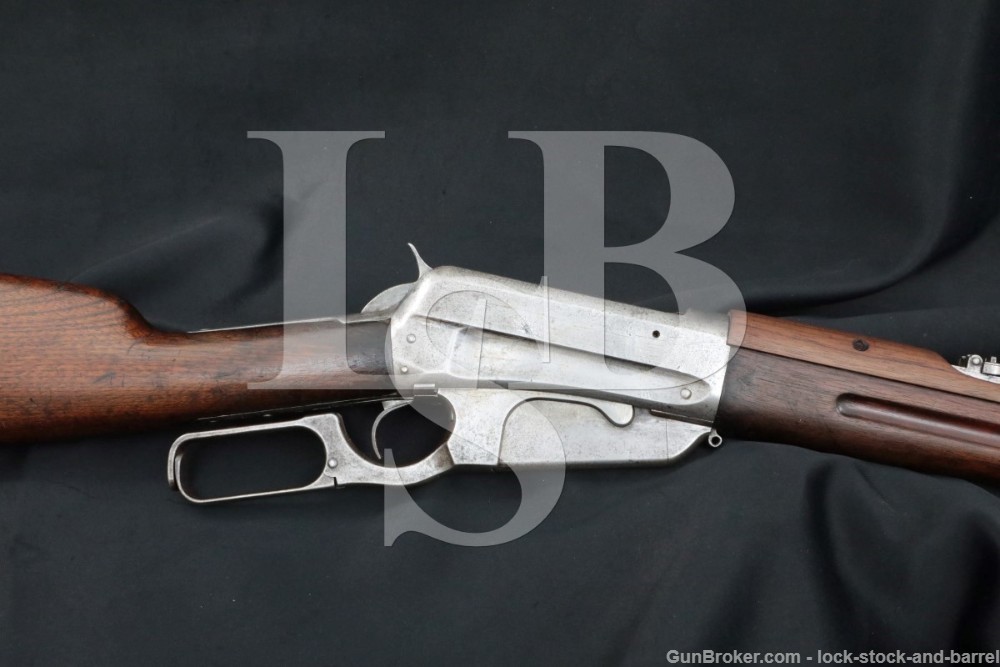 Model: 1895, Originally shipped as a Musket, the rifle is now in Saddle Ring Carbine configuration.

Barrel Length: The barrel has been cut to 22″ Round

Sights / Optics: The front sight is a beaded blade integral to a base fixed to the front of the barrel. The front sight is not original to the rifle. The rear sight is a Type 1 sliding elevator/ladder sight. When the ladder is folded down, the slider is used to control the elevation using the marks on the left side of the base “200 300 500 700”. The rear face of the slider is marked from “8” to “18”, alternating sides. There is a “U” notch on the rear face of the slider for use when the ladder is folded down. There is another “U”-notch on the slider for use when folded up, but the slider has been installed upside-down and it appears on the bottom of the slider. The slider is adjustable for windage.

Stock Configuration & Condition: The stocks are three-piece smooth walnut with spring-clip secured handguard, finger-grooved forend secured by a barrel band, straight grip, straight comb, steel carbine-style buttplate with sliding door, a sling swivel in the belly and another on the front barrel band. There is an additional sling attachment point fixed to the front of the magazine. The forend has been cut down from its original musket length. The stocks have several scattered nicks, scuffs and scratches. There are a few small losses around the edge of the top tang. There is scattered discoloration from age and oil. The handguard has been refinished and/or replaced. The LOP measures 12 5/8″ from the front of the trigger to the back of the buttplate. The plate has gone to a moderate-dark patina with scattered wear. The door is difficult to operate. Overall, the stocks are in about Very Good condition as refinished Antique.

Finish Originality: Remaining finish is Original, the barrel has been cut.

Bore Condition: The bore is gray. The rifling is sharp where not interrupted by erosion. There is scattered light erosion in the bore. There is a bulge in the bore at the front sight base. Our gauge shows an ME of about 2.0.

Overall Condition: This rifle retains about 10% of its metal finish. Strongest finish is on the bottom of the barrel in front of the forend. There are some other scattered spots of remaining finish. The other surfaces have either worn to white or gone to a mottled light patina with scattered spots of surface oxidation. There are scattered nicks, scuffs and scratches. The left of the receiver has tool marks around the top-front screw and wear around the saddle ring. The action shows operational wear. The finger lever catch is missing. There is a bulge in the bore at the front sight base. The screw heads range from sharp to tool marked with serviceable slots. The markings are clear. Overall, this rifle is in about Good condition as Antique and would rate Very Good but for the bulge.

Mechanics: The finger lever catch is missing. There is a bulge in the bore at the front sight base. Otherwise, the action functions correctly. The hammer has a half-cock safety. The trigger is crisp. We did not fire this rifle. As with all used firearms, a thorough cleaning may be necessary to meet your maintenance standards.

Our Assessment: The 1895 Winchester was the first lever action model to incorporate a non-detachable box magazine. This is the model Teddy Roosevelt called his “Big Medicine” that he used in hunting here and in Africa. With its quick handling characteristics, box magazine and spitzer bullet capability, the Model 1895 changed the world of sporting rifles forever. The 1895 was used by major powers worldwide, with Russia alone purchasing nearly 300,000 1895’s to supplement their own arms production during World War I. In 1898, the United States ordered 10,000 of the rifles in musket form with handguard for use in the Spanish-American War, but the war ended before they could be delivered. One hundred were issued for field testing in the Philippines and the remaining 9,900 were sold to M. Harley Company. Many of these were shipped to the new Cuban government in 1906 and some found their way to Pancho Villa’s troops in Mexico. The U.S. Government also ordered carbines, but we can’t find records as to how many. This 1895 Saddle Ring Carbine was made in 1898 and was originally a Musket configuration which has had the barrel and forend cut down to Carbine configuratoin. The rifle is chambered in .30-40 Krag. The chamber ring is marked “U.S”, but we were not able to find any definitive documentation of shipment to the US Army. In any case, it is a nice example of the 1895, showing honest wear, though there is a bulge in the bore near the muzzle. This should make a nice addition to a collection of Winchester lever-action rifles. Please see our photos and good luck!