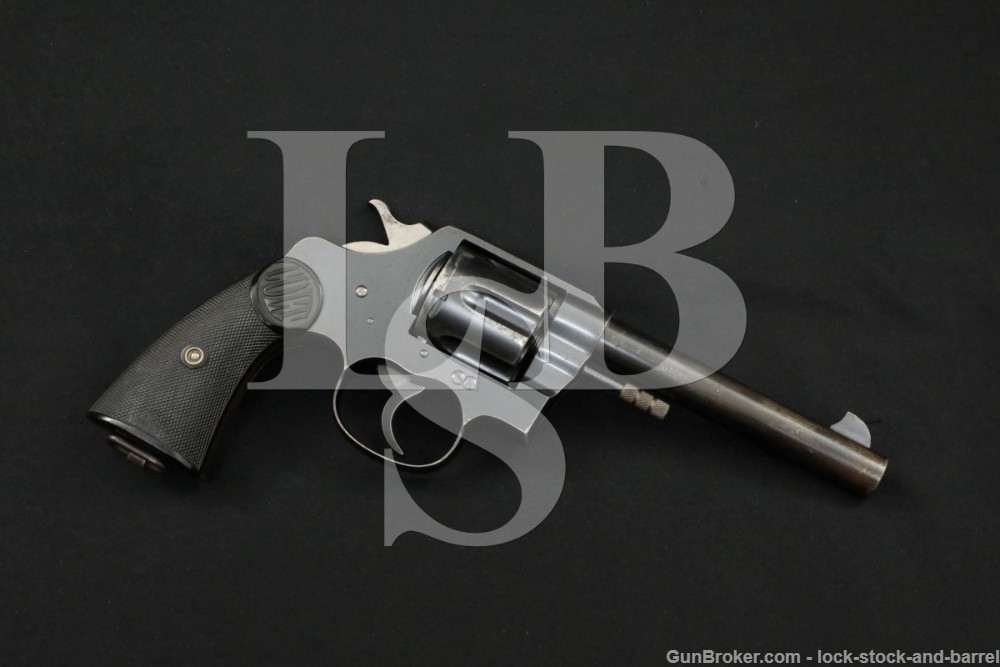 Markings:  The left side of the barrel is marked “NEW SERVICE .45* ELEY”.  The top of the barrel is marked “COLT’S PT FA. MFG CO HARTFORD CT USA. / PAT’D AUG 5 1884 JUNE 5 1900 JULY 4 1905″. A series of British proof marks and inspection stamps dot the right side of the barrel, which is also marked “.45” for .45 Webley. The left front of the trigger guard is marked with a “VP” in a triangle. The crane and crane-cut are each marked with the serial number, “114504”. There is a marking along the backstrap that reads “J.W. Ings R.E.” in a cursive script. Please see our assessment below for more information.

Sights/Optics: The front sight is a tapered shark-fin blade fixed to the front of the barrel. The rear sight is a long groove in the top strap.

Stock Configuration and Condition: The grips are two-piece checkered black hard rubber with “COLT” in oval at their tops. The smooth edges have intermittent light nicks and compressions, most notably at the top of the left panel. The checkering is well-defined. Overall, the grips rate in Good-to-Very Good condition.

Bore Condition: The bore is mostly bright and the rifling is sharp. There is no erosion in the bore, but spots of minor stubborn fouling can be seen.

Overall Condition: This handgun retains about 77% of its metal finish. The barrel has several spots of moderate finish loss along with clusters of light surface erosion. The frame has light-to-moderate thinning on most edges, the worst instances being on the topstrap. The cylinder has moderate thinning on all edges as well as a turn line through the finish. The screws and pins have minor tool marks with strong slots. All markings are clear. Overall, this revolver rates in Very Good condition.

Mechanics: The action functions correctly. The cylinder locks up with no play when the trigger is depressed. The double action trigger is smooth, the single action is crisp. We did not fire this revolver. As with all used firearms, a thorough cleaning may be necessary to meet your maintenance requirements.

Our Assessment: “Colt’s New Service Revolver was for many years one of the biggest, most powerful revolvers available to sportsmen, law enforcement and the military. They were made from 1898 to WW2—some sources state 1897 to 1943—and chambered for a wide variety of calibers during its long production run. The New Service was a large, heavy, double action, swing out cylinder revolver and most were manufactured with barrel lengths from 4” to 7.5” with fixed sights. While originally chambered for .455 Eley, this revolver was at some point reamed for .45 Webley, though it is marked .45 Eley. We were able to chamber .45 Webley round easily, and it may just be a matter of Colt not wanting the competition’s name on their revolver. Most interestingly is the marking along the backstrap, “J.W. Ings R.E.”. Information at this link tells of a young British soldier and member of the Royal Engineers, John Walter Ings, who was killed in action at the age of 20. It is entirely possible, though we can not confirm, that this was his sidearm. It is in overall Very Good condition with much of its original finish, and a great bore. Good luck and happy bidding!