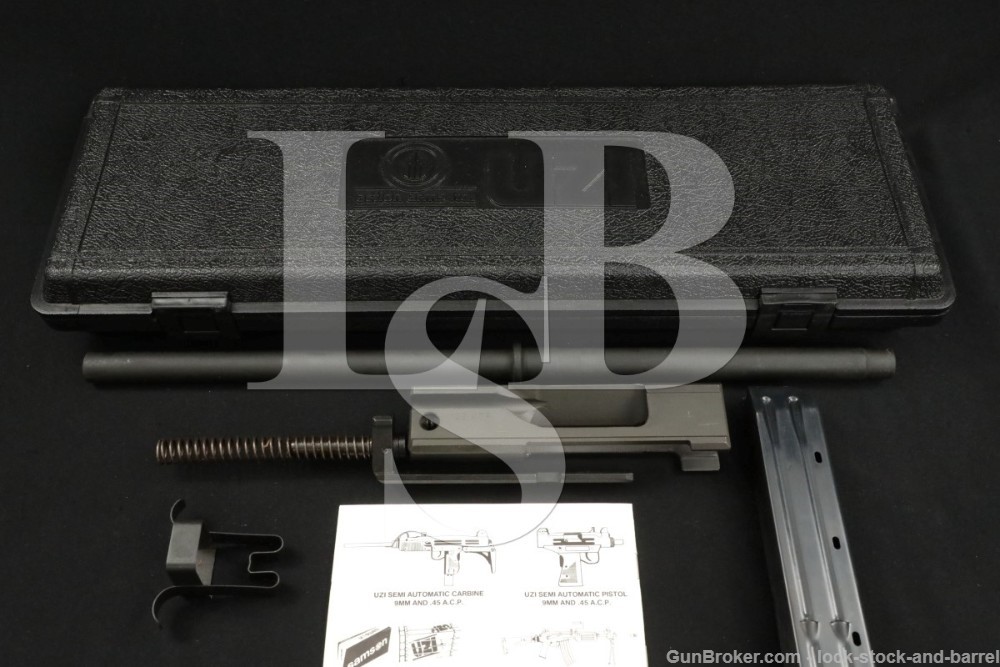 Action Type: Conversion kit for the semi-automatic Uzi carbine so that it can take .45 ACP rounds.

Overall Condition: The Conversion kit retains about 93% of its metal finish. There is mild handling wear on the components including small scratches and nicks. Notably, the barrel  has a few small patches of finish loss. The markings remain clear. The screwheads remain serviceable. Overall, the kit is in Very Good Plus condition.

Mechanics: The action functions correctly. We did not fire an Uzi carbine with this conversion kit installed. As with all previously owned firearms, a thorough cleaning may be necessary to meet your maintenance standards.

Our Assessment: This IMI Uzi carbine conversion kit will allow a user to fire .45 ACP rounds from an Uzi carbine. The Uzi was the brainchild of Israeli IDF officer Uziel “Uzi” Gal who invented the gun in 1948. Gal did not want his brainchild to be named after him but the Israeli government did so anyway.  Following his military career, Gal would remain a firearm designer for the remainder of his life, eventually settling in the US. The Uzi entered service in the IDF beginning in the 1950s and in the 1960s it began to be exported around the world. It was the most widely proliferated submachine gun by the 1980s. This submachine gun had a number of conversion kits produced to meet American civilian market firearms regulations, but they were all restricted by the first Bush administration’s 1989 assault gun ban. If you want to upgrade your Uzi than this kit is perfect. It features a bolt, barrel and magazine designed to handle .45 ACP rounds. The kit also comes with a 16-round magazine and magazine-loader. This is a rare item you do not want to miss out on!