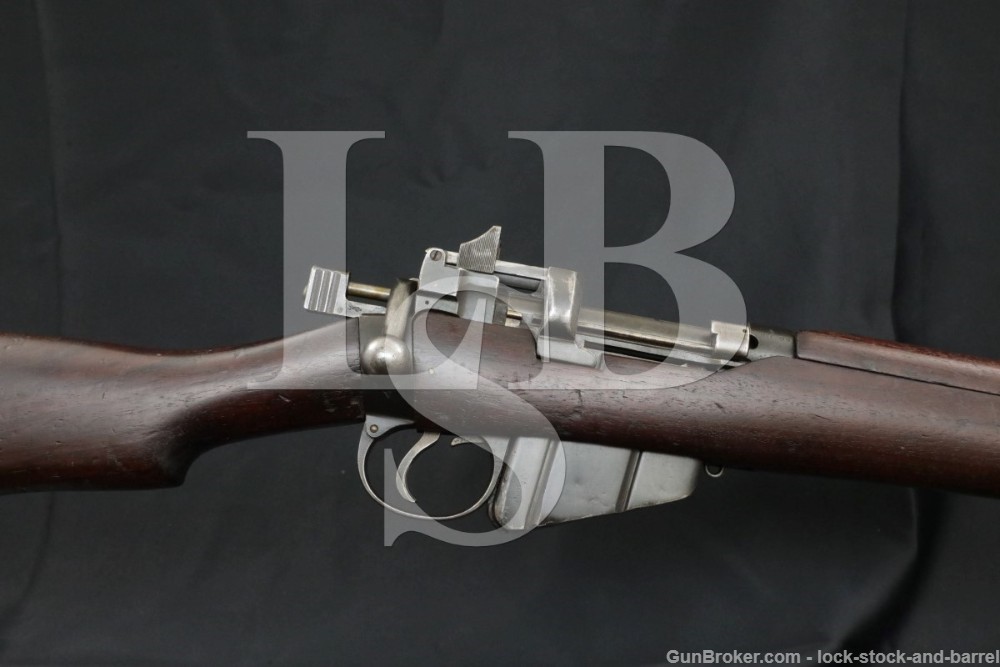 Markings: There is no visible import mark. The right side of the stock collar is marked “crown / G R” (George Rex) / ENFIELD / 1924 / SHTLE / V”. The safety is marked “V”. The British export mark on the barrel shank reads “.303 2.222 inch / 18.5 TONS PER square inch” (the rifle fires a .303 projectile, the case max overall length was 2.222 inches and it was pressure tested to 18.5 to tons). The top of the receiver is marked with a London “crown / CP” proof.  The right side of the receiver, rear of the bolt handle, face of the nosecap, and front of the forearm are each marked with the serial number. The front of the receiver, rear of the receiver, and the barrel shank are marked with several British proofs & inspection stamps including “crowned” marks and a “crown / GR / crossed flags / P” proof. The bolt handle and bolt head are marked with “crossed flags”. The bottom of the grip is marked “12”, “crown / W”, and “21”. There are a few other small markings on the rifle.

Sights / Optics: The front sight is a bladed post set between 2 protective ears. The rear of the sight is an aperture when down. It flips up to become a  sight ladder that uses a sliding aperture. The sides of the sight ladder are marked from “2-20”.

Stock Configuration & Condition: The hardwood stock has a straight grip with finger groove, barrel band, nosecap assembly with sight wings & bayonet lug, 2 barrel bands, stacking loop, 2 sling loops, and a brass buttplate with hinged door for storage. The buttplate shows several scratches & small dents as well as oxidation. The barrel bands show scrapes & thinning. The wood shows numerous scrapes, scratches, and compression marks. Several have damaged small portions of the surface wood. Most of these marks have been oiled over. The LOP measures 13 ½ inches from the front of the trigger to the back of the buttplate. The stock rates in about Very Good overall condition.

Bore Condition: The muzzle and grooves are light grey. The rifling is deep. There is fouling and light erosion in the grooves and at the muzzle. The fouling should clean up some.

Overall Condition: This rifle retains about 90% of its current metal finish. The metal shows scrapes, small scratches, light discoloration, and thinning on the leading edges of the metal. The markings are well defined. Overall, this rifle rates in about Very Good condition.

Box, Paperwork & Accessories: The rifle comes with a 10 round magazine. It shows scrapes, small scratches, areas of discoloration, and a shallow dent on the bottom. Overall it is in about Very Good condition. A metal oiler and pull through thong (no metal end weight) are stored in the butt. The oiler shows discoloration, scrapes, and soiling. Overall the thong & oiler are in about Very Good condition.

Our Assessment: This SHT LE No1 MkV (Short Magazine Lee-Enfield Number 1 Mark 5) was made by Enfiled back in 1924 as a Trails Rifle. The Mark V is equipped with a receiver mounted aperture sight which allows for a longer sight radius than the previous barrel-mounted rear sights. The Mark V was not officially adopted so Mark V rifles are quite scarce. This Mark V is in Very Good original condition with matching part numbers on the receiver, bolt, nosecap and stock. It would be a great addition to your Enfield or Military rifle collection.