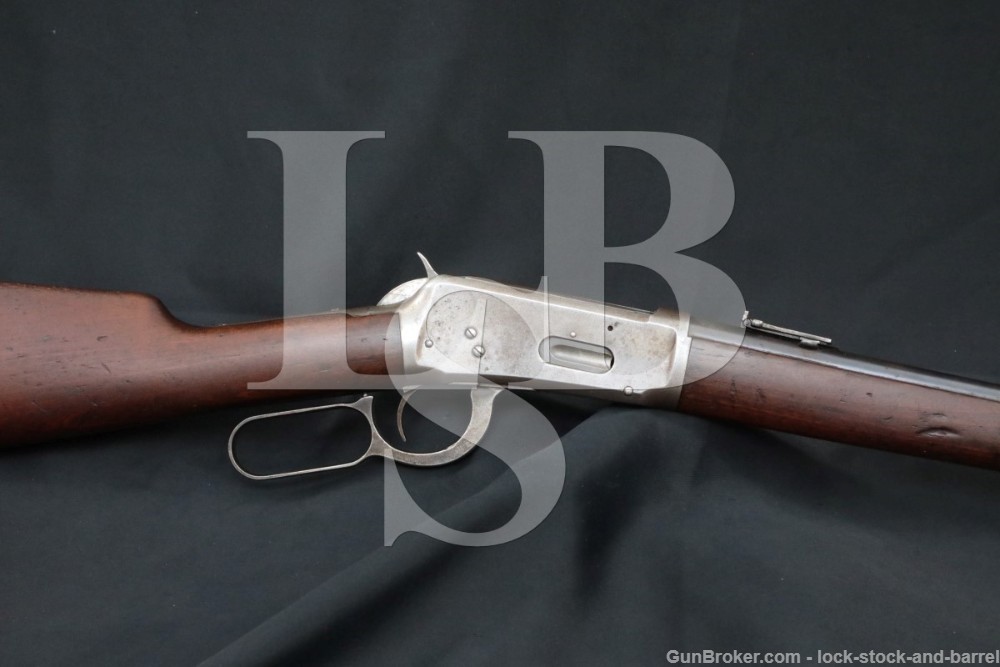 Action Type: This rifle has a lever action with a full length tubular magazine.

Markings: The left of the barrel is marked “MANUFACTURED BY THE WINCHESTER REPEATING ARMS CO. / NEW HAVEN, CONN. U.S.A. PATENTED AUGUST 21 1894.”, “-NICKEL STEEL BARREL- / ESPECIALLY FOR SMOKELESS POWDER” and “30 W.C.F.”. The upper tang is marked “MODEL 1894 / -WINCHESTER- / TRADE MARK REG. U.S. PAT. OFF. & FGN.”. The top of the barrel at the receiver and the receiver are marked with a circled “WP” proof. The underside of the receiver is marked “744878”. The top-rear of the barrel has a Dominion of Canada “DC / P” on crossed pennant proof mark. The left of the buttstock has three stamped characters, but we can’t quite make out what they are. There are small stampings on the bottom tang at the lever safety, but we also cannot make out what they are.

Sights / Optics: The front sight is a blade pinned to a slotted base fixed to the front of the barrel. There is some paint residue on the front sight assembly and it appears that the blade has been soldered into the base. The rear sight is a folding ladder-style sight presenting a “V”-notch when folded down and with a “V”-notched slider on the ladder, visible when folded up. The ladder is graduated from 0-20 in hundreds of yards. The top tang is drilled, tapped and filled to accept a peep sight (none included).

Stock Configuration & Condition: The stocks are 2-piece smooth walnut with banded forend, a straight grip, and carbine-style steel buttplate. The stocks have moderate wear, heavier at the left-rear of the forend and toward the rear of the buttstock. There are scattered nicks, dings, scrapes and scratches with a more notable ding on the right of the forend. There are no chips or cracks. The buttstock has minor play to the receiver. The LOP measures 13″ from the front of the trigger to the back of the buttplate. The plate has gone to a light patina with scattered light nicks and scratches. Overall, the stocks are in about Good condition.

Bore Condition: The bore is mostly bright with sharp rifling. There is infrequent minor erosion in the bore, most toward the muzzle-end. Our gauge shows an ME of about 1.5.

Overall Condition: This rifle retains about 50% of its metal finish. The finish is thinning at all edges. The receiver has mostly worn to white with scattered light discoloration from oxidation and a few light marks. The barrel and magazine have the remaining finish, showing scattered finish wear, nicks, scuffs, scratches and some minor surface oxidation. The action shows operational wear. The screw heads range from sharp to tool marked with strong slots. The Winchester factory and Canadian proof markings are clear, the stock marking and the marking on the bottom tang are not legible. Overall, this rifle is in Good-Very Good condition.

Mechanics: The action functions correctly. The hammer has a half-cock safety. The rifle is equipped with a lever safety, which is operational. The lever lock-up is tight and the trigger is crisp. We did not fire this rifle. As with all used firearms, a thorough cleaning may be necessary to meet your maintenance standards.

Box, Paperwork & Accessories: None. Please note, the mount for a saddle ring is present, but the ring is missing.

Our Assessment: This is a Winchester Model 1894 Saddle Ring Carbine, made in 1915 with a 20” round barrel chambered in .30-30 Win. The 30-30 Win. has likely taken more deer in America than any other cartridge except maybe .30-06 and the model 1894, or simply 94 as it is now known, is one of the most popular rifles ever chambered for the round. This rifle took a different path, being one of either 5,000 or 7,000 (sources differ) Model 1894 carbines which were ordered by the British and inspected by the Dominion of Canada during the Great War. Most of these carbines would be issued to Torpedo Boat destroyers and miscellaneous craft including the intriguing “Q” ships. It still retains a nice bore and strong mechanics with about 50% of its original blue finish. This would make a great addition to a Winchester collection due to its wartime connections, but certainly would also still serve well as a deer rifle. Please see our photos and good luck!