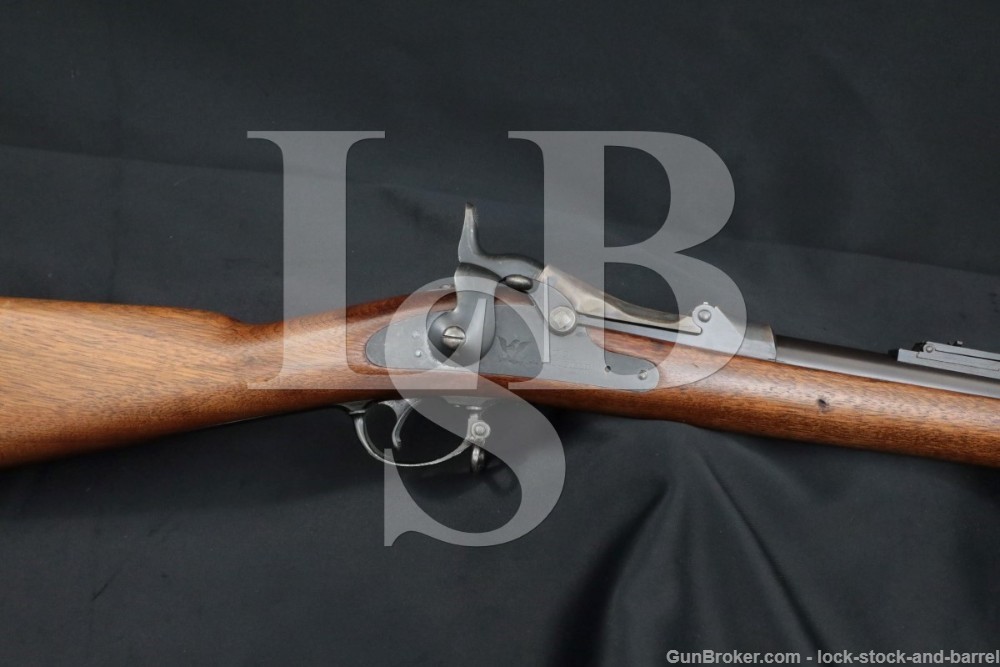 Sights/Optics: The front sight is a blade pinned to a rectangular base set on the barrel. The rear sight is a Model 1884 Buffington version marked “5-20” on the left, “2-14” on the right, and “R” at the top screwed into the barrel.

Stock Configuration and Condition: The stock is a refinished one-piece walnut with a smooth straight grip. The forend is nearly as long as the barrel, with a blued steel nose cap. The forend is held with two steel barrel bands. There is a sling swivel at the front of the trigger guard and a sling swivel and stacking swivel on the bottom of the front barrel band. There are scattered minor nicks and compressions most notable on the comb. The LOP measures 13 1/4” from the front of the trigger to the back of the buttplate. The plate has moderate thinning at the heel and toe. Overall, the stock rates in Very Good-to-Fine condition, as antique refinished.

Bore Condition: The bore is quite bright with well-defined rifling. There is no erosion, but there is a bit of light stubborn fouling in spots.

Overall Condition: This rifle retains about 90% of its current metal finish. There is some minor thinning at the barrel tip. The barrel has intermittent minor nicks and scuffs most notable on the forward areas of the barrel. The screw heads are lightly tool marked with strong slots. The markings are clear. Overall, this rifle rates in Fine condition, as antique refinished.

Our Assessment: The Model 1873 “Trapdoor” Springfield was the first standard-issue breech-loading rifle adopted by the United States Army and was one of the main service rifles of the U.S. Military until it was gradually replaced by the Springfield Model 1892 bolt-action rifle. George Custer’s troops were armed with them at the Battle of the Little Bighorn, and they were still used by secondary units during the Spanish-American war in 1898. This rifle is a Model 1884 produced in 1887, according to serial records. The cartouche on the side reads 1889. This Trapdoor has been lovingly restored and is a pleasure to look at. Blued surfaces are rich, and the case color is still quite strong. Original wood has been refinished but still retains its markings. This antique rifle is in Fine condition and will hold a prized place in any antique firearms collection. Good luck, and happy bidding!