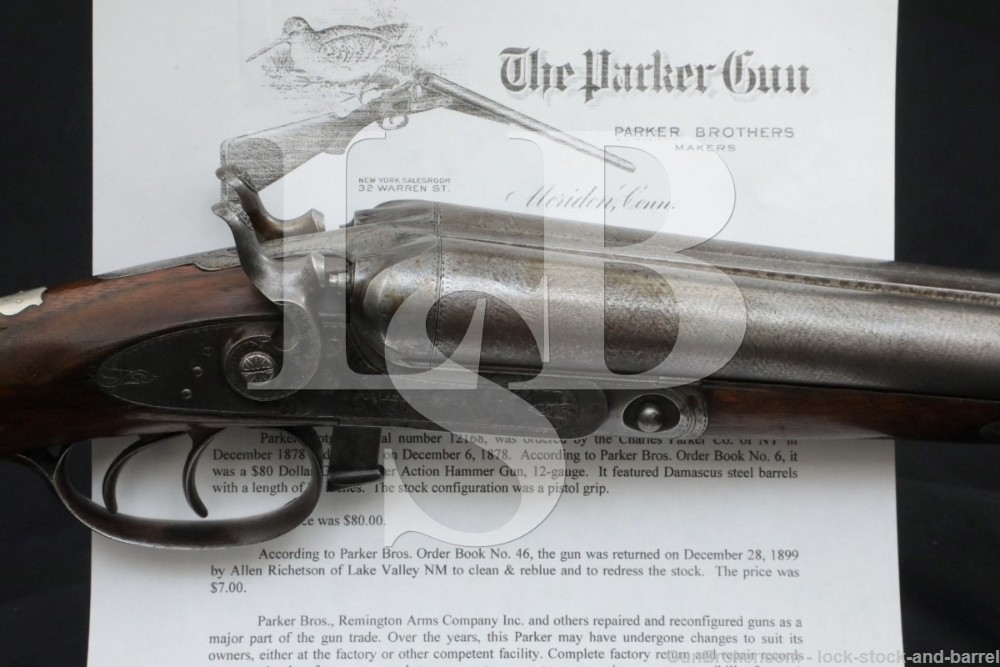 Action Type: Side by Side, Lifter-Opened, External Hammer, Double Trigger Shotgun with Extractor

Sights / Optics: There is a silver-colored bead at the front of the rib.

Stock Configuration & Condition: The stocks are two-piece checkered walnut with splinter forend, pistol grip, straight comb and smooth steel buttplate. The forend is secured with a wedge and has a triangular inlaid steel tip. There is a shield-shaped silver-colored thumbplate on the top of the wrist. The stocks have some scattered nicks, scuffs and scratches. The forend has a small loss on the front, to the left of the steel tip. There are thin cracks at the rear of each sideplate and the rear of the top tang. There are a series of grain-line surface cracks on the right of the buttstock starting near the heel and progressing down and forward to the belly. There is a repaired chip-loss at the toe. The checkering is generally sharp and has been re-cut. It is not clear if the checkering was re-cut when the gun was returned to the factory in 1899, it may have been re-cut since. The drop at comb is approximately 1 7/8″, drop at heel 2 5/8″. The cast is about neutral. LOP measures 14 1/4″ and 13 3/8″ from the fronts of the triggers to the back of the buttplate. The plate has worn to white, showing some nicks, scratches and minor surface oxidation. Overall, the stocks are in about Good-Very Good condition as refinished Antique.

Finish Originality: According to the included Parker Gun Collectors Association letter, this gun was refinished at the Parker factory in 1899. We do not see signs of any refinishing since.

Bore Condition: The bores are light gray with some scattered light erosion and infrequent minor pitting. The left barrel has dents visible in the bore about 2″ and 17″ from the muzzle on the side.

Overall Condition: This shotgun retains about 25% of its metal finish. The barrels have good damascus patterning along their bottoms, especially strong under the forend with the sides and tops showing more finish wear and scattered surface erosion. The receiver’s case color is mostly muted or worn to white with some color remaining on the water table and around the triggers. There is some surface erosion on and around the right sideplate and hammer. There are some scattered light nicks, scuffs and scratches. The screw heads range from sharp to tool marked with strong slots. The markings are generally clear, the Parker Bros. marking on the right sideplate is partially obscured by erosion. Overall, this shotgun is in Very Good condition as Antique.

Mechanics: The action functions correctly. The barrels lock up to the receiver with no play. The shotgun features dual triggers and an extractor. The action is opened using a lifter on the bottom of the receiver in front of the guard. We have not fired this shotgun. As with all used firearms, a thorough cleaning may be necessary to meet your maintenance standards.

Box, Paperwork & Accessories: This shotgun comes with a Parker Gun Collectors Association letter which confirms that this gun was ordered by the Charles Parker Co. of NY in December 1878 and shipped December 6, 1878 as an $80 Grade, Lifter Action Hammer Gun, 12-gauge with 30″ damascus steel barrels and a pistol grip stock. The letter further notes that Parker records indicate the gun was returned in December, 1899 for cleaning, reblue and stock refurbishment.

Our Assessment: This Parker Brothers Under-Lifter Hammer gun comes to us from all the way back in 1878, quite early in the company’s storied history. The earliest guns had an interesting mechanism with a release lifter on the bottom of the receiver paired with exposed hammers and damascus steel barrels. This gun’s barrels make it a nice find for the discerning Parker collector. While most of the damascus barrel tubes used by Parker were made in Belgium or England, there was a brief period from about 1877 to 1879 when Parker Bros. experimented with making their own damascus or “laminated” steel barrels. They have a distinctive appearance, called “Herringbone”, “Lutticher” or “Toncin”. For a gun coming up on 150 years old, this example is in surprisingly good shape. The gun shows some honest wear, with a pair of dents in the right barrel being the most notable defects. The overall condition of the gun, its early production and its scarce Parker-made barrels would make it a great addition to any collection, especially an avid Parker collector. Please see our photos and good luck!