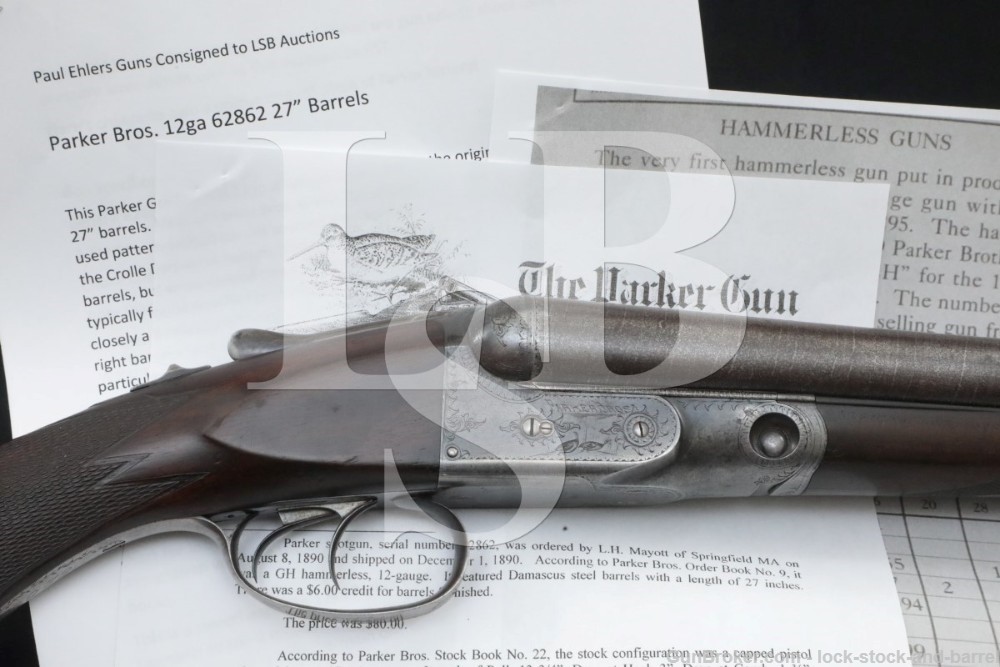 Stock Configuration & Condition: The stocks are two-piece checkered walnut with splinter forend, capped pistol grip, initial plate inlaid to the belly, straight comb and checkered black hard rubber Parker Bros buttplate with Dog scene. The forend has an inlaid steel tip. The stocks have some scattered light nicks, scuffs and scratches, most in the buttstock. There is a dark spot to the right of the top tang in the top of the wrist which may be a fill. Otherwise, there are no chips or cracks. The checkering is well defined. The drop at comb is approximately 1 3/4″, drop at heel 2 3/4″. The cast is about neutral. LOP measures 13 1/4″ and 12 3/8″ from the fronts of the triggers to the back of the buttplate. The LOP recorded in the included PGCA letter indicates that approximately 1/4″ has been cut from the buttstock and the tiny border on the buttplate indicates that it was re-fit to the stock after the cut. The plate has light wear, mostly at the heel and toe, a scratch on the dog, with otherwise good detail in the dog and generally well defined checkering. Overall, the stocks are in about Fine condition as factory refurbished.

Finish Originality: According to the included Parker Gun Collectors Association letter, this shotgun was returned to the factory in 1900 for re-brown, re-blue and general refurbishment. We see no signs of refinishing since being factory refurbished.

Bore Condition: The bores are semi-bright with some scattered light erosion and infrequent minor pitting.

The consignor provided minimum barrel wall thickness measurements. We have not measured the wall thickness and these figures should be confirmed prior to firing: Left- 0.031″, Right- 0.028″

Overall Condition: This shotgun retains about 70% of its metal finish. The barrels have strong damascus patterning with some light wear at the muzzles, a few scattered light nicks and scratches, and a few spots of minor erosion. The exposed portions of the receiver have mostly muted with some strong case color around the triggers, under the lever and on the water table. The receiver has a few minor marks, one more notable nick on the trigger plate just in front of the fowl scene, and some minor discoloration from oxidation. The action has operational wear. The screw heads range from sharp to tool marked with strong slots. The markings are clear. Overall, this shotgun is in Fine condition as factory refurbished Antique.

Box, Paperwork & Accessories: This shotgun comes with a Parker Gun Collectors Association letter which confirms that this shotgun was ordered by L.H. Mayott of Springfield, MA on August 8, 1890 and shipped December 1, 1890 as a GH Hammerless 12 GA with 27″ Damascus barrels. The original stock configuration was a pistol grip, 13 3/4″ LOP, 3″ drop at heel, 1 3/4″ drop at comb and a weight of 7 pounds.

Our Assessment: This Parker Brothers GH Grade Hammerless comes to us from 1890. The GH Grade filled a gap between the lower grade or “knockabout” guns and the higher grade or “fine” guns, offering a finer quality fit and finish, engraving and style in a gun which could still be taken to the field without feeling like you’re ruining a presentation piece. This example is pretty special though, as it has some interesting, if not unique features. The gun has exceptionally scarce 27″ barrels, one of the least common barrel lengths for Grade 2 guns, with only 34 made and only 24 in 12 gauge. According to the included PGCA letter, Parker records note that “There was a $6.00 credit for barrels furnished”, which accounts for the damascus pattern of the barrels not matching any other Parker we have seen. It seems that the original purchaser provided the Birmingham proofed barrel tubes to Parker for his gun. The gun was returned to the factory almost exactly 10 years after it shipped to have dents removed, cleaning, refinishing and refurbishment of the stocks. The only notable deviation from its factory configuration is that the buttstock has been shortened by about 1/2″ with the buttplate fit to the new stock profile. According to the consignor, this gun was inspected by Brad Bachelder of Bachelder Master Gunmakers who speculated about the grip cap, which is not of any pattern we have seen on other Parker guns. Mr. Bachelder found the gun sound mechanically when he inspected the gun, but it wouldn’t hurt to double-check before firing. It ought to make for a great bird gun, it’s lightweight, fast-handling and with IC choked bores it will be good where closer shots on fast-moving birds are expected. It is also a scarce, dare we say unique configuration which will add to even an advanced Parker collection. Please see our photos and good luck!