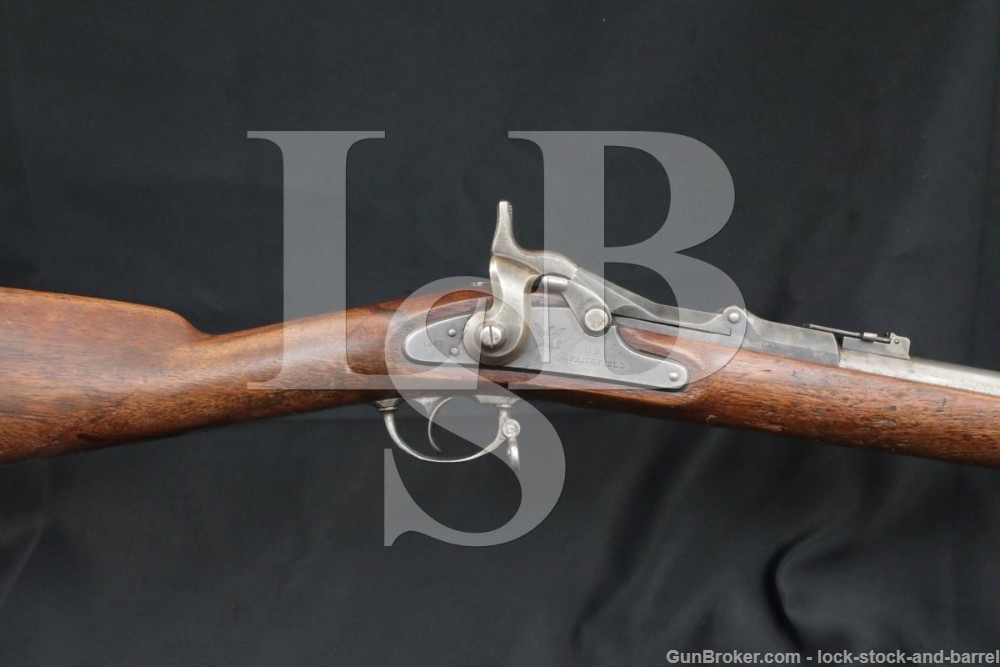 Sights/Optics: The front sight is a blade pinned to a rectangular base set on the barrel. The rear sight is a flip up v-notch when in the down position. When flipped up, it is in a u-notch range-finding configuration.

Stock Configuration and Condition: The stock is a one-piece smooth wood with straight grip, straight comb, and sheet steel buttplate. There are two barrel bands and two through bolts. There is a channel in the stock for the included ramrod. There are sling swivels on the trigger guard and forward barrel band. The stock has scattered light nicks and dings scattered about along with a few dark spots and scuffs near the buttplate on the right side. There is a larger dark compression on the left side of the buttstock. The LOP measures 13 1/4” from the front of the trigger to the back of the buttplate. The plate has gone to a light patina. Overall, the stock rates in Good condition.

Bore Condition: The bore is semi-bright with well-defined rifling. There is some minor erosion scattered throughout.

Overall Condition: This rifle retains about 0% of its original case  color. The rifle is otherwise finished bright. The hammer, breech-block, and receiver have all gone to a light patina. There is very little indication of the case color swirl. The barrel, barrel band, and forend cap all have light-to-moderate spots of surface oxidation, the worst of which is at the front of the barrel and below the rear sight. The screw heads are lightly tool marked with usable slots. The markings are fairly clear. Overall, this rifle is in Good condition, as refinished.

Our Assessment: The Springfield model 1868 is a precursor to the more definitive Springfield 1873 produced for the army beginning in 1869. They were older muskets converted to cartridge firing rifles, and went from .58 caliber to .50 caliber. At first, the barrels were re-lined, but often that lining would separate after firing, and in the end the barrels were replaced entirely, and that is the case with this example. It is marked on the breech block with the manufacturing year of 1869. The 1868 holds a fascinating place in the history of Army rifles as it effectively served as the bridge between the old weapons of war and the new. This is a neat piece for the Trapdoor completist. Good luck and happy bidding!