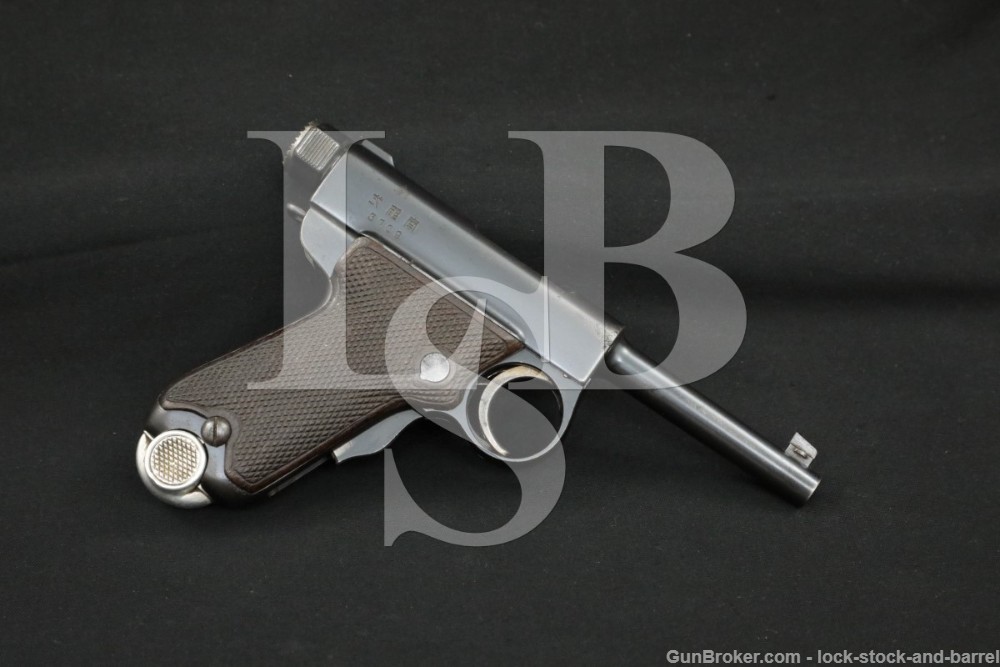 Markings: The right side of the frame is marked with the Japanese symbols for “Nambu” and “Type”, as read from right to left, over the serial number “3709”. The top of the chamber ring is marked with the stacked cannonball symbol for the Tokyo Arsenal in Koishikawa. The rear of the bolt lock/striker guide is knurled to resemble a chrysanthemum. The full serial number “3709” is marked on the right of the frame, the bottom-rear of the bolt, the bottom of the front lug of the barrel assembly, the left of the locking block, the striker spring guide, the bottom-rear of the magazine body, and the inside of each grip panel. The last three digits “709” are marked on the magazine release, the front face of the cocking knob, the recoil spring guide, the trigger guard assembly, and the ejector. There is a small Japanese character stamped in the center of the front strap slot below the grip safety and another on the bottom of the front strap.

Stock Configuration & Condition: The grips are two-piece checkered wood with smooth borders. The grips have minor handling wear with a few light nicks and compressed checkers. The checkering is well defined, generally sharp. There are no chips or cracks. Overall, the grips are in Fine condition.

Bore Condition: The bore is mostly bright with well defined rifling. There is some scattered minor erosion in the bore.

Overall Condition: This handgun retains about 92% of its metal finish. The finish is thinning at some edges. There is some light handling wear and minor oxidation in the grip areas. There are some scattered spots of minor erosion, most notable at the front and rear of the recoil spring housing on the left of the frame and the right-front of the frame at the barrel. The action shows light operational wear. The screw heads are lightly tool marked with strong slots. The markings are clear. Overall, this handgun rates in about Fine condition.

Box, Paperwork & Accessories: This pistol comes with a single 7-round magazine with an aluminum floorplate. The rear surface is marked “3709” at the bottom. The magazine has light operational wear, a few spots of light oxidation, intact feed lips and a strong spring, in Very Good-Fine condition.

Our Assessment: The Nambu Type B pistol, generally referred to in the West as the “Baby Nambu”, was a three-quarter sized scaled-down version of the Model 1902 (“Grandpa Nambu”). Very limited production started in 1903 with full-scale production beginning in 1909. Production continued through 1921 to 1923 (records from this period are incomplete), with all production moving to the Tokyo Gas Electric Company to free up production capacity for the modified 1902 “Papa” Nambu. The “Baby” Nambu were never adopted by any branch of the armed forces but were sold to officers through officer stores. Sales, and thus production, were limited due to the pistol’s high cost when compared to comparable import pistols which tended to not only be less expensive, but also of higher quality. This example is in quite good condition, retaining the great majority of its original finish, a decent bore, and all-matching serialized parts, including its magazine! With approximately 6,500 pistols made between the Tokyo Artillery Arsenal and TGE, this pistol is perfect for a collector of Japanese firearms. It would look great along-side its “Grandpa”, “Papa”, Type 14 and Type 94 cousins. Please see our photos and good luck!