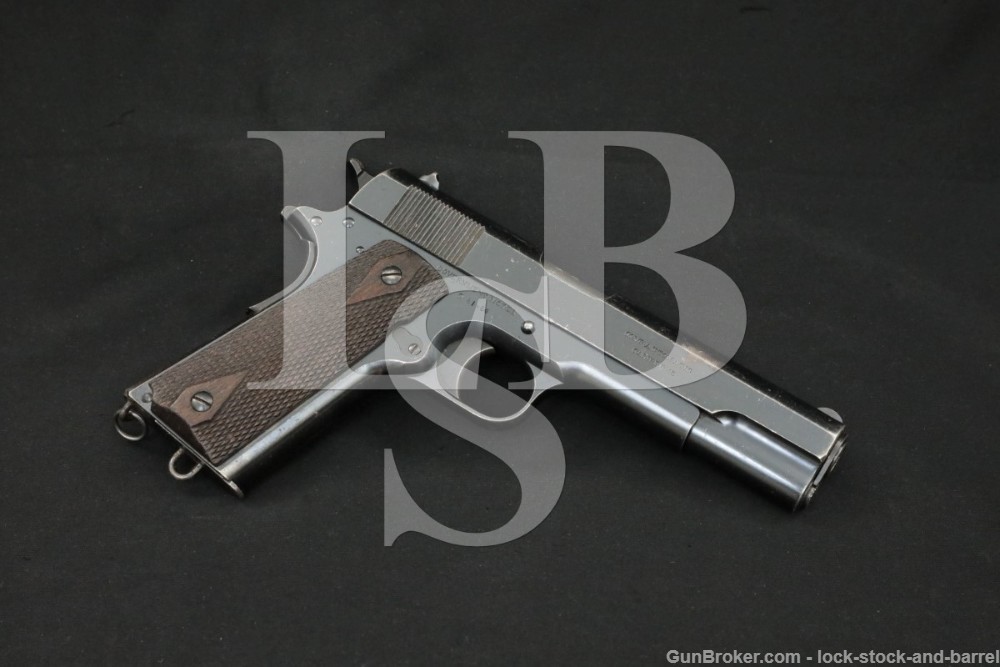 Stock Configuration & Condition: The grips are two-piece checkered walnut with smooth diamonds around the grip screws. The grips have some scattered nicks, scuffs and scratches. There are some light tool marks around the screw heads. There are no chips or cracks. The checkering is generally well defined. Overall, the grips are in Very Good condition.

Bore Condition: The bore is mostly bright with sharp rifling. There is no erosion in the bore but there is some stubborn fouling.

Overall Condition: This pistol retains about 85% of its metal finish. The finish is thinning at most edges. There are several scattered light nicks, scuffs and scratches, a couple of scrapes, and there is a spot of finish wear on the right of the slide in front of the ejector which shows discoloration from oxidation. There is some handling wear in the grip areas, most notable on the mainspring housing. The action shows operational wear. The screw heads are tool marked with strong slots. The markings are clear. Overall, this pistol is in Very Good condition.

Mechanics: The action functions correctly. The trigger pull is crisp and the slide has very little play to the frame. We have not fired this pistol. As with all used firearms, a thorough cleaning may be necessary to meet your maintenance standards.

Box, Paperwork & Accessories: This pistol comes with one two-tone 7-round magazine with lanyard-ring floorplate. The magazine has operational wear, intact feed lips and a strong spring, in about Very Good condition.

Our Assessment: The 1911 and 1911-A1 pistols served the military of the United States from 1911 to 1985, through two World Wars and the Korean and Vietnam wars. They gained a reputation as a reliable handgun with plenty of stopping power, and are held in high regard by those who have used them. The value of Colt’s new pistol was not lost on those outside America, and many were purchased by British officers during WWI, as they were expected to provide their own sidearms. This is a fairly early Colt Model 1911 Government Model made in 1915 which has British proof marks and has been inscribed “J.F. Crean / Lancs Hussars”, which appears to correspond to a Captain John Fitzgerald Crean of the Lancashire Hussars (https://www.cwgc.org/find-records/find-war-dead/casualty-details/370897/%20CREAN/). All of the old 1911 Colts are collectable, but this one which was inscribed for a British officer during the Great War will take a prized place in even advanced collections. Please see our pictures and good luck in your bidding!