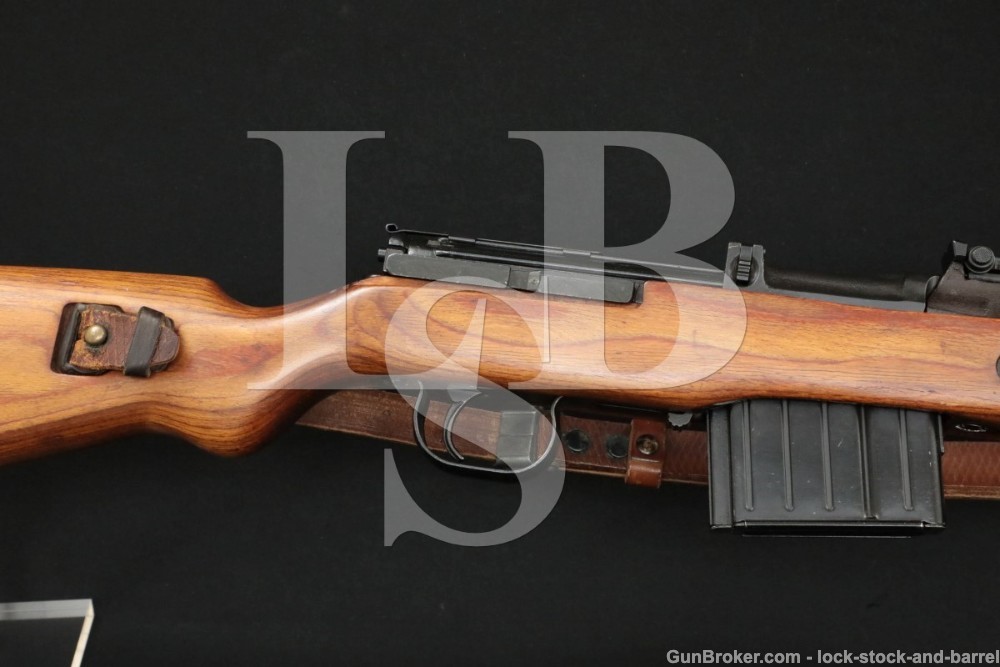 Sights / Optics: The front sight is a tall bladed post set atop a ramped base and under a removable protective hood. The rear sight is a “V” notched sliding escalator marked from “1-12”. The right side of the receiver has integral rail for an optic.

Stock Configuration & Condition: The two piece laminate stock has a pistol grip, metal nosecap with sling bar, hole for the included cleaning rod, ventilated handguard, through bolt, sling well with pass through, and a metal buttplate with hinged door for storage. The buttplate shows scrapes, scratches, small dents, and discoloration. The wood shows several scrapes, scratches and compression marks. Most of these marks are small or light. Some have damaged small portions of the surface wood. Most of these marks have been finished over. The LOP measures 13 ? inches from the front of the trigger to the back of the buttplate. The stock rates in about Very Good Plus overall condition.

Bore Condition: The lands are bright, the grooves are light grey, and the rifling is deep. There is fouling and intermittent light erosion in the grooves.

Overall Condition: This rifle retains about 97% of its metal finish. The trigger guard has surface erosion showing through the finish. The barrel and top cover show scrapes. The top cover also shows an area of thinning.  The remaining metal shows scuffs & light handling marks. The screw heads show heavy use, but have been refinished. Most of the markings are deep. Overall, this rifle rates in about Very Good Plus to Fine condition.

Box, Paperwork & Accessories: The rifle comes with a refinished ten round magazine. Areas of surface erosion show through the finish. It shows scrapes & scratches that have removed small portions of the paint finish. It is in about Very Good condition. The rifle comes with an Israeli K98 sling. It shows scrapes & discoloration on the leather as well as light surface erosion on the buckle. Overall it is in about Very Good Plus condition.

Our Assessment: This German K43 (Karabiner 43) was made by Berlin-Lübecker Maschinenfabrik (BLM) back in 1944. It looks great for a WWII era rifle and has lots of significant markings on the metal. After WWII the rifle was Arsenal Rebuilt and issued to East German Border Guards. It is distinctively marked with 2 East German “sunburst” proofs on the receiver. This is a collectible rifle that can put 8mm downrange as fast as you can pull the trigger.