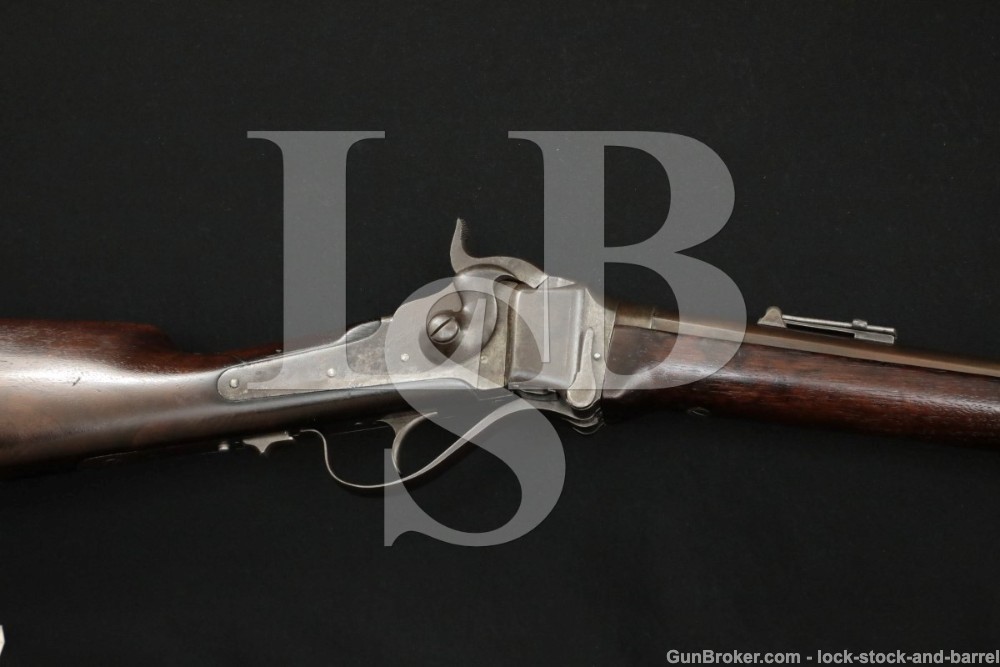 Sights / Optics: The front sight is a low profile blade integral to a rectangular base at the muzzle. The rear sight is a Lawrence patent folding ladder sight. The top tang is drilled, tapped and filled for a tang sight (none present).

Stock Configuration & Condition: The stocks are two-piece smooth wood with a metal nosecap and three barrel bands on the musket-style forend, straight grip, straight comb, steel buttplate, a sling swivel mounted in the belly and another mounted on the middle barrel band. The stocks have some scattered light nicks, scuffs and scratches. There is wood fill at the front of the ramrod slot in the forend, around the rear edge of the forend and three spots of fill on the right of the forend at the top-rear. There are thin cracks at the toe on each side, a crack in the right of the wrist between the top tang and the lockplate, one at the left-rear of the bottom tang, and a few minor grain-line cracks at some edges. The LOP measures 13 3/4? from the front of the trigger to the back of the buttplate. The plate has mostly gone to a moderate patina with wear and erosion, mostly at the heel and toe. Overall, the stocks are in about Very Good as refinished, repaired Antique.

Bore Condition: The bore is gray with sharp rifling. There is scattered light erosion in the bore with less frequent spots of moderate erosion and pitting.

Overall Condition: This gun retains about 30% of its current metal finish. The metal surfaces’ remaining finish is scattered and mottled with wear and discoloration from oxidation. There is some scattered surface erosion, mostly in the receiver. There are some scattered light nicks, scuffs and scratches, most notable around the front barrel band. The action shows operational wear. The screw heads range from sharp to tool marked with strong slots. The markings range from clear to worn, but legible. Overall, this gun rates in about Very Good condition as refinished Antique.

Mechanics: The action functions correctly. The lever locks up tight. As with all used firearms, a thorough cleaning may be necessary to meet your maintenance standards.

Our Assessment: Christian Sharps introduced one of America’s first and most successful breech-loading rifles with design starting in 1850 and improvements continuing into the 1870s and the metallic cartridge era. This is an example of a cartridge-firing Sharps, and a fairly uncommon one at that. There were only 1769 of this model produced, only 1,328 of which were made at the Hartford factory before Sharps moved to Bridgeport. Interestingly, the model designation “1874” is something of a mystery. Production of this model began in 1871, but the rifles were simply marked “New Model”. When the Model 1878 was introduced, it was decided that “Old Model” was not a particularly good marketing term and “1874” was chosen to designate the earlier gun. This example, then, is one of those made before 1874, though it would now be considered a “Model 1874”. More intriguingly, this 1874 Military Rifle has Belgian proof marks. It’s unclear if some Belgian citizen simply wanted themselves a Sharps chambered for .50-70 or if it was perhaps brought across the Atlantic for some sort of military testing. The metal and wood have been refinished, so the rifle looks good for its age. This scarce 1874 Military Rifle will make a nice addition or start to a Sharps rifle collection, especially with its Belgian markings. Please see our photos and good luck!