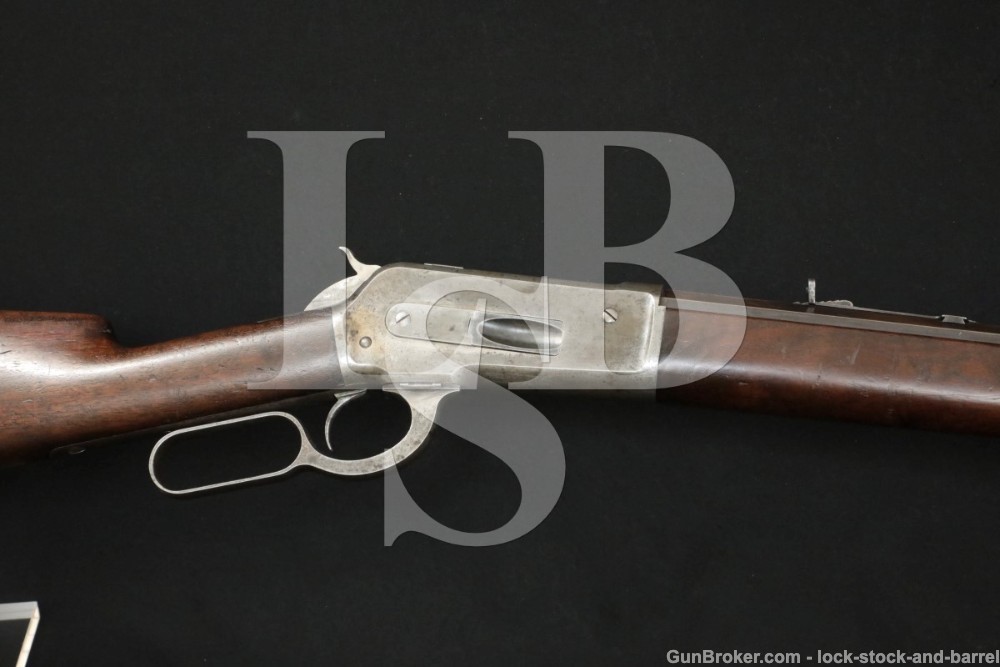 Caliber: The barrel is marked for .38-56 WCF, but the barrel has been bored out. We believe that it was re-chambered for .45-70 Gov’t, but the chamber should be cast to confirm prior to firing.

Stock Configuration & Condition: The stocks are two-piece smooth walnut with capped forend, straight grip, straight comb and crescent steel buttplate. The stocks have scattered light compressions, nicks, scuffs and scratches. There are a few more notable dings such as on the left-front of the forend, the left of the buttstock near the center and a few dings in the belly including a small, but deep mark which has gone through the surface of the wood. There is a short, thin crack at the left-rear of the top tang. The wood has some discoloration where it meets the metal. The LOP measures 12 7/8″ from the front of the trigger to the back of the buttplate. The plate has mostly worn to white with some minor discoloration from oxidation and wear at the heel and toe. Overall, the stocks are in Very Good condition as Antique.

Finish Originality: Most remaining finish is Original, some worn areas on the barrel show treatment with cold blue in the distant past.

Bore Condition: The bore is mostly bright. The rifling is sharp. There is infrequent minor erosion in the bore.

Overall Condition: This rifle retains about 45% of its metal finish. Remaining finish is mostly in the barrel and magazine tube, strongest on the top of the magazine tube and around the sights. Other surfaces are mottled with wear and light patina. The receiver is mostly worn to white, showing scattered minor surface erosion and some discoloration from oxidation. There’s a little case color visible on portions of the lever which are concealed with the action closed. There are scattered nicks, scuffs and scratches. The action shows operational wear. The screw heads range from sharp to tool marked with strong slots. The markings are clear. Overall, this rifle is in Very Good condition as Antique and re-chambered.

Our Assessment: Winchester’s first attempt at a lever action rifle capable of handling a rifle cartridge was the Model 1876, which was a heavier framed version of the Model 1873. However, the toggle-link action used in the gun was still limited to short cartridges like the .40-60 and .45-60 Win. The Model 1886 was made to handle longer cartridges like the .45-70 Govt., and the .45-90 Win. and .50-110 Win. cartridges. The Model 1886 utilized a locked-bolt action that was much strong than the M1876, and some think it is faster and smoother as well. The Winchester Model 1886 was touted as a lever action express model, capable of handling any of the North American game animals. This rifle was originally chambered for .38-56 WCF, but appears to have been re-chambered in .45-70 Governmentt, though the chamber should be cast to confirm prior to firing. It has a solid brass front sight, but the rear sight appears to be original. The rifle was made in 1892, fairly early in M1886 production, made during the period when Winchester was producing the rifle with a case colored finish to the receiver, lever and nosecap. It is in about Very Good overall condition as Antique and modified, and the bore is in great condition, indicating that it may have been bored-out relatively recently. This rifle has seen some honest wear, but the action still functions and the bore is still shootable. Please see our photos and good luck!