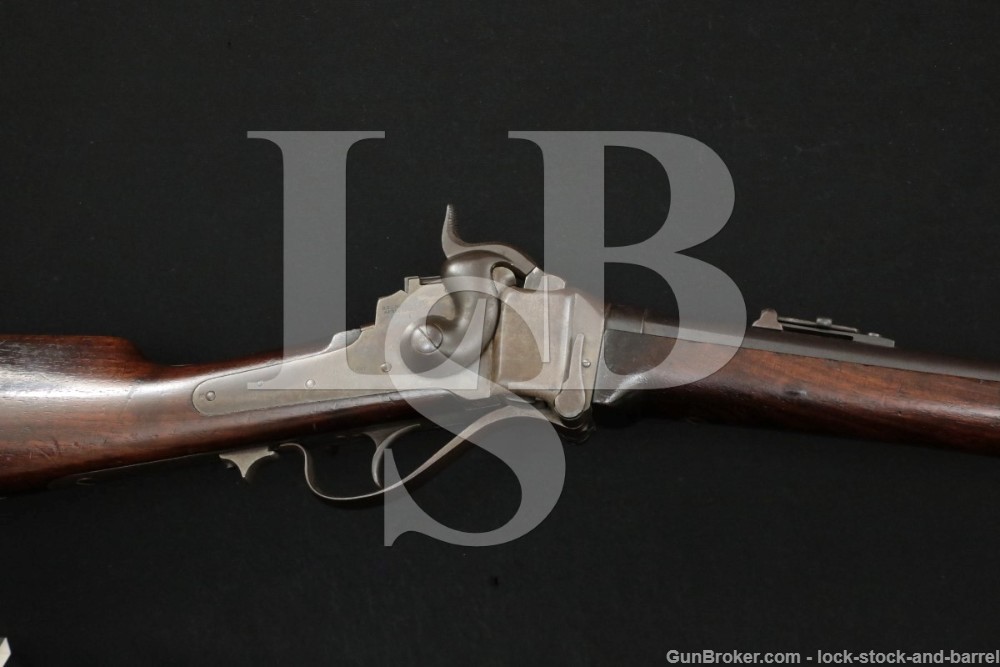 Year of Manufacture: The rifle was originally manufactured between 1863 and 1865. It was converted to cartridge use in 1867.

Stock Configuration & Condition: The stocks are two-piece smooth walnut with a banded forend, straight grip, straight comb, and steel buttplate. There is a sling bar inlet into the left side of the wrist with saddle ring attached. The stocks have scattered nicks, dings, bruises, scuffs, and scratches. There is a patch of more notable wear at the toe. The comb has two holes toward the heel with wear indicating that some sort of plate may have been mounted there in the past. There are a few scattered tiny losses at edges. The LOP measures 13 3/4” from the front of the trigger to the back of the buttplate. The buttplate is going to a light patina with some scattered solid erosion. Overall, the stocks are in about Very Good condition as Antique.

Bore Condition: The bore is mostly bright with sharp 6-groove rifling. There is infrequent minor erosion in the bore with some spots of light pitting in front of the chamber.

Overall Condition: This rifle retains about 65% of its current metal finish. The barrel has areas gone to a light patina with strongest finish under the forend and around the sights. The barrel has some scattered solid erosion and a few scattered light nicks and scratches. The receiver has areas of strong case color with some areas muted or gone to a light patina. The action shows operational wear and there is light oxidation on the lever. The screw heads range from sharp to tool marked with strong slots. The markings range from clear to worn and incomplete. Overall, this rifle is in Fine condition as converted and Antique.

Mechanics: The action functions correctly. Characteristic of the 1867 conversions, the firing pin has a return spring. The hammer has a half-cock safety position. There is a push-button lever lock on the lower tang. The action is tight, and the lever locks up well. We have not fired this rifle. As with all used firearms, a thorough cleaning may be necessary to meet your maintenance standards.

Our Assessment: The Sharps New Model rifles and carbines were made in three models: 1859, 1863 and 1865. From Flayderman’s, over 100,000 of the 1859 and 1863 models were purchased by the U.S. Army and Navy during the Civil War. The Sharps carbine was the most significantly utilized carbine of the Civil War: it was a single shot percussion breechloader using paper cartridge and revolutionized hand weaponry at the time. After the war, a little over 31,000 carbines were converted to fire centerfire ammunition. Some used the original .52 caliber barrels, and those that had worn barrels were relined and chambered for .50-70 C.F. There were a couple of different conversion designs and this is one of the scarce New Model 1863 carbines that was converted to cartridge use as a Model 1867. The distinguishing characteristic of the 1867 conversions was a sprung firing pin assembly, later changed to a simple cammed firing pin in the 1868 conversions to reduce the number of new parts. This example apparently did not need a re-lined bore, still having 6-groove rifling, but the bore is in shockingly good condition given its age. This carbine is in Fine overall condition as Antique with about 65% of its current finish remaining. The action is tight and functions correctly. The sling bar is present, along with its saddle ring. The Sharps rifles and carbines represent a great period in the history of American firearms – they participated in the last great war in which percussion rifles were used, and their post-war conversions were among the first rifles to use metallic cartridges. These rifles are highly collected, primarily because there are so few still remaining. This scarce M1867 cartridge conversion will be a great addition to any collection of Civil War or early cartridge firearms. Please see our photos and good luck!