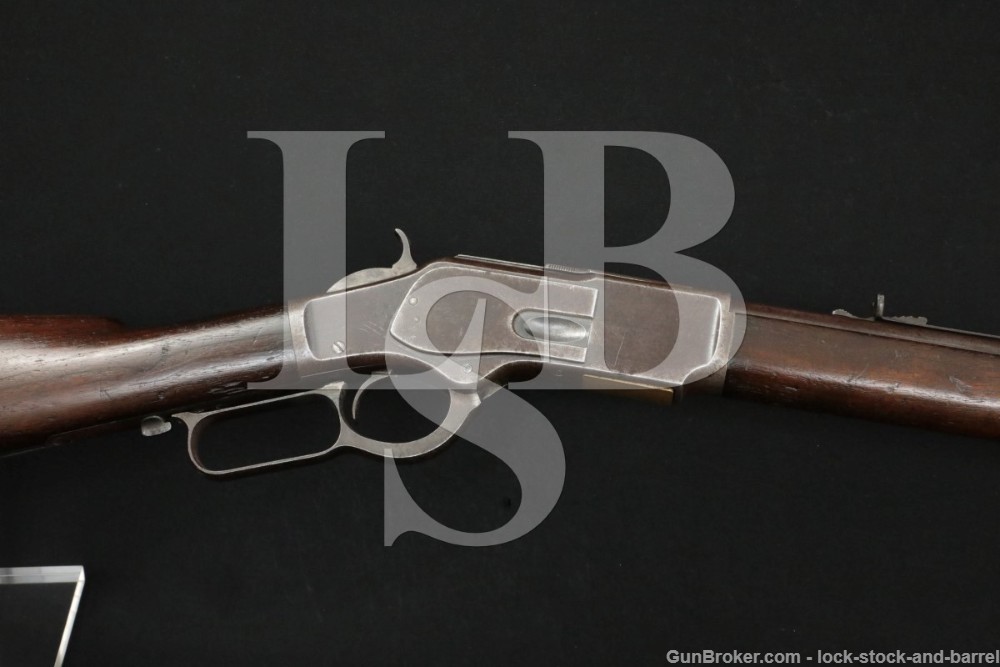 Stock Configuration & Condition: The stocks are two-piece smooth walnut with capped forend, straight grip and crescent buttplate with a sliding door in front of a storage compartment in the butt. The stocks have scattered nicks, dings, scuffs and scratches. Some have damaged portions of the surface wood. There are no chips or cracks. The LOP measures 12 5/8? from the front of the trigger to the back of the buttplate. The plate has mottled patina with light wear. There are some stubborn marker stains on the buttplate. Overall, the stocks are in about Very Good condition as Antique.

Bore Condition: The bore is gray with worn, but visible rifling. There is light-moderate erosion scattered in the bore.

Overall Condition: This rifle retains about 15% of its metal finish. Finish remains in protected areas such as the bottom of the barrel, top of the magazine tube and around the sideplates. Other surfaces have worn to white or gone to a light patina. There are scattered nicks, scuffs and scratches. There are notable tool marks around the lever screw and the top tang screw with lighter tool marks around most other screw heads. The action shows operational wear. The screw heads range from sharp to disfigured with serviceable slots. The markings are clear. Overall, this rifle is in about Very Good condition as Antique.

The .44-40 Win. cartridge, also known as the .44 WCF, was introduced by Winchester in 1873 as Winchester’s first metallic centerfire cartridge with a number of WCF cartridges to follow. Colt produced single action revolvers chambered for the Winchester cartridges as well, allowing users to have a rifle and handgun which shared the same ammunition.

The rifle is in about Very Good overall condition, appearing to have had a very useful life. The bore is still fair, though it shows the expected erosion of use with black powder over the last century, and there is still some original blue finish remaining. The rifle is in quite good mechanical condition. It deserves a spot in a collection of lever action rifles next to its 1866, 1876, 1886, 1892 and 1894 cousins.