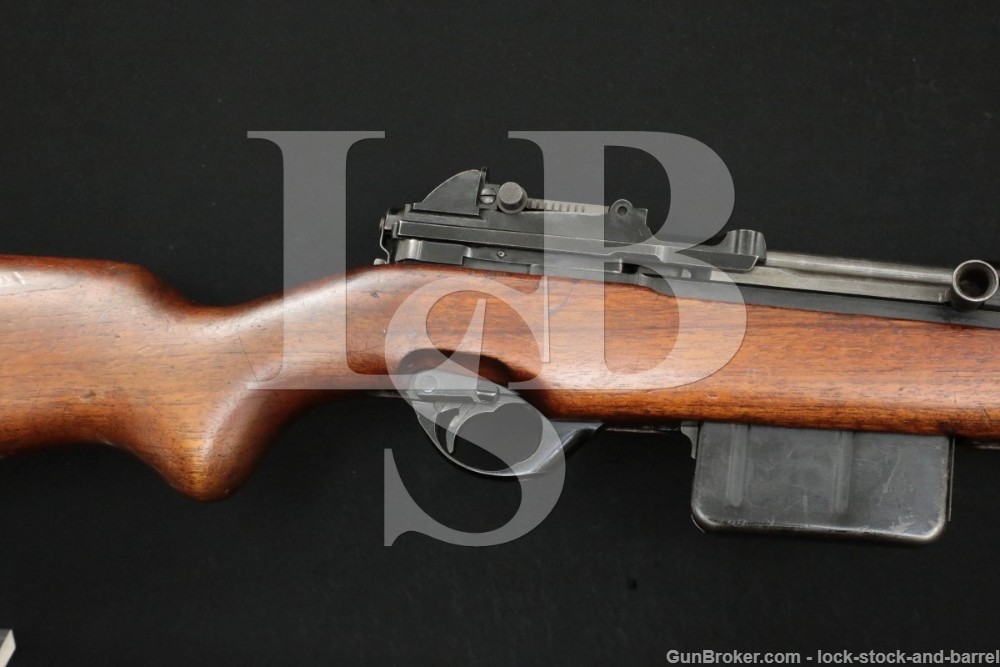 Stock Configuration & Condition: The two piece hardwood stock has a pistol grip, finger grooves, metal nosecaps, barrel band, 2 sling loops, and a metal buttplate with hinged door for storage in the butt. The buttplate shows several scrapes & scratches as well as thinning. The stock shows numerous scrapes, scratches, and compression marks. Several have damaged small portions of the surface wood. The LOP measures 13 ¼ inches from the front of the trigger to the back of the buttplate. The stock rates in about Very Good overall condition.

Bore Condition: The muzzle & grooves are light grey. The rifling is deep. There is light erosion in the grooves and at the muzzle. The bore shows an M.E. of -1 (negative 1).

Overall Condition: This rifle retains about 90% of its metal finish. The metal shows several scrapes & scratches which have removed areas of the black paint finish. The exposed metal shows discoloration from oxidation. The screw heads show light use. The markings are deep. Overall, this rifle rates in about Very Good condition.

Mechanics: The action functions correctly.  We did not fire this rifle. As with all used firearms, a thorough cleaning may be necessary to meet your maintenance requirements.
The cocking indicator is located at the bottom front of the trigger guard.

Box, Paperwork & Accessories: The rifle comes with one black magazine. It shows several scrapes & scratches which have removed areas of the black paint finish. The exposed metal shows discoloration from oxidation.  It is in about Very Good condition.

Our Assessment: This rare Luxembourg contract FN 49 was made sometime in the early 1950’s by Fabrique Nationale of Belgium. Luxembourg purchased a total of 6,003 FN 49 rifles. This one has the large “AL” marking on the top of the receiver that identifies the rifle as a Luxembourg contract FN 49. It is chambered in .30-06 Springfield and has nice markings. The markings include matching part numbers on the receiver, top cover, and bolt. It will be putting .30-06 ammo down range for a long time to come.